Anna pulls the shocker of the 2019 football season…Stunning performance to whoop up on previously unbeaten Coldwater…Bixler and Huelskamp combine for seven touchdowns and 300 yards of offense.

The crowd was stunned, as were area football fans and probably both teams involved.

The fifth-ranked Rockets, you see, had looked human a few short weeks ago when they were defeated by Marion Local, 17-14. Nothing like a little piece of humble pie to get your head right.

“The Marion loss was good for us in a lot of ways to get some things corrected,” Anna coach Nick Marino said. “We didn’t have a lot of adversity before that game. We had some adversity in that game, obviously, and we didn’t respond real well. We had a running clock in every other game, except for that one. I think in that situation we weren’t ready to go when things got tight. Tonight was a good test to do that, and our kids came out and played really well.” 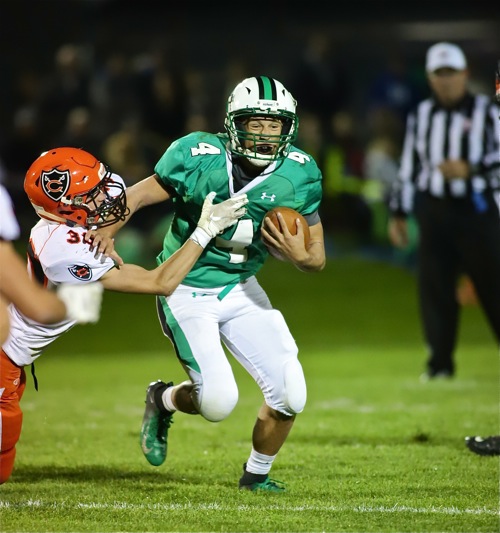 Quarterback Bart Bixler ran 15 times for 161 yards while completing 7 of 8 passes for 76 more.

How exactly did it happen? Well, Anna’s two stud athletes, quarterback Bart Bixler and running back Riley Huelskamp, ran wild — combining for seven touchdowns and more than 300 yards of offense. Anna’s defense, meanwhile, shut down top-ranked Coldwater’s high-powered offense –outgaining them 397-172. For further context, the Cavaliers hadn’t been held to less than 37 points in any of their previous seven consecutive wins.

“Physically up front, the things we thought would work for us didn’t work,” Coldwater coach Chip Otten said. “They were getting after us. Their front guys are just big, stout kids. They were mixing blitzes, and their secondary is good, too. They can afford to play man on your wideouts and they press them. We didn’t make them pay, so then they walked their safeties down in there and they had extra guys getting in on those plays.” 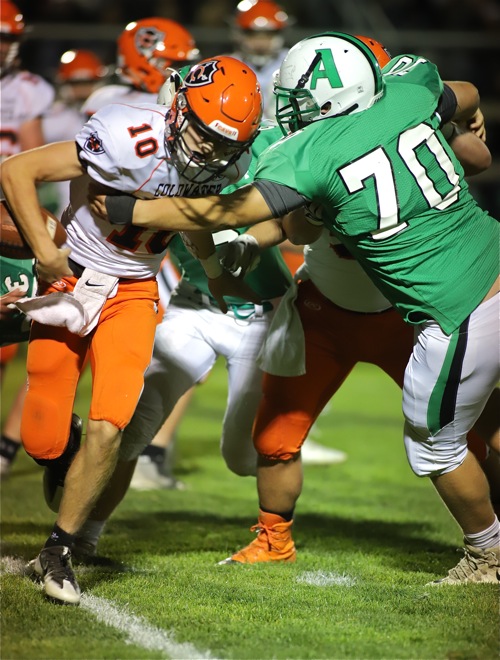 Coldwater QB Jake Hemmelgarn has the ball punched out by Anna’s Grant Albers (#70).

Bixler sprinted to paydirt from 23 yards away with 8:49 to go in the first quarter, and it escalated quickly from there.

Following another stop by Anna’s defense, Coldwater had a punt sail just nine yards. Bixler then faked a pitch to Huelskamp, hit a gap and was gone for a 26-yard touchdown. He finished off the first quarter with a 12-yard run into the end zone for a 21-0 lead.

The Cavaliers couldn’t convert a fourth-and-short inside their own territory on the next drive. Bixler then found Jeffrey Richards for a 33-yard touchdown.

Coldwater fumbled on its first play of the next series. It led to a nine-yard rushing score by Huelskamp less than a minute after Anna’s previous touchdown. Bixler finished the half by finding Hayden Huelskamp for a three-yard TD.

“We played well, and they didn’t,” Marino said. “They are a better football team than what they showed tonight. We expect they’re going to be good the rest of the year. I think they’ll maybe win two more games and get into the playoffs.” 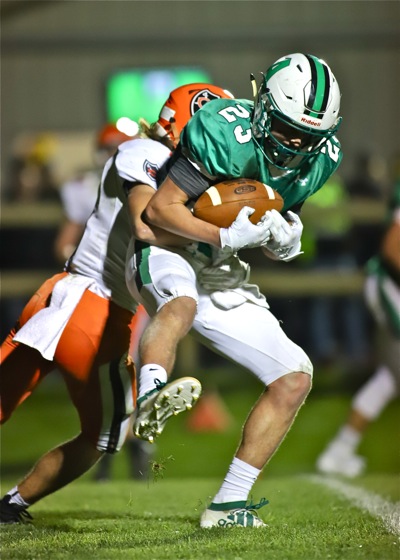 Isaac Lininger makes a catch while being wrapped up by a Coldwater defender.

With Minster’s 27-26 win over Marion Local, the MAC is now in a four-way tie for first between those two teams, Anna and Coldwater with two games remaining. The Rockets, Cavaliers and Wildcats are all highly likey to make the Region 23 playoffs.

Bixler had 15 carries for a game-best 161 yards. He also completed 7 of 8 passes for 76 yards. Riley Huelskamp, the MAC’s leading rusher, carried the ball 20 times for 148 yards.

“Bart and Riley did a lot tonight,” Marino said. “A lot of attention goes to Riley, which leaves Bart open. It’s hard to defend.”

“They physically took it to us,” the Coldwater coach contributed. “We talk about their two backs, even the times we were in position, they were quicker and faster and just beat us.”

As for Coldwater’s normally dominant offense … quarterback Jake Hemmelgarn threw for a season-low 72 yards on 9 of 20 completions and registered minus-one yard on seven carries. Noah Miller had four catches for 37 yards.

How bad a night was it for Coldwater?  It was the first time in their history that the Cavaliers played against a running clock!

“They turned the ball over, which isn’t what they typically what they do,” Marino said. “Our kids played well and created those. Definitely a fun night .. a real fun night.”

A fun night or a flabbergasting night. Whatever you want to call it, Anna beating Coldwater like they did … Who’d of thunk it? 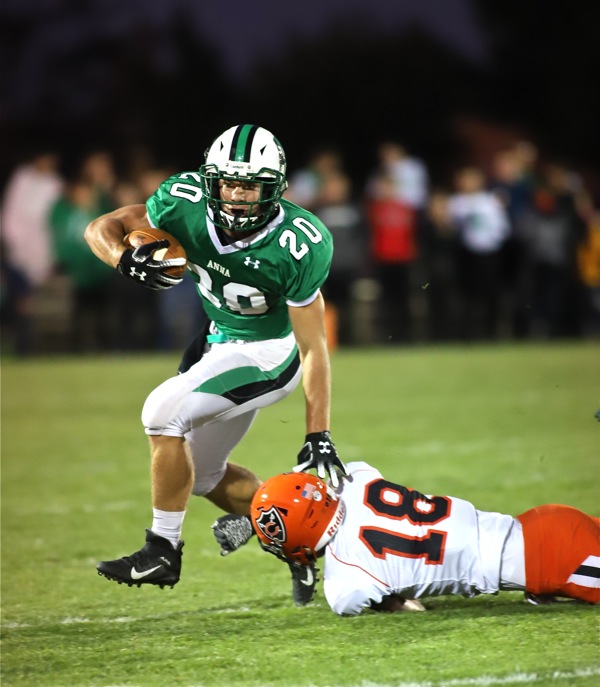 Riley doing what Riley does...Anna's Riley Huelskamp bust through a tackle attempt on his way to 20 carries and 148 yards. (Press Pros Photos by Don Selanders)