They gave up more yards and points than they would have like, but for good reason.  Nonetheless, the Dayton Flyers improved to 4 and 1 with a win in Indiana over Valparaiso.

VALPARAISO, Ind. — University of Dayton football coach Rick Chamberlin and his staff knew Saturday afternoon was not going to be a walkover – would not be a beatdown.

And why would that be? Valpairso University was 0-and-5 and so far this season moving the football was like Sisyphus pushing the boulder up a hill.

The Crusaders, though, were blessed with inside information. Their first-year coach is Landon Fox and he spent the previous 11 years as UD’s Defensive Coordinator.

He knows the Flyer better than they know themselves.

Chamberlin was so wary of Fox that the Flyers did not call defensive signals out loud, realizing Fox knew them. Instead, Chamberlin issued all his defensive players wrist bands with the defensive schemes printed on them.

It worked. . .at least well enough for the Flyers to escape with a 41-28 Pioneer Footbll League victory on a cold, wind-swept Brown Field.

Fox, of course, coached like a fox, using his knowledge of the Flyers to put on an offensive show.

In their five losses, they did not have a rushing play over 20 yards. On the first play of their second possession, quarterback Chris Duncan circled right end and bolted 76 yards untouched by Flyer hands for a touchdown. 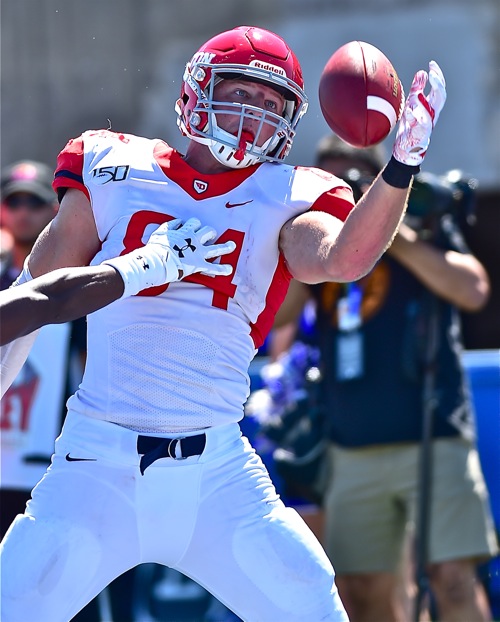 Play of the day? A one-handed touchdown catch by Adam Trautman from Jack Cook…one of his three on the day.

So how did the Flyers win this one to improve to 4-and-1, 2-and-0 in the PFL? The same way they always win. Score, score, score and score some more.

They were never in trouble after building a 14-0 first quarter lead. But the Crusaders would not go away.

The Flyers were led by the usual suspects. Quarterback Jack Cook, as efficient as an IRS auditor, as usual, was 23 for 28 for 277 yards, three touchdowns and no picks.

And his usual tall and talented receiver, Adam Trautman, was helmet-and-shoulders above all receivers with 10 catches for 122 yards. And he caught all three Cook TD tosses.

Along the way, Trautman set another record — all-time career TD catches for UD. He passed Pat Hugar with his first TD and now has 29.

“Landon had ‘em ready,” Chamberlin said about Fox. “He had a lot to do with their success against us. We used wrist bands so we weren’t shouting signals that he knew.

“He told his offensive coaches, ‘This is how they play this coverage,’ when they like to blitz, because he knows me. And his kids played hard, they really did.”

Chamberlin realizes, though, that the defense needs to shore up, plug some holes, quit making assignment mistakes.

“Defensively, we’re still giving up too many big plays,” he said. It is mostly mental. When we watch the film, I know I will not be happy with our hits, our coverage. And offensively, I thought we kind of lost our poise at times, which our team hasn’t done all year. 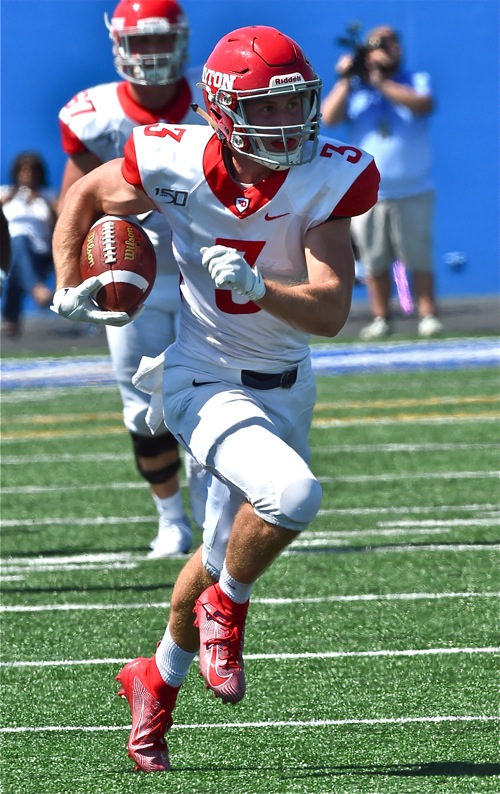 Ryan Skibinski had another good day…four catches for 41 yards.

“Defensively, we came up with some big fourth down plays,” he added. “We’re still not playing completely, not real sound. We lucked out a couple of times when we were wrong defensively and they just didn’t execute properly.

Perhaps the Flyers thought this one would be an easy walkabout, especially after jumping to an early 14-0 lead.

They scored two plays into the game. The first play was a 28-yard Cook to Trautman strike. And the second was a 35-yard touchdown strike to Trautman.

But, oh what a play the TD play was, right out of Professor Gadget.

Quarterback Cook lined up on the left as a wide receiver. Running back Jake Chisholm lined up wide right. Wide receiver Kyle Butz took the direct snap from center.

Butz handed the ball off to Chisholm, making it look like a jet sweep left. But Cook circled behind him, running right, and took a lateral from Chisholm.

By now the defense was dizzy and Cook lobbed one high into the end zone. As a point of emphasis, Trautman caught it one-handed.

‘It’s called ‘Eagle,’” said Cook. “I don’t know why. We ran it last year, but Ryan Skibinski dropped it. I saw Trautman come wide open. Touchdown. Great catch, though. One hand. Palm down his leg to trap it. It was awesome.”

Skibinski wasn’t in on this play, but he didn’t drop anything this day, either. He made four catches for 41 yards. 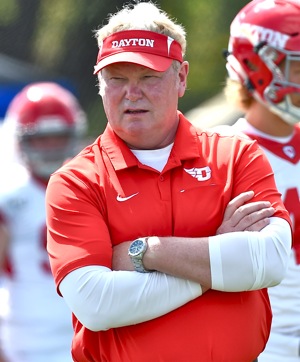 “We’re still making too many mistakes.  We lucked out a couple of times when we were wrong defensively and they just didn’t execute properly.”  –  Rick Chamberlin

Perhaps the biggest statement the Flyers made came early in the fourth quarter. It was 34-21 and Valpo matriculated from its 39 to the Flyers’ 10,

They had a third-and-two. UD’s Colt Whitman sacked Duncan for a four-yard loss. On fourth-and-seven Duncan completed a pass, but Whitman and Zach Rumpke stopped the play two yards short.

Valpo had covered 66 yards in 14 plays and ’21’ remained on the scoreboard.

The Flyers then embarked on a 93-yard trip in 16 plays that gobbled 9 1/2 minutes off the clock and wrapped up the game.

The drive ended with Cook bolting up the middle the final five yards.

“That just showed that we can outwill the human being across from us,” said Trautman. who caught one 19-yard pass on second-and-15.

“We outwilled them on that drive, drove them off the ball,” said Trautman. “We finished blocks and the running backs found the creases. That was huge for us because we just outphysicaled them.”

Last week against Jacksonville, Trautman set a UD record with four TD catches in one game and set the all-time receptions record. This week he set the career TD catches record

After the game, when asked, he paused and said, “Oh, yeah. That’s right, I forgot. Sweet. Feels good. Just like last week. All the hard work you put into the program and into your game personally. When it pays off, man, it feels really good.” 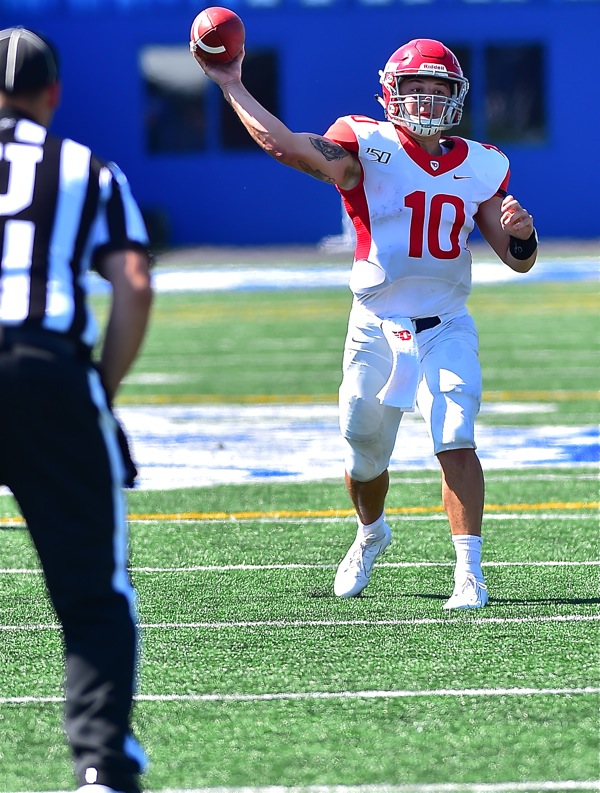 Jack Cook did was Jack Cook does... 23 for 28 for 277 yards, three touchdowns and no picks in the Flyers' win over Valparaiso. (Press Pros Feature Photos by Sonny Fulks)