A late punt return by AJ Lovin sets up winning touchdown, and a fumble recovery by Kayge Thwaits snuffs a late threat in Milton’s 18-13 win over Preble Shawnee.

West Milton, OH – Except for parents, buddies and girlfriends, the Homecoming crowd was long gone by the time Milton-Union players rang the victory bell at the south end of Memorial Stadium.

Whipping winds and misting rain that appeared to be coming from a giant spray bottle held above the field chased away the spectators.

That was far from being the worst part of it for anyone wearing a Bulldogs uniform. Preble Shawnee almost chased them out of the Southwestern Buckeye League Buckeye Division championship race and blew up their playoff hopes in one swoop by giving everyone the heebie-jeebies until the final whistle.

Milton-Union needed four defensive stops in the second half and a 45-yard punt return by A.J. Lovin that set up the winning touchdown, a 1-yard run by Kayge Thwaits with 3:46 remaining in the third quarter, to pull out an 18-13 victory Friday night.

“I think we showed a lot of resiliency because the weather certainly played a big part in this game,’’ coach Bret Pearce said. “We had a couple of injuries that hampered some of the things we like to do. But our kids stepped up and made big plays at key times for us.’’

The Bulldogs (6-1) remained one game behind Waynesville in the division and stayed in the thick of the computer playoff race in Division IV, Region 16 with three games to play.

History said that Preble Shawnee (2-5) would be a pushover. It lost nine straight games in the series coming in, and all were blowouts except for one.

But it has not been a softie during this three-week stretch. In Week 5, they lost to Waynesville 28-21. Last week, it was a 38-36 loss to Franklin.

Pearce and his players knew better than to play cocky.

“We’ve been watching them,’’ Pearce said. “Their record isn’t that great, but they played Franklin to a two-point game. They played Waynesville in a seven-point game. We knew they could score on any play. They have some great skilled players.’’

It was a zany night for Milton-Union as mistakes by both teams carried the night. The Bulldogs had what looked to be a certain touchdown pass dropped in the end zone, two passes intercepted, one punt blocked and enough penalties to push it all the way back to Tipp City. 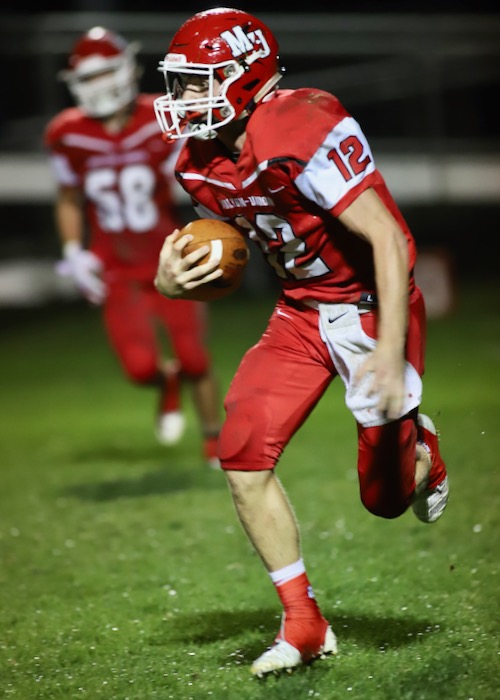 Quarterback Nathan Brumbaugh hotfoots it for yardage in Friday’s win over Preble Shawnee.

Ah, but there were plenty of clutch moments for the defense:

Sophomore Keris Thwaits, who was starting because of an injury, deflected a pass on fourth down with Preble Shawnee at the 13-yard line with 48 seconds left in the third quarter.

After Kayge Thwaits had a punt blocked on what amounted to a jailbreak rush up the gut, the Arrows had the ball at the Bulldogs 28-yard line with 1:56 remaining. On the next play, Thwaits was on the spot to recover a fumble when the quarterback-running back exchange was muffed.

“I saw the ball right away,’’ Thwaits said. “At that point, we were just trying to come through as a team, mainly on defense. We had to stop them, not let them get into the end zone. As soon as I saw that ball, I knew it was game.’’

It was clear that the Arrows’ Ben Hobbs had his arms around the football first, but that Thwaits took it away with sheer will.

“I did wrestle it away from No. 15,’’ Thwaits said. “And he’s not a small kid by any means. Anything at all costs, that’s for sure. I had to get it. That was a big weight off my shoulders after the blocked punt. That’s a good team over there, but I think we showed more heart.’’

Finally, Milton-Union, sitting in a prevent defense, stopped a last ditch dump pass at its 15-yard line as time ran out.

Everything started out so beautifully for the Bulldogs. They went 71 yards in 12 plays to score on a 1-yard sneak by quarterback Nathan Brumbaugh on the first possession of the game. The extra point attempt was short. 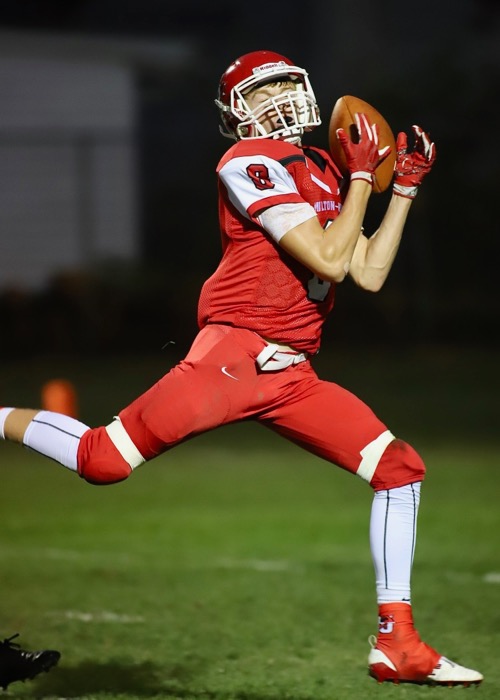 The Arrows took a 7-6 lead on a 4-yard run by Eyan Haemmerle on the first play of the second quarter, and the Bulldogs answered on the next possession by driving 61 yards for a touchdown on Thwaits’ 3-yard run.

The play that gave Milton-Union its only smooth sailing of the night came on Lovin’s punt return. He caught the ball on the run in front of his bench and zigged and zagged 45 yards to the 5 to set up the winning touchdown.

“I had some great blocking,’’ Lovin said. “Honestly, I didn’t think the play would go that far. I could have scored, but didn’t break a tackle. All that matters was that we scored.’’

The victory set up a home game against Valley View next week that will be an 18-wheel semi-truck full of playoff points. The Bulldogs are going after their third playoff spot in five seasons, but first since 2016.

“That’s going to be a tough battle,’’ Thwaits said.

The Bulldogs, Lovin said, are trying to snare their goals the final three weeks of the regular season.

“The past couple of weeks haven’t been our weeks, but we’re sticking together and fighting together,’’ he said. “I’m proud of my team. The league and playoffs are our two biggest things right now. It’s going to be tough. We’ll be ready for it.’’

Pearce said Preble Shawnee was a confidence-building game in that the Bulldogs were put to the mat, got up and found a way to win.

“Anytime you can get a win and build more confidence, that’s important,’’ he said. “We’ll need to play our ‘A’ game next week, but we had to win tonight to set up that one.’’ 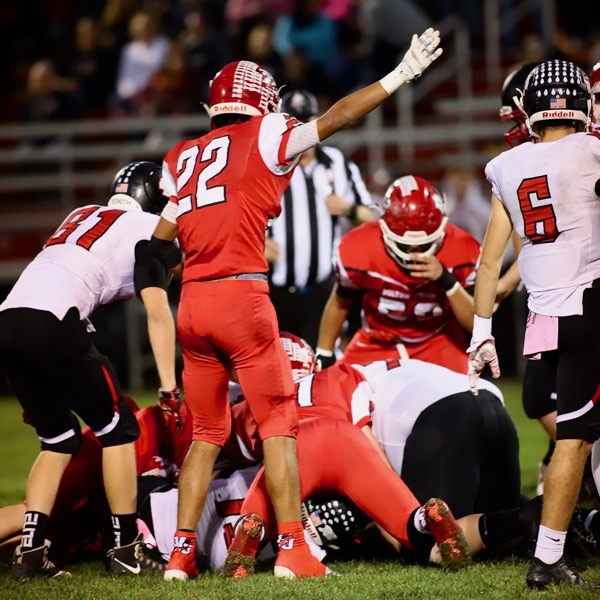 There were plenty of ’em…Milton grabs possession of a Preble fumble in Friday’s win. Milton moves to 6-1 and meets Valley View next week. 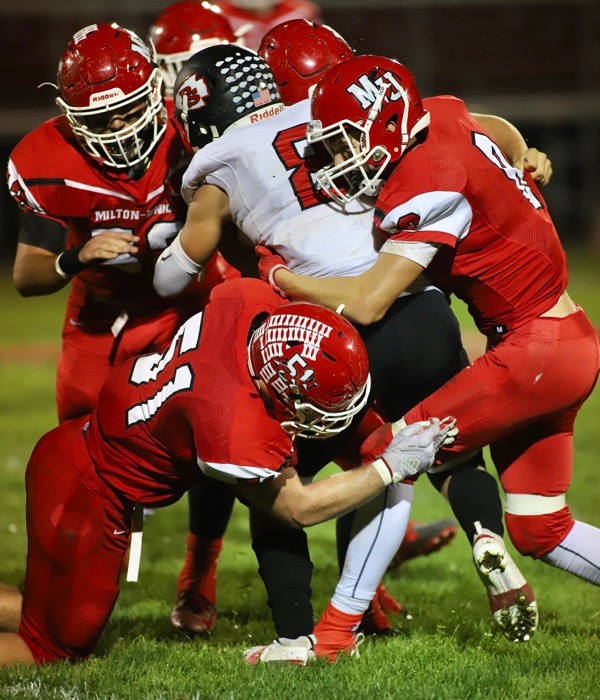 Milton's defense meets at the guy with the football - Preble Shawnee's Austin Tutt - in the Bulldogs' 18-13 win on Friday. (Press Pros Feature Photos by Don Selanders)