COLUMBUS — Justin Fields played all four quarters. J.K. Dobbins and the offensive line had to go the distance, too.

Ohio State was beginning to make us think they might blow the pants off everyone and let the starters clock out early all year. The Buckeyes had a 219-point edge on their opponents through five games — the largest gap they’ve amassed over that span in the AP poll era (since 1936).

They’ve often looked like they’ve been playing against 11 inflatable dummies while winning by an average of 43.8 points.

That couldn’t continue, could it?

Well, no. And if you’ve wondered how Fields and his friends would fare in a sorta, kinda, reasonably close game against respectable opposition, there were plenty of positive signs in the 34-10 win over Michigan State.

After piling up 178 yards and 10 points in the first half, the Spartans managed just 107 yards and went scoreless after intermission Saturday night. Their five second-half possessions: missed field goal, punt, punt, punt, interception.

Leading 27-10 early in the fourth quarter, the stagnant Buckeyes’ offense showed some mettle, rambling 80 yards for a TD in 11 plays.

It was Black-Out Night at Ohio Stadium, and most of the 104,797 fans did their Johnny Cash best to comply. Ohio State wore alternative black unis. And the under-the-lights vibe usually means ramped-up noise and the visiting team withering like an unwatered plant.

But the 25th-ranked Spartans have been in big games here — and won their share of them — and they brought the disposition of their glowering no-nonsense coach, Mark Dantonio.

That’s why the Buckeyes (6-0), who rolled up 529 yards but lacked their usual pizzazz, weren’t downcast afterward. They found something in themselves that lesser foes never brought out. This gang has grit.

“The chemistry of the team is very good. The leadership is strong. We’re playing tough. But I think we can learn a ton from this game,” coach Ryan Day said.

“This is the perfect opportunity to sit back and look at these six games and evaluate where we’ve gone, where we are and where we’re headed. You’re going against a really good defense with really good players and a really good quarterback. They exposed some things that maybe we got away with in the last couple games.”

Michigan State’s offense historically has been straight out of the Stone Age. But senior quarterback Brian Lewerke, who leads the Big Ten in passing yards, has been much better this year, and their attack no longer looks as if it were drawn up by Fred and Barney.

The Spartans (4-2) dropped 40 on Indiana at home and 31 on Northwestern on the road in their previous two games.

They went 75 yards on five plays for a second-quarter TD. And they made the Buckeyes, for the first time all year, look a half-step slow on defense, at least for a half — a bit like the 2018 model.

And, as always, the Sparty defense is legit, mean and menacing, and the Buckeyes had their toughness tested. They were punched in the schnoz right from the opening snap.

Bowlerstore.com, in Versailles, Ohio, is a proud sponsor of Buckeyes sports on Press Pros Magazine.com.

In their first three series, they failed to gain a first down and had minus-4 yards.

By the end of the first quarter, they had just 16 total yards after coming into the game averaging a league-high 535.6.

But Fields made a sweet throw to tight end Luke Farrell for a 21-yard TD, and Dobbins ripped for a 67-yard scoring run to help build a 24-10 lead late in the first half.

The defense then came up with a much-needed stop, and the Buckeyes maneuvered into field-goal range. Blake Haubeil connected on a 43-yarder for a 27-10 edge. 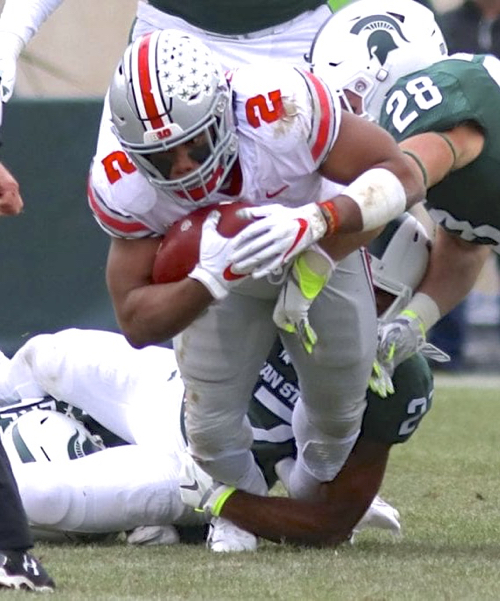 Fields finished 17 of 25 for 206 yards and two TDs while running for 61 yards and another score. That gives him 26 total TDs this year, and as masterful as Dwayne Haskins was last season, the Buckeyes probably wouldn’t trade the NFL first-rounder for what they have now.

Fields did throw his first interception this year after 135 attempts. And the physical game took its toll.

He was limping slightly and stretching on the field between plays. But he has time to heal since the Buckeyes don’t play again until a trip to Northwestern on Oct. 18.

“This is definitely the most banged-up I’ve been after a game, so I’m definitely glad we have a bye week this week,” Fields said.

There are five Big Ten teams aside from Ohio State ranked in the Top 25, and the Buckeyes still have three more of them to go, so Fields probably is going to get bounced around again.

That’s one of the advantages of playing a 60-minute game. Fields had a chance to do more than just display a strong arm, quick feet and a keen mind.

He also showed he can handle a few hits.