Greenville spoiled Tippecanoe’s homecoming festivities with a methodical offense and a few turnovers to stay in contention for the Miami Valley League title.

Tipp City, OH – Taking over a young and inexperienced football team, Matt Burgbacher knew his return to Tippecanoe High School – his beloved alma mater – would come with a few bumps and bruises.

Friday night was one of those nights. No longer a Homecoming cupcake, the Greenville Green Wave crowned themselves as Miami Valley League contenders with a 21-7 victory over Tipp.

Greenville controlled the time of possession, came up with timely turnovers and did enough little things to knock off Tipp. The win moved Greenville to 4-2 overall and 3-1 in the MVL, good for a second-place tie with Piqua and one game behind Troy. Tipp dropped to 2-4 overall and 2-2 MVL.

Burgbacher, a 1995 Tipp graduate, took over the program this season after a successful runs at Troy (30-15 in four seasons) and Fort Loramie (51-18 in six seasons). The Red Devils are no strangers to winning, either, with a run of 12 straight playoff appearances from 2005-16.

But with just five returning starters (three on offense and two on defense) and 10 seniors, Burgbacher knew he was facing a challenge in his return.

“There were high expectations but I wouldn’t want anything different,” Burgbacher said. “There’s still a lot of excitement and there should be. These kids work hard. It’s just going to take a little bit of time.”

The Red Devils could have used a little more of that Friday, too. Greenville’s offense held the ball for a little more than 30 minutes compared to Tipp’s 17. And when Tipp did have the ball, Greenville was still finding ways to get their hands on it.

The Green Wave recovered two fumbles and added one interception that Alec Fletcher returned 52 yards for a 7-0 lead with 5:39 left in the first quarter. Fletcher stepped in front of Jackson Subler’s heave under pressure and sprinted down the Green Wave sideline untouched. 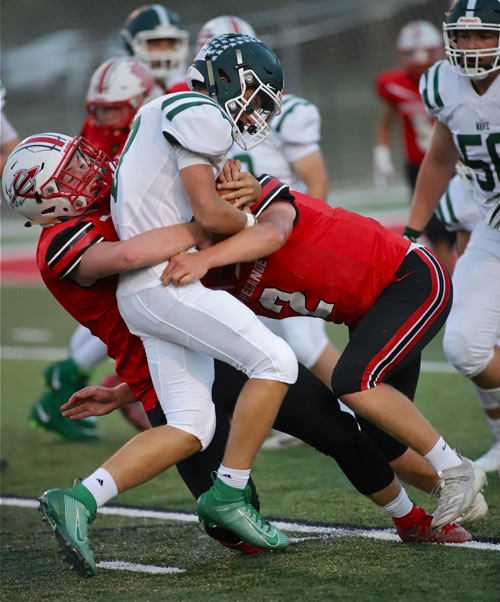 “This is a different Greenville,” Burgbacher said. “Bart (Schmitz) is doing a great job there. It all starts with the attitude of their kids. Their kids played well enough to win.”

Greenville’s defense kept Tipp from crossing the 50-yard line on 11 of the Red Devils’ 14 drives, holding them to 178 yards of total offense. It was an impressive turnaround after giving up 292 yards to Troy in a 35-7 loss a week ago.

“I don’t know if there’s a difference,” said Schmitz, who took over the team after eight seasons as an assistant. “Our kids have always played hard. Tonight, even though we made mistakes, they did exactly what they were coached to do. They believed in the process.”

Greenville led 14-0 with 7:43 left in the first half on Tyler Beyke’s quarterback sneak. That capped a 16-play, 67-yard drive that ran 7:54 off the clock. Beyke’s seven-yard pass to Marcus Wood on fourth-and-4 from Troy’s 32-yard line kept the drive going.

Beyke’s one-yard run with 6:33 left in the fourth quarter provided the final score of 21-7. Beyke completed 9-of-17 passes for 127 yards and two interceptions. He also rushed for a team-high 45 yards on 22 carries. John Butsch had caught three passes for 66 yards and Marcus Wood five for 42. 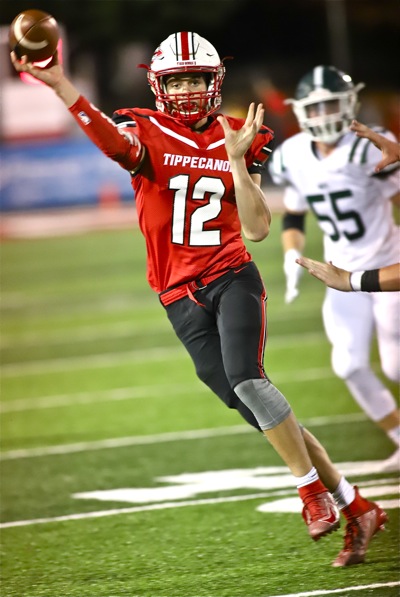 “Even though Beyke threw some picks I thought he managed the game really well,” Schmitz said. “He was able to run out the clock when we needed him to. He got us in the right formations. He’s the leader out there. He did a lot of nice things.”

Greenville finished with 220 yards of offense. They also drove into Tipp territory on nine of 11 drives, but managed just two touchdowns for it. Tipp’s Troy Taylor intercepted a Greenville pass in the end zone in the first quarter and teammate Josh Riffell added another near the end zone in the third.

The Green Wave drove to Tipp’s 9, 42, 23, 14, 42 and 27 yard lines before seeing drives end with two interceptions, two punts, a missed 31-yard field goal attempt and a turnover on downs.

Though Greenville came away with no points on those drives, they ran off valuable time with protection from an offensive line of Alex Strait, Devin Shepherd, Tytan Grote, Terry Miller, Luke Perreira and Colton McCartney.

“That was probably the biggest thing, our offensive line was better tonight. They’re getting better and that’s all you can ask for,” Schmitz said. “They key was to keep the ball out of their hands. Our offense accepted the challenge. When you can hold onto the ball like that, that allows our defense to play fast. It was a team win. It took everybody.

“The kids are buying into the program. It takes everybody involved. I have awesome support from the administration who believe in what we’re trying to do here. That means a million to me. The kids are believing. It’s a special group of kids.”

Burgbacher believes in his kids, too. And how they respond to Friday night’s loss will determine what kind of momentum they take into the offseason.

Tipp let a couple scoring chances slip through its hands Friday. Cade Beam scored on a 21-yard run with 2:26 left in the second quarter to pull Tipp to 14-7. The defense got the Red Devils the ball back with 51 seconds, and Tipp drove to Greenville’s 32. But the drive stalled with three straight penalties including a false start, intentional grounding and illegal block. 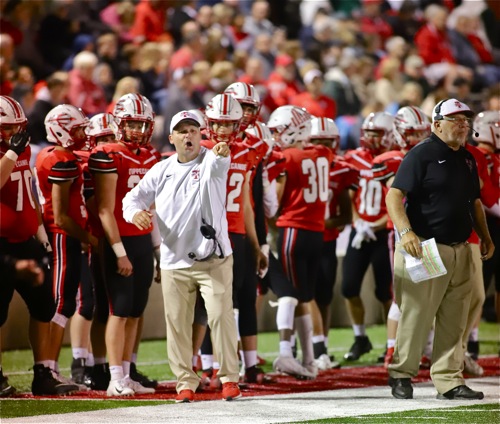 Do you see what I see? Tipp coach Matt Burgbacher was not in a holiday mood during this moment in Friday’s loss.

Tipp’s first possession of the second half ended when the ball popped into the air after the Red Devils’ runner was hit and right into the hands of Greenville’s D.J. Zimmer. Midway through the fourth quarter, Subler threw a sure touchdown that went right through the hands of his receiver near the Wave’s 10-yard line.

“I thought our defense played great,” Burgbacher said. “We couldn’t get going offensively. It seemed like Greenville was the aggressor. We didn’t come out with the right mentality offensively. … We just didn’t play very well. Give Greenville credit. They played better than we did. We had three turnovers and those hurt us.

“Yeah I’m frustrated. But I’m not discouraged. We’re going to keep working. We’ve made a lot of progress. Yeah we took a step back tonight, but we’re not going to let this define who we are. We’re building something special here and we want to keep building.”

Tipp travels to Stebbins next Friday. It’s the Red Devils’ next opportunity to establish their identity for this season. 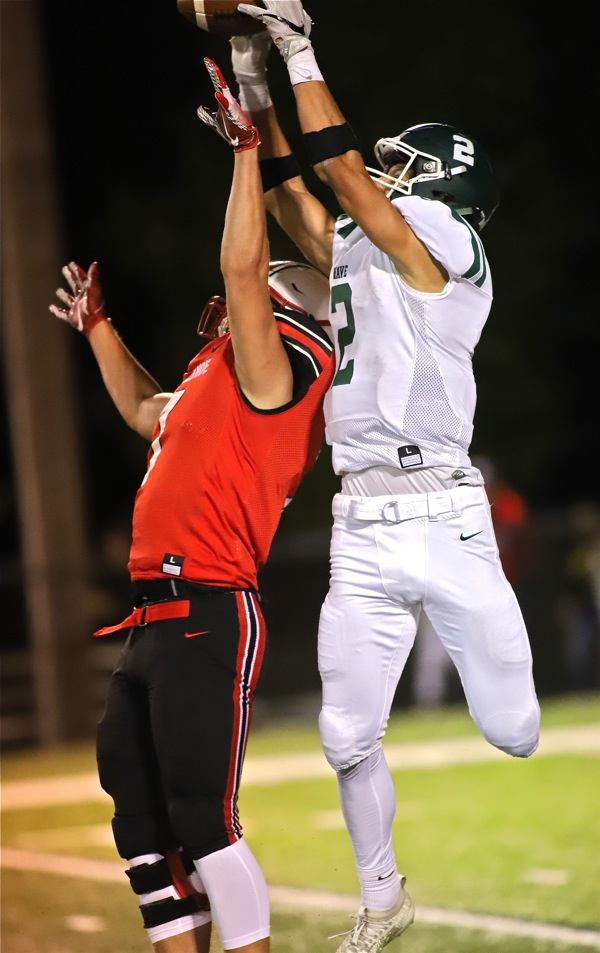 Greenvilles John Butsch skies over a Tipp defender to make a catch in Friday's 21-7 win over the Red Devils. (Press Pros Feature Photos by Don Selander)