With time running down before Sunday’s tournament draw, Versailles drew within two games of .500 with an ‘energetic’ win over Jackson Center, and another match closer to tourney confidence.

Versailles, OH – She’s one of the most positive, upbeat people you’ll find – a silver lining behind every cloud.

But heart of hearts, even Versailles’ Kenzie Bruggeman must admit that the 2019 volleyball season has been a study in frustration, near-misses, and the extreme exercise of patience.  And with time running down toward Sunday’s OHSAA tournament draw, her Tigers took on a Tiger of a different stripe Saturday to draw within two games of .500 for the season…and one step closer to the kind of energy and confidence necessary for tournament success.

They got it in some measure, defeating the former two-time Division IV champs, Jackson Center, in four sets…25-20, 16-25, 25-18, and 25-19.  And along the way Bruggeman got what she wanted to see (in some measure), her Tigers playing with more energy, more confidence, and frankly a little more fun to bring their season’s mark to 9-11 (1-6 in MAC play).

And they did it without Lindsey Winner, their best player, who’s nursing a foot injury, but close to returning.  She sat out Saturday for the sake of another day’s rest, and in her place Brooke Stonebraker, Raegen Shaffer, Emma George and company stepped up to fill the void, exhibiting a confidence in both hitting, and defense at the net.

But mostly, they did it with a measure of energy and enthusiasm missing for much of the season as Bruggeman and company struggled to find combinations that worked, and that could compete in the dog-eat-dog culture of MAC volleyball – New Bremen, St. Henry, Coldwater, Marion, and Fort Recovery.  There simply are no nights off in this community, as evidenced by last week’s loss by Versailles to New Knoxville, who stands sixth in conference standings, but has a 15-5 overall record.

Saturday, like other days and other matches, was not without its inconsistency.  They got off to a great start, taking the first set.  But faltered in one very important element to their game in the second, as Jackson came back to win easily, 25-16. 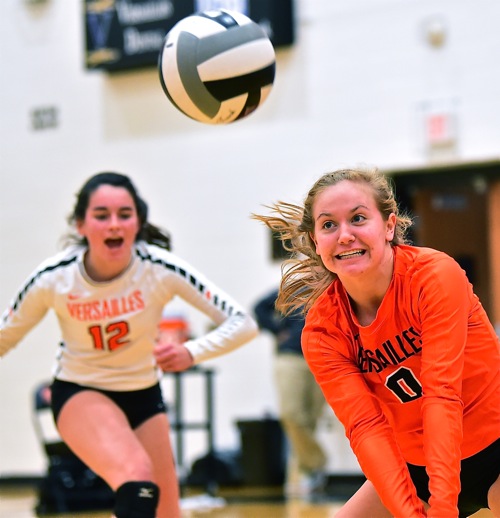 “We live and die by serve receive, and we just didn’t have it in the second game,”  said Bruggeman.  “It was very evident and we have experienced players back there, so I hold them to a very high expectation.  Serve receive was not there that game and we lost.  We got back on track in the other games and we were able to pull it out.”

In the absence of Winner, Stonebraker, George and Shaffer more than made up for her absence, exhibiting a presence of size at the net – a force missing in previous matches.

“I loved it,”  said Bruggeman.  “We are missing Lindsey, but it’s great for them (Stonebraker, George and Shaffer) to see their value in her absence and I know that they can be those players.  This has forced them, they have responded, and it’s just so fun to watch.

“Raegen had some great swings today, and I loved that because we felt that she could be more effective, we worked on it in practice yesterday, and today she was awesome.”

And, there was the added presence of new faces.  Freshman setter Brynn Brisco made her presence felt in the final set. 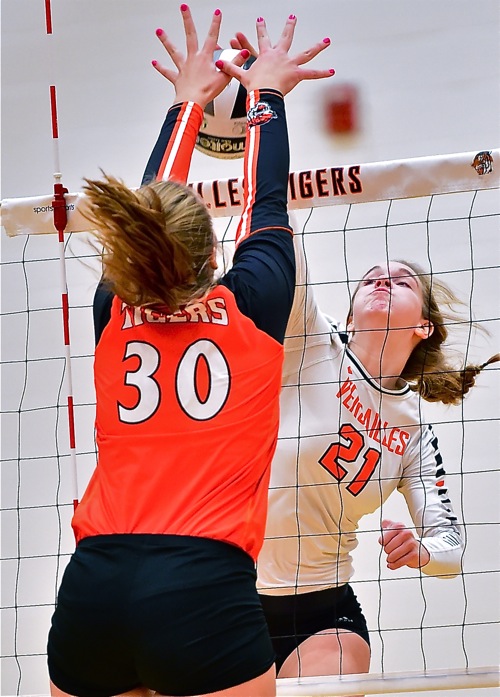 “Brynn is one that we’ve been keeping our eye on all season, she grew up a lot on JV, she’s a very smart player, and we rewarded that by getting her in today and she did a great job,”  said Bruggeman.

But by far the enthusiasm and energy was the most notable difference – a fresh breeze in a season of sometimes stale air.  Stonebraker, George and Shaffer at the net, Kate Greisdorn and Caitlin McEldowney on defense, and a shared confidence by subs who drew from some new-found leadership.

“Absolutely,”  Bruggeman agreed.  “And what I told them in the locker room was that volleyball is a game of simple momentum and execution.  We finally showed some excitement – I challenged the bench to find added excitement for the next point, and how would they make that happen.  They started jumping up and then the people on the court started feeding on their energy.  It’s a really big snowball effect and now we have to keep that going.  They saw today how vital that can be.”

Sunday is the tournament draw, and along with the excitement and momentum is the opportunity to finish next week with wins over Delphos St. John and Fort Recovery.  Win those two matches and the Tigers finish the year at .500 (11-11), which in a way would mirror the manner in which they entered last year’s tournament. 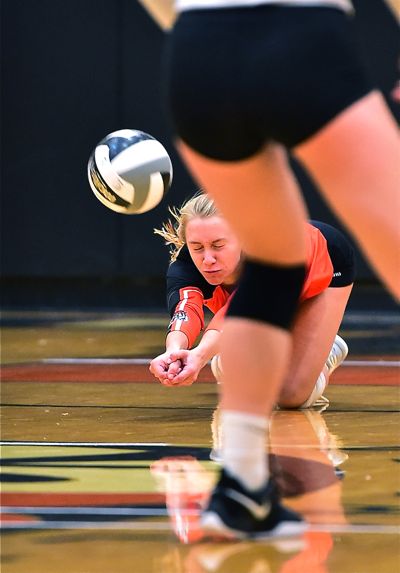 Jackson’s Ashley Mullenhour struggles to save a point in Saturday’s match with Versailles.

“I love tournament season,”  said Bruggeman.  “But we have so much to still work on as a team.  I like where we started the season to where we’re playing right now, and that’s how I gauge our progress and how well I’m doing my job.  And the energy today is big part of that.  We played with confidence today and that’s my measuring stick.  So I’m excited for tournament season because it’s a whole new season.

“We’re so fortunate to be in a conference that pushes you to perform at your highest level every day – to execute every night – and we’ve been in a lot of pressure situations this year.  Every MAC team we play pushes us to be a better team.  And it gives us that experience of going into tournament with a confidence that we can win because we’ve been trained by some of the best teams in the state.”

What she means, of course, is that Saturday was a chance to sharpen their claws for the post-season, as Delphos will be on Tuesday and Recovery on Thursday.  And consider, if they win they go in with a mark of 11-11.  A year ago they began tournament play with a mark of 12-10.  They finished 18-10…and Division III champions! 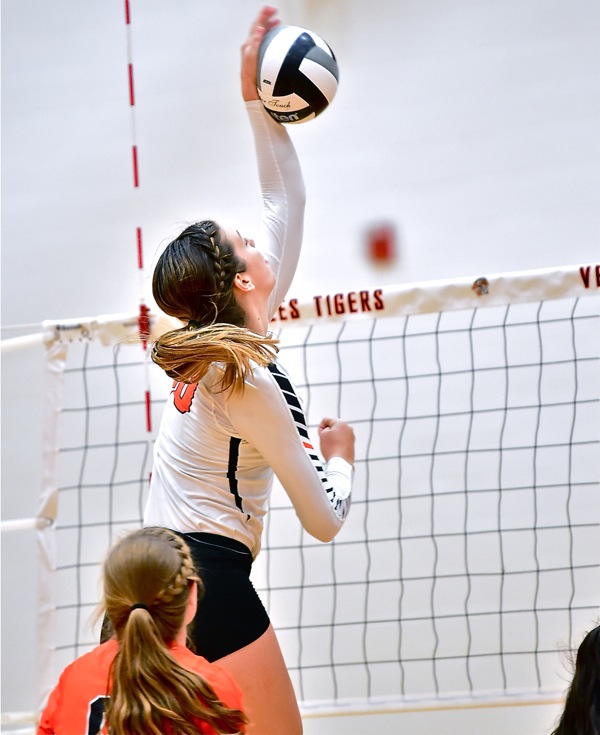