A Few Thoughts On Marty’s Retirement…The Cherry On Top, And No Sundae Left

Unlike a lot of you who’ll pucker up at the thought of Marty Brennaman retiring, I’ll choose to remember and appreciate him in a different way.  Let me share.

It will be the end of an era tomorrow, when Marty Brennaman calls his last game as the Reds’ play-by-play man.  Simply, he’s the best still working in the game.  Tom Hamilton is good (Cleveland), but he’s never had what Marty had.

I frankly don’t know what WLW is going to do for PSA’s for the next four months (public service announcements), because all they’ve done for the past four is tell us how many days are left before Marty leaves the booth.  I know they’ve done it out of respect, but you can only beat a good horse so long.  Among the things that Brennaman’s tired of, that commercial may head the list.

If you’re a baseball purist like me you dread the day when voices, like players, leave the game for the last time.  In the case of announcers, I still listen to old tapes of Waite Hoyt doing Reds games in the 60s.  I have some Ernie Harwell clips (Tigers).  And YouTube is full of Vin Scully, if you care to reminisce about the Dodgers. 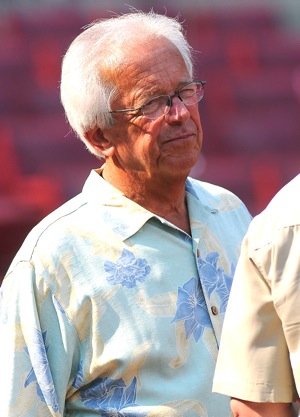 And for that reason I won’t miss Marty like a lot of you say you’ll miss him.  Technology being what it is today, I’ll simply go to the internet and listen to him all I want.  And I’ll fondly remember his work…because Marty told the truth about what he saw on the field.  If a player was dogging it, he said so.  If a player didn’t have the talent to play in the major leagues, he said so.  And that’s one reason why I won’t miss Marty on a day-to-day basis…because I’m tired of him telling the same old story about the Reds.  They’re just not relevant anymore.

They’re going to be a losing baseball team again this year, although they won’t finish last in the Central Division…but only because there’s a team in Pittsburgh that’s equally irrelevant.  And people ask why?  Why are the Reds predestined to lose 90 games every year?  They’re 11 games under .500, and they’ve got a shot.  The only thing that might save them from 90 is finishing this weekend with Pittsburgh.

Why?  Well, I believe in large part it’s their constant reminding us that they’re a small-market team, not having enough money, and eventually that becomes a self-fulfilling prophecy.  And, they’ve turned off veteran fans because they’re expensive…and by continually trading away fan favorites.  Baseball may be a business, but Cincinnati is not your average major league fan base.  The people here are generational, they remember the great players of the past, and they like it when a Jay Bruce and Todd Frazier come along and establish themselves as the face of the team.  As it is now, they have no face of the team.  Votto IS a face, because he’s been there so long, but that face seldom looks happy.  And here’s an understatement:  Joey Votto is not a people person.

Small market?  The Cardinals, along with the Brewers, draw three times the number of people that Cincinnati does.

Small market?  The Reds used to draw that way…when they won.  I’m asking…why can’t the Castellini’s remember that example and copy it?  The chicken DOES come before the egg?

Back to Marty:  I’ll miss his personality because he was always honest, and he wasn’t afraid of offending anyone.  If you’re bad in the business of baseball, you have two choices.  I don’t have to say what they are, do I?  But Marty did.

And the Reds are bad.  Not that they have bad players, but they just play bad baseball.  I’m tired of all the strikeouts – home run or bust.  I’m tired of them not executing bunts against the shift, or to sacrifice.  And how about the hit and run?  I’m tired of them pinching pennies on starting pitching, and wearing out the bullpen before the 4th of July.  I’m tired of David Bell doing double switches in the sixth inning and burning his bench.  Geezus…everything’s so tired!

Frankly, Marty Brennaman deserved better these past five years – a few more “This one belongs to the Reds.”  And that’s how I’ll remember him, along with Joe…because they’d never hire another Joe Nuxhall in this day.  Joe would have done it for nothing, and that’s what the Reds always look for first.  But you have to pay people now, and when you’re ‘small market’ you tend to do everything small.

Marty, if you read this…you were simply the cherry on top for the past 46 years.  It was a sweet ride.  And best of everything to you.

Sadly, you leave no ‘sundae’ behind.