They scored 31 points, but gave up 35.  After two previous wins against similar teams, and two narrow escapes, a bigger team and a dominant run game spelled defeat for the Flyers in their home opening against Duquesne.

Dayton, OH – It finally happened.  After flirting with disaster in their opening wins over Indiana State and Robert Morris – teams with more size and questionably more talent – the Dayton Flyers ran into a juggernaut Saturday in the person of the Duquesne Dukes…bigger, determined, and with a duo of running backs that Dayton simply could not tackle.

The Flyers lost in their home opener, 35-31, in a game where quarterback Jack Cook threw for 219 yards and three touchdowns – and the offense hung up 343 yards.  On a normal day…enough for the versatile Flyers to find a way to win.

But alas, on this opening day the Duquesne Dukes came to town without their best offensive threat, running back A.J. Hines, and still put 236 yards rushing on the boards (423 total), almost 5 yards per rush, and made tackling the likes of backups Mark Allen and Lentivone Lesane a study in abject frustration.  Allen carried the football 30 times for 169 yards (and two touchdowns), and Lesane chipped in 9 carries for another 51 yards.  Between them they averaged 5.5 yards per carry.

“We knew,”  said Flyers coach Rick Chamberlin.  “I told the guys this week they’ve got a lot of firepower.  They had athletes on both sides of the ball and we knew we’d have to play a clean game – no missed assignments on defense, no missed tackles on defense, no penalties, and no dropped passes and turnovers.  We had those at crucial times today and it cost us a ballgame.”

Actually, there wasn’t much defense from either team. 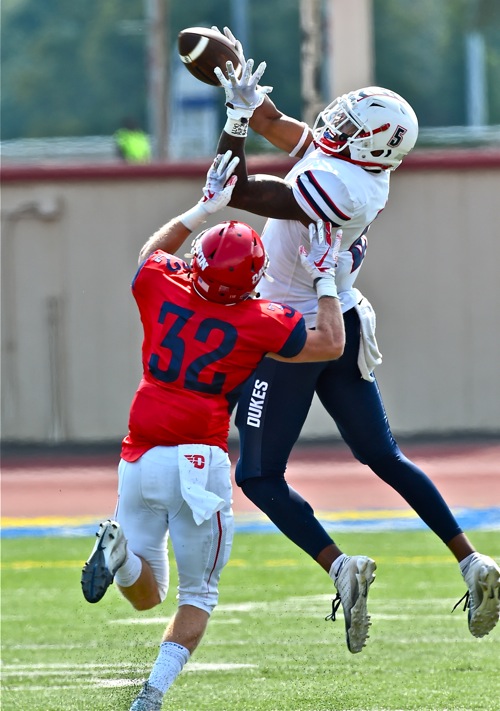 They ran the ball, yes, but the Dukes made enough plays in the passing game, too – Kellen Taylor makes this play over Dayton’s Sam Broom.

Duquesne took the opening kick and drove it down the field in eleven plays to score and take a 7-0 lead.

Jack Cook answered, driving the Flyers 74 yards in ten plays on the next possession and hitting Jake Chisholm for a ten-yard TD pass to tie the game at 7-7.

Duquesne came right back, Mark Allen running roughshod through the line and secondary, to score on a 1-yard run at 1:08 of the first period and retake the lead, 14-7.

You get the idea, don’t you?

Dayton and Cook came right back at 12:30 of the second quarter to score on a 35-yard pass to Kyle Butz, tying the game again, at 14-14.  And seven minutes later, Dayton scored again on a 15-yard pass from Cook to Adam Trautman to take a 21-14 lead.

It was dizzying – up and down the field – as Duquesne came back at 1:11 of the second quarter to again tie the game, 21-21, on a Daniel Parr touchdown pass to Kareem Coles…and that’s how they went to the halftime locker room.

Typically you find a way during halftime to regroup, reassess, and redirect your efforts against the likes of a running back like Mark Allen.  But not this time, and not this day for Dayton.

However, receiving the second half kickoff, Dayton’s Jake Chisholm provided a highlight of his own.  Gathering in the kick at his own three yard line, Chisholm got a block at the 20 yard line, broke a couple of tackles, and somehow found his way to the sideline.  He got a step on a couple of Duquesne tacklers…and set sail down the field, 97 yards for the go-ahead touchdown, 28-21. 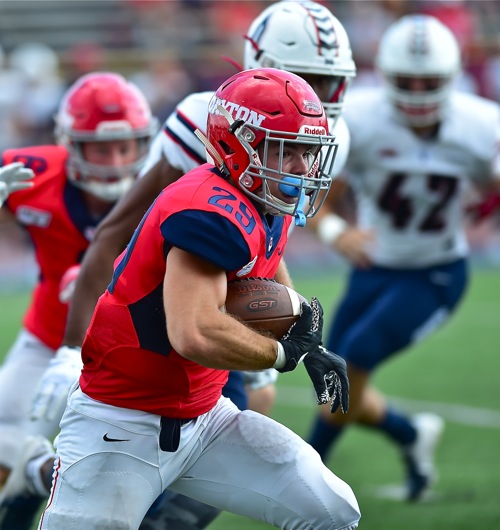 They made some adjustments at halftime to set up a kick return…and Jake Chisholm ran the second half kickoff back 97 yards for a touchdown.

“We made some adjustments at halftime, had a great return set up, and I made an early read on it,”  said Chisholm, a sophomore from Union, Kentucky.  “Kyle Butz made a great block on the backside and that sprung me.  I outran everybody to the end zone.”

But Chisholm and the Flyers could not outrun Duquesne’s persistent attack…and Mark Allen.  And not to say they didn’t have a chance.

Duquesne and Allen came right back to score on their first possession of the second half, quarterback Daniel Parr running in from three yards after Allen had run for gains of 8, 4, 17, 8, and 7 yards in an eight-play drive.  That tied the game at 28-28.

Dayton came back again, with Jack Cook moving the ball down the field to the Duquesne 13, where on second down he tried to hit a wide-open Ryan Skibinski in the end zone.  But he overthrew Skibinski and the ball was caught, instead, by defensive back Reid Harrison-Ducros, who was lying flat of his back in the end zone.

This time Dayton actually stalled the Duquesne attack, and Allen, at the UD 49 yard line, and on fourth and 27 (following a grounding penalty) Cole Kaparos blocked the first and only punt of the game, UD recovering the ball deep in Duquesne territory.  But they couldn’t punch it in this time, settling for a 32-yard field goal from freshman Sam Webster, and took a 31-28 lead in the opening moments of the fourth quarter.

Again, you want to believe that momentum, and emotion would take over – that the defense would be fueled by a late lead, and the heat and humidity would sap the resolve of Mark Allen.  Guess again!

On the ensuing drive Allen carried the ball for eight of the ten plays in a 75-yard drive, scoring from a yard out to give the Dukes a 35-31 lead with 4:14 left in the game.  And that’s how it ended. 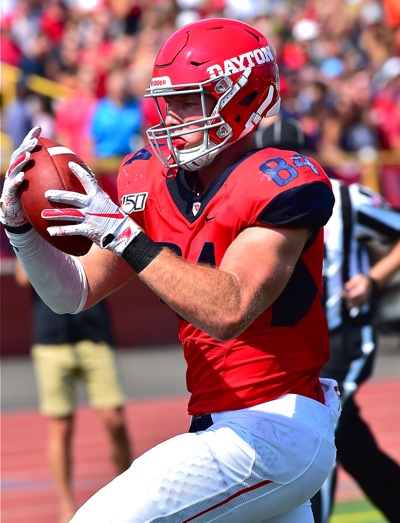 Dayton had one final drive, but on fourth and four from the Duquesne 30 yard line, Jack Cook’s pass attempt to Adam Trautman was broken up, Duquesne took over on downs, ran out the clock, and opening day ended in a 35-31 loss, and abject frustration for the Flyers.

There were good things, nonetheless.  Defensive back Adam Easterling had an incredible 19 tackles (9 solo) in a losing effort.

And Adam Trautman, whose profile as a collegiate tight end and draft prospect ascends with each passing game, caught nine passes for 89 yards to tie Bill Franks’ mark for all-time catches.

But individual marks were secondary to the fact of losing on a day where 31 points should have won – where the small things that Rick Chamberlin spoke of came back to haunt…and missed tackles at the head of the list.

“They ran hard all day,”  said junior safety Brandon Easterling.  “and Coach told us before the game that A.J. Hines wasn’t going to play, but their second and third running backs were just as good as Hines.  We tried to get it together at halftime, but we were just too up and down for the game.  We’ll learn from this and do a better job next week at doing our job, tackling.”

Big at the point of attack, like Indiana State and Robert Morris, Duquesne was able to parlay their size and strength into 236 yards rushing. 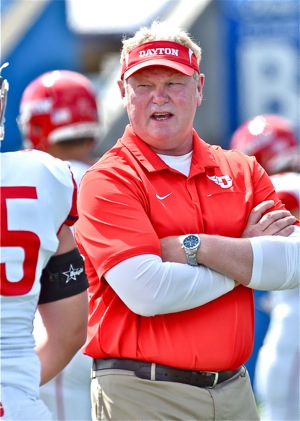 “Given the competition, I’m pleased to be 2-1.  But we’ve got a lot of things to clean up before we get into conference play.” – Rick Chamberlin

“That’s three weeks in a row where we’ve played teams that were bigger than us,”  said Chamberlin.  “And there were a couple of times when I thought we got manhandled [today], but there were other times when we just weren’t in the right spot.  That’s why there were gaping holes there (for Allen to run through).  Our guys were not where they were supposed to be.  You give a team like that a crack and they’re going to take it…and their best running back, Hines, didn’t even play.”

The Flyers complete their non-conference schedule with a mark of 2-1, and now face PFL foe Jacksonville, at home, on October 5 after a week off next week.

“Given the competition we’ve played I’m pleased to be 2-1, given that our two wins were on the road,”  added Chamberlin.  “But we’ve got a lot of things to clean up before we get into conference play…if we want to win the conference this year.”

And it wouldn’t be a bad idea to put a picture of Mark Allen in their lockers, a reminder that regardless of how big the opponent is, football is still about blocking and tackling.  2-1 is fine, but you knew that Rick Chamberlin was thinking about all those yards and missed tackles when he left Welcome Stadium Saturday. 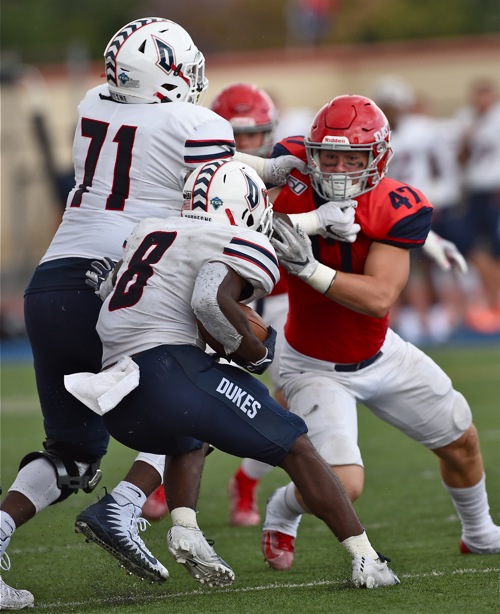 Duquesne running back Mark Allen (#8) finished the day with 30 carries for 169 yards and two touchdowns. 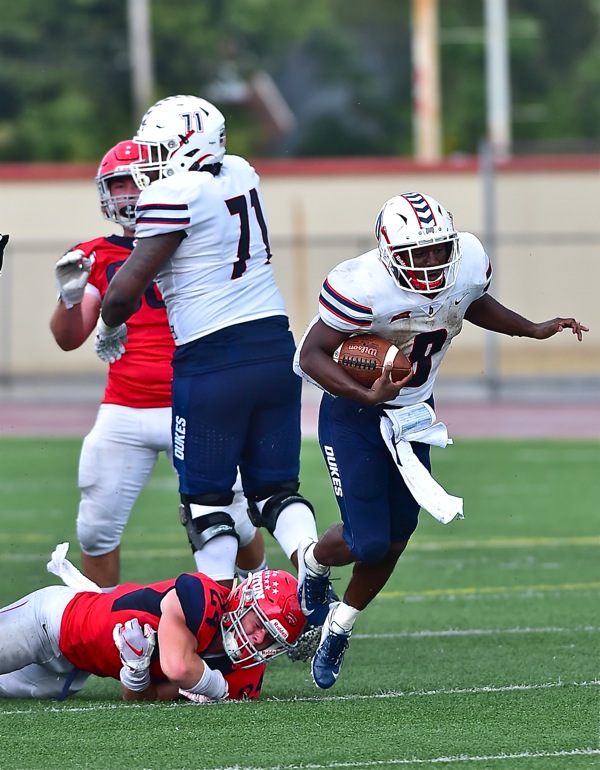 Duquesne's size on the offensive line was an obstacle, and running back Mark Allen running through the tackle attempt of Dayton's Brandon Easterling was a day-long frustration for the Flyers. (Press Pros Feature Photos by Sonny Fulks)