Hoard: Reds, Bengals Stand on A Dangerous Brink, But Do You Even Care?

Given the history of both in the past twenty seasons, can you actually remember the last time that either the Reds or the Bengals were something you anticipated, or even talked about?

CINCINNATI—He was probably somewhere in his early 70s, retired for sure and now doing a little part-time work at a nearby hardware store.

My Stihl blower—every bit of 25 years old—needed a little tune-up before the leaves started falling and the hardware store was the first on my fall to-do list. The Stihl had been and remained a wondrous piece of equipment and that led our conversation to how things just weren’t constructed as well as they once were. To the youngish bystanders who milled about—hovered for a millennial moment—we were two old fogeys moaning about the good old days: Get off the grass and gimme a beer.

“You know,” the attendant said, his name was Tom, “I got this radio. I’ve had it for more than 20 years, maybe 30. I’m not real sure. Anyway, thing pulls in channels clear as a bell. From all over. All I’ve ever had to do is change the batteries in the damn thing.”

I nodded my understanding and a shared longing for good, dependable things.

“I bought that radio for one damned reason,” he said. “I bought it so I could listen to the Reds’ games when I was out fishing on the lake.

“Used to love that: push off, drop a line and listen to the game, Marty and Joe. Didn’t matter if I caught a fish or not, it was just peaceful—relaxing, know what I mean?

“Listened to the Bengals, too. Being out on the lake in the fall—hard to beat.”

He sighed then. It was one of those sighs that came from down deep, where feelings and thoughts are pure.

“Course,” he said, smiling just a bit, “it’s different now. Not much reason to listen, is there? They ain’t much count. Neither one of ‘em.”

Again, I nodded, wondering all the while just how long it had been since a game in Cincinnati had truly mattered, be it Reds or Bengals, and for the life of me, I couldn’t remember. Was it when the Bengals self-destructed with 18 seconds to play against the Steelers in the playoffs? Was it when the Reds took two from San Francisco in the playoffs and then lost three in row at home?

Well, I said, trying to offer something of a hopeful note, maybe things will be different with the Bengals this season—got a new coach and all.

“Finally,” Tom declared, easing the Stihl back on a workbench. “How long you give a guy? Damndest thing I’ve ever seen. Marvin Lewis get another job? You have to wonder.

“And I ain’t buying this new start thing, new coach or no. I’ve heard all that stuff before. Same thing with the Reds. 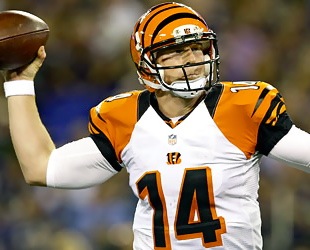 “Gonna be different.  Gonna change things up.  Then when things go bad like they always do, here they come saying…”something’s go to change. Somebody’s got to go.”

“Gonna be different. Goin’ to change things up. Talk. Talk. Talk. And all those Jaybirds on radio and TV, they lap it all up. Spout and preach and when things go bad like they always do, and you know they are going to, here they come right back, saying: ‘Somethin’s got to change. Somebody’s got to go.’

“Well, that’s what we got right here when it comes to those two outfits: insanity. Tell me another place where folks would put up with this. Tax money for those two big stadiums down there on the river and what do we get, nuthin’. It’s putting money down a sink hole, worse—down a toilet.”

But I got no farther because Tom, the repairman, had more on his chest, and he was not deterred in the least by the customers who idled by taking a look here and there at the gloves on sale or the special on the wire netting you put over your gutters. (Most didn’t look like they had gutters in the first place, or had ever cleaned one.)

“The thing is,” he jumped right in, “is we’ve reached the danger point. That’s what I call it. We was talking about it at the bar the other night.

“We’ve got to the point where nobody cares any more, I mean really cares. People don’t talk about the Reds any more, not like they used to. Remember? 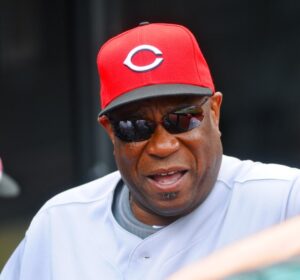 When was the last time the Reds played a relevant game?  Was it when they took two from the Giants and then lost three in a row?

“Used to, everybody talked about the Reds. All the time. Everybody knew where they stood in the league and how they were doing. People might not have gone to many games, but by-damn they listened to the games. Watched on TV. Had a radio on somewhere in the house, and always in the car.

“It was a part of life around these parts. Hell, I got family down ‘round Bowling Green, Kentucky—Warren County—they were big Reds fans. No more.

“See, that’s what’s become of things. Folks are past caring. It’s like they aren’t even around anymore. I can remember when the Reds were playing you didn’t dare drive down town on Second or Third street cause of the traffic. I saw a game the other day on TV, hell you could have put bowling alleys in the aisles and not bothered a soul. My folks down in Warren County—Cardinal fans now. Nobody cares about these yahoos. No body.

“As for the Bengals. Okay, new coach—I don’t even know his name—he’s got to do a whole helluva lot of winning before anybody believes anything is different with that damned crowd.”

“Oh, yeah,” Tom said. “What the hell. I don’t care what his name is or what his politics are, he’s got a long row to hoe before anybody believes in them boys.

“Hell, I pull for the Steelers just to (tick)-off my neighbors, and like a lot of folks, I’m curious to see how the Browns are gonna do, but I ain’t really buy-in’ that either.”

“You got a good point, Tom,” I said. “The Reds and Bengals have become dangerously close to being totally irrelevant.

“When you get to that point, when nobody gives a damn how you do, not even thinking about you, well, you are on the brink of real problems, and the only problems owners truly recognize are financial problems. 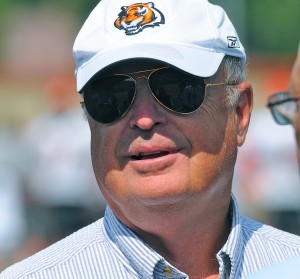 The man with the plan. Owner Mike Brown begs the obvious question. Would things have been different under his dad, Paul Brown?

“When the coffers start to suffer, they start to squeal and it always sounds the same, ‘We may have to move this franchise.’

“That’s the way it goes. Of course, the Reds will never do that. Baseball wouldn’t hear of it. The oldest professional franchise talking about pulling up stakes. Naw, wouldn’t fly.

“So,” I said with a deep sigh of my own, “looks like we are stuck with ‘em and their inability to build a winner. As for the Bengals—“

“What about me?” I said, still tickled over a fifteen dollar repair.

“You gonna watch the Bengals?”

I had to think about it for a minute.

“Truthfully, “ I said, “not if I can find something better to do, and it might not take much—a Gunsmoke marathon, maybe.” 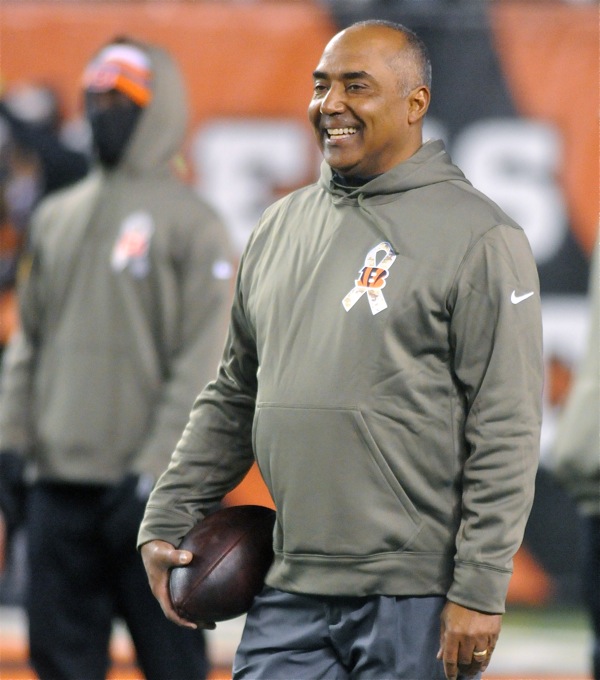 "Can you remember the last relevant game the Bengals played? And will Marvin Lewis get another job?" (Press Pros File Photos)