The man who shared the scenes of the Miami River and the Eldean Bridge with the world is still painting, and remembers fondly his time spent a quarter century ago in Troy.

Minneapolis – At 89 wildlife artist Dave Maass is hardly slowing down, even though, with a smile, he’ll share with you that he has, indeed, cut his pace.

The man who painted Troy, Ohio’s Eldean Bridge for the city’s Presentation Weekend celebration back in 1999 is still painting, still interested in hunting and waterfowl, his work, and his reputation is as popular as ever.

“I have a lot of good memories of Troy,”  he shared recently when I visited him at his home outside Minneapolis. “So many good memories of the people I met there – Ferdie and Edie Murphy, Bill and Wanda Lukens, Terry and Sandy Netzley, the Robinsons, and of course the mayor (Pete Jenkins).  I still have those Troy, Ohio, USA lapel pins he gave me somewhere.

“And I always think about coming to Troy to do the research on the piece, the two Presentation Weekend shows I did (in 1992 and ’99).  Those were good shows and good times.  I really enjoyed doing that painting (of the bridge).  That was a labor of love.”

He’s still painting, accepting commissions for his oils, for an appreciative audience of waterfowl and upland enthusiasts around the world that realize art, like the artist in this case, is ageless.  His works are among the most sought-after in the entire genre of wildlife and sporting art, owned and treasured by the toughest of critics.

But the large oil canvas of the Eldean River, of the wood ducks on the Miami River, is still one of his favorites.

It was commissioned as part of the Maass’s second feature artist appearance at Troy’s Presentation Weekend show back in 1999, and published by Wild Wings, in Lake City, Minnesota, as a limited edition print.  The first-ever nationally marketed image of a Miami County landscape, it found a popular and receptive audience.

The limited edition paper prints are now rare to find.  But the original oil hangs on display in the Miami County commissioners’ chambers at the courthouse, purchased at the time of the show by a group of area sponsors, who for posterity, wanted it preserved and shared with future generations. 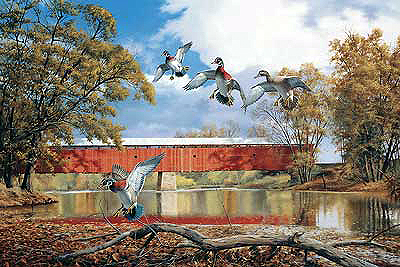 The Eldean Bridge, painted in 1998 by artist David Maass, for the 1999 Presentation Weekend art festival in downtown Troy, Ohio.

“I remember coming to Troy for the research photos of the bridge and getting people’s reactions about things that should appear in the painting,”  Maass says.  “Originally we couldn’t decide on what kind of waterfowl to put in the scene, but Ron English, at the gun store (Olde English Outfitters), said to put wood ducks in the painting because it was a species common to the river.  People seemed to really like the idea.”

And in fact, they liked it enough that he painted three other canvases on speculation, smaller oils that depicted other views of the river and the Eldean grain elevators that sat to the west of the river.  They all sold!

The show itself was a roaring success for downtown Troy, saluting Maass’s 30 years with Wild Wings and attracting other notable Minnesotans like Minnesota Twins’ hall of famer Harmon Killebrew, who flew in to pay his own tribute.

Now, twenty years later, he still asks about many of the people who helped make the Eldean project a reality…sad to hear that some are now gone.

The prints of the bridge can be found in numerous homes and offices around the county, but a good number were also sold to people across the country who liked the peaceful scene of the river, the bridge, and Maass’s signature ability to paint waterfowl.

“I’d really like to come back sometime and see that painting, but I’m running out of time,”  he laughs.

He can, of course.  It will always hang where people can come and see it, as timeless as the river, the bridge, and seemingly, the artist himself.

25 years after coming to Troy to paint the landscape of the river and the Eldean Bridge, Dave Maass remembers the community, the painting...and the people.