Beware Of ‘Dogs … Milton Bites Down On Northwestern

A diverse offense and hard-hitting defense has Bulldogs off to their first 3-0 start since 2007 following Friday’s 27-21 victory over Shane Carter’s Northwestern Warriors.

When it comes to the Milton-Union High School football team, it’s tough to get bigger than “Big Wes” Martin. The town favorite – all 6-foot-3 and 315 pounds of him – now plays for the NFL’s Washington Redskins.

But this year’s group of Bulldogs are starting to make a name for themselves, too. As senior running back AJ Lovin was talking to the media, a young fan ran up yelling “AJ! AJ!” With a triple-headed rushing attack and a potent passing game, Bulldog Nation is indeed … well … Lovin it!

On Friday night, Milton-Union outlasted a spirited Springfield Northwestern team that is looking to build it’s own tradition. Prior to 2012 the Warriors had one winning season over the past four decades. They’ve had three since, including last season’s first-ever playoff appearance.

Milton-Union broke Friday’s pre-game huddle by shouting ‘Swagger!” They ended the game with a confidence-boosting dagger – senior running back Kayge Thwait’s game-clinching, fourth-down carry to run out the clock on the Bulldogs’ hard-fought 27-21 victory.

“I got one goal for that (carry) and that was secure the game,” Thwaits said.

“It’s not all me. It’s my offensive line, for sure. They’re out there fighting for us. It’s a team.”

Northwestern’s Ben VanNoord bolted up the middle for a 24-yard touchdown with 7:59 left in the fourth quarter. Milton then methodically moved downfield with a 14-play, 54-yard drive to use up the final 7:53. Milton took a knee on Northwestern’s nine-yard line to improve to 3-0 for the first time since 2007.

“The senior class has heart and leadership,” Thwaits said. “We’re not going to give up. At the beginning of the year we said what’s our goal? Be relentless. It showed tonight.” 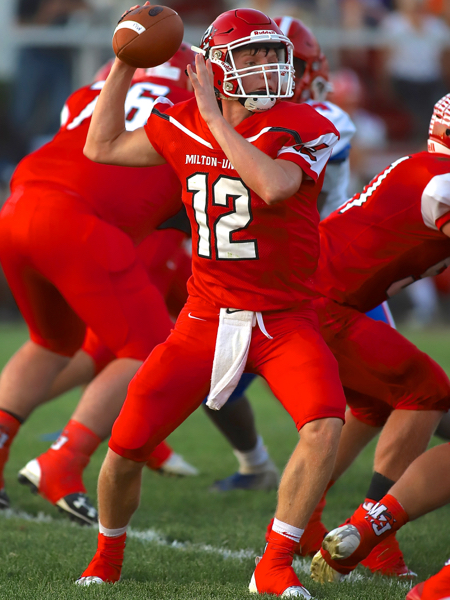 Quarterback Nathan Brumbaugh directs the offense for the Milton Bulldogs.

Milton-Union trailed 14-6 with 4:20 left before halftime. They rallied to take the lead with two touchdowns. Senior quarterback Nathan Brumbaugh scored on a sneak with 1:14 left and ran in the two-point conversion to make it 14-14.

After holding Northwestern (2-1) to a 3-and-out punt, Lovin did what he does best.

Lovin atoned for an earlier miscue – he fumbled a punt inside the Bulldogs’ 10-yard line that led to a Warriors’ TD – with an electrifying 83-yard punt return as time expired for halftime. With Warriors’ closing fast, Lovin caught the punt on a bounce at the 17-yard line. He took a hit at the 20, stayed on his feet and took a few steps up the Northwestern sideline. He bounced off another hit as he cut across the field, sprinted down the Bulldogs’ sideline and dropped into the end zone out of breath.

“Defensively we just have to tackle better. We let No. 9 break away from us,” Northwestern coach and former Troy High School standout Shane Carter said. “I don’t know how many touchdowns he had tonight but he had enough to win.”

The score was Lovin’s 10th offensive touchdown this season. He’s also scored on an interception and now a punt return. Five of his touchdowns have been 44 yards or longer.

“He’s 150 pounds on the roster but I thought he was tough,” Carter said. “He made some guys miss. We couldn’t tackle him so he’s good enough to beat us.”

Lovin helped put Milton up 6-0 with a 44-yard pass from Brumbaugh to end the first quarter.

Stats-wise Lovin was held in check. He finished with nine carries for 47 yards and caught one pass for 44 yards. He entered Friday night with 14 carries for 288 yards (20.6 yards per carry) and five catches for 97 yards (19.4 yards per catch). Score-wise, the Warriors’ struggled to slow Lovin down.

“That (offensive) line is insane,” Lovin said of senior teammates Ethan Tinnerman and Billy Grieshop and juniors Tim Artz, Mason Gooslin and Cody Ruby. “They work so hard. I make sure I hug them after every play. Every good run is all them. It’s not all me.

“The seniors are coming out with more heart than I’ve seen in a long time, not since my freshman year. We’re going to surprise a lot of people.” 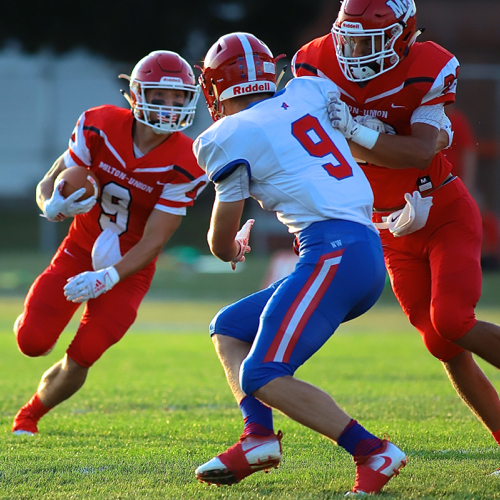 AJ Lovin (#9) cuts behind a blocking teammate for yardage in Friday’s win over Northwestern.

“We’ve got hard-nosed kids and if you ignore them, they’re going to lower their shoulder and pick up yards,” Milton coach Bret Pearce said. “We saw that tonight. We were a pretty diverse offense tonight and that’s what put points on the board for us. That’s the goal. Hopefully teams that see us on film are going to have a lot of things to prepare for.”

Brumbaugh completed 7-of-10 passes for 147 yards and two touchdowns. He hooked up with freshman brother Blake for a 30-yard strike with 2:07 left in the third to put Milton up 27-14.

Milton-Union finished with 306 yards of offense to Northwestern’s 296. Not bad considering the Warriors held a sizable advantage in the trenches.

“They might be outsized but we got them in heart,” Thwaits said.

Said Pearce: “I’m so proud of my offensive and defensive lines. We were giving up 50-60 pounds a kid across the line. I think we played as hard as them and I think we won the battle on the line. That was the difference in the game.”

Northwestern had it’s chances, too. The Warriors’ first drive ended with a tipped pass that senior Peyton Brown intercepted. He later ended a Warriors’ drive with an interception on Milton’s own 36-yard line.

Northwestern’s second drive stalled when Carter was given a sideline warning after questioning a call and a Warriors’ player then was flagged for unsportsmanlike conduct for jumping across the line of scrimmage and getting in a Milton’s player’s face. Once that was settled, the Warriors’ then had a 75-yard touchdown pass called back on an illegal block.

The Warriors were also stopped on fourth-and-5 from Milton’s 30-yard line to start the fourth after a sack from Thwaits on second down and Lambert’s tackle at the line of scrimmage on fourth.

“Everybody is doing their job. You can’t key on one of us,” Lovin said. “We have so many assets we can go to. … And our defense is on a whole ‘nother level right now.