Behind the level-headed mindset of senior quarterback Jacob Niemeyer (above) and the downhill running of senior Alex Schmitmeyer, the Minster Wildcats were able to capture a big road win over an inspired Covington team on Friday.

But in the end it was Minster’s big-game experience that was the difference as the Wildcats were able to take advantage of uncharacteristic “mental” miscues by the Buccaneers in critical situations.

“This team more than any other team I’ve had here needs to have the ability to respond,” said Minster coach Geron Stokes in regards to mental toughness. “That’s a big emphasis for us. How we respond to things is the pilar of this program.”

In all, Covington turned the ball over three times via fumbles and had a player freelance with an ill-advised fake punt from the Buccaneers’ own nine on a fourth-and-four situation – mistakes that either killed potential scoring drives for the Buccs or gave Minster excellent field position.

“Turnovers and mental mistakes get you beat,” Covington coach Tyler Cates said. “We made way too many mental mistakes against a really good team, but as many mistakes as we made we proved we can play with anyone.”

Early on it appeared as though the game was going to be a defensive struggle as neither team could mount much offense in the opening frame. Minster did manage to turn field position in its favor late in the open period and capitalized on a one-yard scoring plunge by Alex Schmitmeyer for a 7-0 lead. 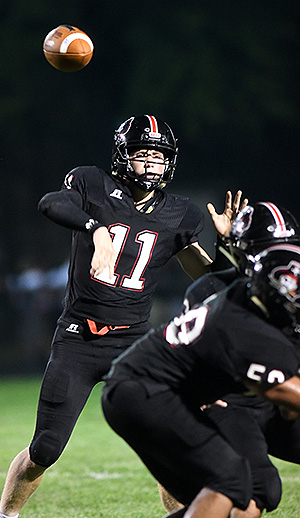 Covington responded quickly on the ensuing possession by running the ball right at the Wildcat defense with the legs of Trentin Alexander, Brayden Wiggins and quarterback Cade Schmelzer. The drive was capped with a 19-yard run by Schemlzer to cut the deficit to 7-6 as the point-after attempt landed wide left.

Minster, who opened up the game by primarily putting the ball in the air with senior quarterback Jacob Niemeyer, went to the ground game on its next possession. The Wildcats found success as Alex Schmitmeyer picked up chunks of yardage against the Buccaneer defense. The drive was capped by another one-yard run by Schmitmeyer to put the ‘Cats up 14-6 with 8:39 left in the half.

Covington’s drive stalled on its next possession and a short eight-yard punt gave the Wildcats the ball near midfield.

Fortunately the Buccaneer defense was able to hold and the offense came alive to reclaim the momentum.

Sparked by a huge gain on a pass from Schmelzer to Andrew Cates down the Buccaneer sideline and a 15-yard penalty on a late hit to tack on more yardage, Covington found itself in scoring position in Minster territory. A few plays later Schmelzer connected with Cates again in the right corner of the end zone from 23 yards out to cut the deficit to 14-13 at the break.

“We didn’t play well in the first half,” Stokes said. “We were like zombies out there and that’s on me because I didn’t have these kids ready to play.”

The Buccaneers received the opening kickoff to start the second half and put together what appeared to be an impressive drive – despite starting at their own nine due to a penalty on the kickoff.

Behind timely, pin-point passes by Schmelzer and a key fourth down run on a quarterback keeper, the Buccaneers found themselves perched at the Minster 30 with a first-and-ten. Unfortunately, on the very next play a Buccaneer receiver made a critical mistake by attempting to turn the play back inside after catching a pass. He was blindsides by a Wildcats defender, which forced a fumble that Minster recovered.

Fortunately the Buccaneer defense was able to come up with a big play of its own as Minster put the ball on the ground for its only fumble of the game and Kadin Presser scooped up the loose pigskin and raced 50 yards for the score and a 19-14 Covington lead. 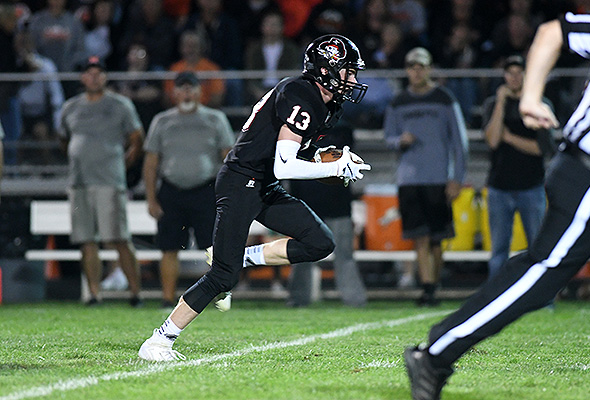 Covington’s Kadin Presser scoops up a third quarter fumble and races 50 yards for a touchdown and a 19-14 Covington lead.

But Minster, who is experienced in big games, responded with a 27-yard scoring strike from a calm, collected Niemeyer to Trent Roetgerman on the ensuing possession to put the Wildcats on top 21-19 with 3:53 left in the half.

“He has all of the potential in the world,” Stokes said of Niemeyer, who was lit up on the fumble Covington returned for the touchdown, but never lost his composure. “Hopefully his calm demeanor can help his level of play develop to another level.”

This is when the wheels came off for Covington, as once again a penalty on the ensuing kickoff negated a nice return by Dalton Weer into Minster territory. This time it was a clipping penalty that surrendered over 50 yards of field position, the Buccs starting the possession at their own six.

After a first down run by Trentin Alexander and a nifty completion from Schmelzer to Kadin Presser, the Buccaneers turned the ball over via fumble near midfield. 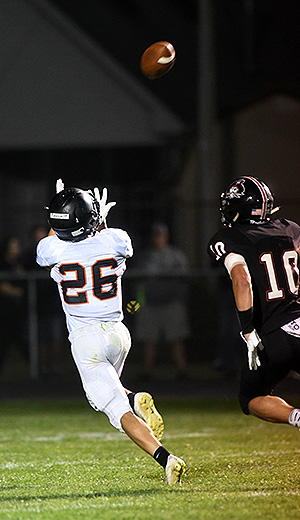 Four plays later the Wildcats capitalized on a 41-yard scoring strike from Niemeyer to Brendan Barhorst to push the margin to 28-19 with 2:12 left in the third quarter.

Things went from bad to worse for Covington on its next possession as the Buccaneers lined up in punt formation facing a fourth-and-four at its own nine. Shockingly, a Buccaneer player ad-libbed, attempting to trick Minster with a pass attempt that fell harmlessly to the recently recrowned Smith Field turf – a decision that drew the ire of Covington coach Tyler Cates.

“That’s senior who has to know the situation,” Cates said. “Not smart.”

But somehow the Buccaneer defense was able to keep Minster out of the end zone on four straight plays as the quarter came to a close.

“I’m proud of the effort and toughness, but disappointed with the mistakes and the end result,” Cates said. “We’ll learn from this and get better.”

Still, Covington was backed up deep in its own territory and was forced to punt the ball away after gaining some field position on a first down run by Trenton Alexander.

And the special teams unit that was stellar last week in an impressive win over St. Henry crumbled in the clutch as the punt went only 18 yards to give the Wildcats excellent field position on the Covington side of the field.

Minster was able to cash in once again on a Covington miscue with a 2-yard run by Schmitmeyer, who ended the contest with 162 yards on 36 bruising carries.

“Alex runs hard, but we have to get him running correctly,” Stokes said of Schmitmeyer. “We’ll continue to work on those things in practice.”

Trailing 35-19 with 9:30 left in the game, Covington showed its competitive toughness by putting together its most impressive drive of the game when it looked as though the outcome had slipped away. Despite a dropped pass that would have went for over forty yards, quarterback Cade Schmelzer connected on critical passes with Dalton Weer, Andrew Cates and Kadin Presser to move the ball into Minster territory. Schmelzer capped the effort with a 25-yard strike to Cates in the back of the end zone to cut the margin to 35-25 with 7:23 left in the game as the two-point conversion attempt bounced out of the hands of a Buccaneer receiver.

“The boys never gave up,” Cates said. “We just made more mistakes than them and we can’t do that against good teams.”

That would be the last time Covington would possess the ball as Minster put the ball in the hands of  Alex Schmitmeyer. The senior standout churned out tough yard after tough yard on carry after carry and eventually had the Wildcats perched inside the Buccaneer five with a first-and-goal. Minster then took a knee as time expired.

“We have a lot of work to do,” summarized Stokes. “We’re not playing to our potential right now, so we have a ways to go.”

“We have a good football team and we’ll learn from this,” Cates said. “This was a hard fought game to the finish, but you can’t win against a good team making the mistakes we made tonight. This result won’t define our season.”

Overall, the contest proved Minster is as good as advertised, and Covington is a team capable of taking the next step as a program…IF it can shore up its mental mistakes. 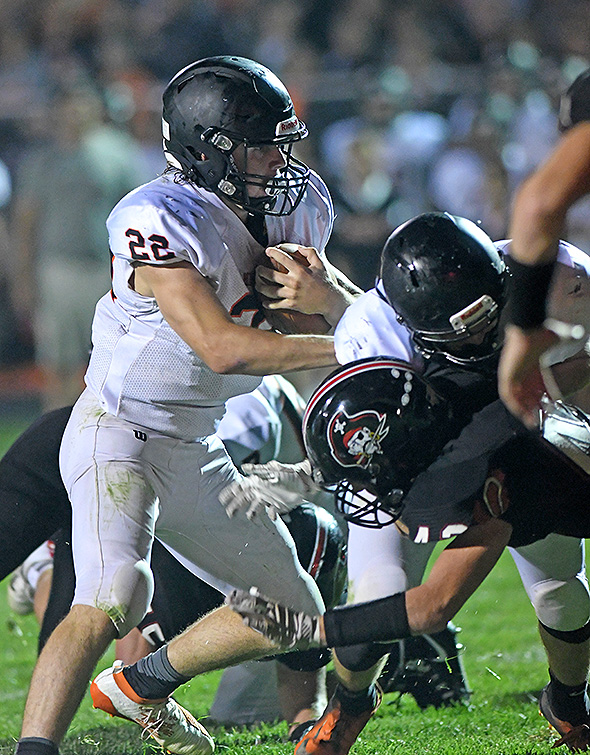 Alex Schmitmeyer rushed for 162 yards on 36 carries and scored 3 touchdowns in a 35-25 win over Covington. 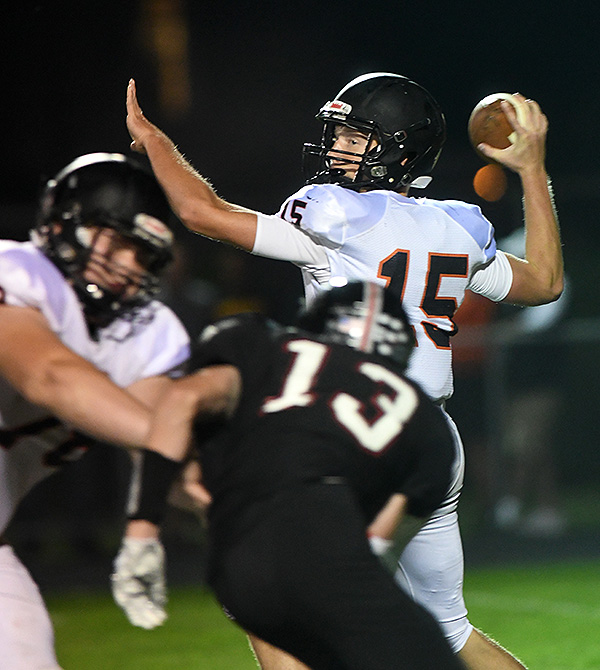