What We Learned From Week 1….

With one week in the high school football season in the books, what we know now that we didn’t know before.  And can you count on what we think we know…next week?

Here’s what we know now about area football that we didn’t know a week ago.

One, from what I personally observed from Minster in their opening win over Fort Loramie…the pre-season murmuring about them being a threat to win the MAC is legit, if not premature.  I’m sure that Coldwater and Anna will have something to say about it.

I also know that Fort Loramie is very, very good…even while losing to Minster on Friday night, 20-14.  More about them in a moment.

And from what I observed from the box score of Anna’s win over Bishop Fenwick…our prediction in last Friday’s ‘Picks’ column was more than justified.  We said they’d win by two scores against Fenwick and they must have laughed at that as they won, 48-14.

We missed completely with our pick of St. Henry over Covington – St. Henry’s youth and inexperience prompting one who did see the game to say it was just messy, “like a toddler eating birthday cake”,  a simile I’d never heard before.  But what Covington showed was the ability to go on the road and win a football game against a tough opponent.  And file that, because they’ve got Loramie on the road on September 20th.

No one particularly questioned our pick of West Milton winning over Miami East, and while Milton and a running back named A.J. Lovin was particularly impressive (Loving scoring six touchdowns), it may have said more about the state of football, overall, than about one team beating another.

There’s no question that Fort Recovery is legit, and frankly, against the meager roster that Lehman Catholic will field this year (23 players), it’s hard to say just how impressive the Indians’ 35-0 win really was.  For sure, they took their foot off the gas in the second half. 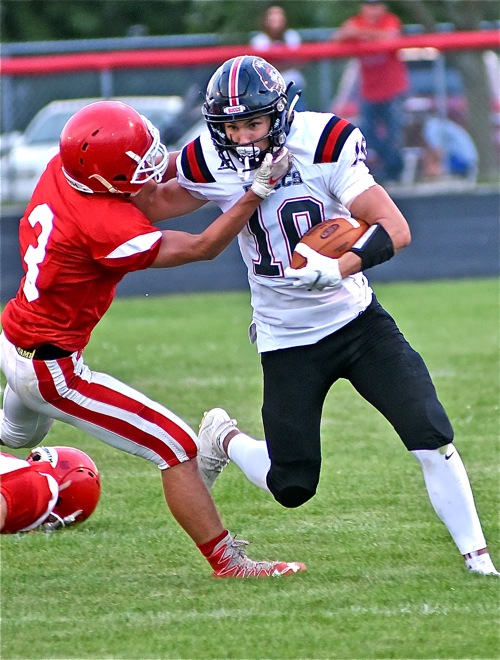 Covington’s ability to win a tough road game against St. Henry opened some eyes on Friday.

Tipp City losing to Mount Healthy was another miss on our Friday Night ‘Picks’, but it’s the way that they lost that shed light on what the Red Devils have ahead of them.  They led 8-0 at the half and then…’crickets’ for the second half, giving up 22 unanswered points to Mount Healthy.  “Mount Healthy was just better,”  said one who saw that game.

And Coldwater’s blowout win over Kenton simply told us that world order is still alive and well at the corner of routes 219 and 118.  Jake Hemmelgarn threw for 280 yards and four touchdowns and the Cavaliers had four different receivers with catches for 50 yards or more.  And oh yeah…they ran for 190 yards, too.  They spread it around, just like they always do;  and their kicker (Blake Dippold), who’s the best in the area, was perfect, too.

But more about Minster and Loramie…because I was there, and I took some notes.

The first thing about Minster is that while coach Geron Stokes is always prone to false modesty,  this is a football team that’s a compliment to him as coach. They play hard, they’re skilled, their interior line has size and always improves throughout the season…and their playbook is deep.  Add an experienced play-making quarterback, like senior Jacob Niemeyer, and they’ll really become an interesting team to watch when they play Coldwater in week 4, and Marion in week 8.

They play a lot like Stokes did when he was a quarterback at Urbana High School and Urbana University – hell for leather, and let it all hang out.  And you know, Stokes has never beaten Marion Local, and to a competitive personality like his that’s like waving a red flag in front of a bull.  Bottom line, if they stay healthy they’re going to play a lot of football in November.

As far as what I observed from Loramie…quarterback Collin Moore is version 4.0 of what we saw last year.  He’s stronger, more experienced, throws better, and tough to bring down when he runs;  and I’d say even with the backs that play behind him he’s their number one running threat. 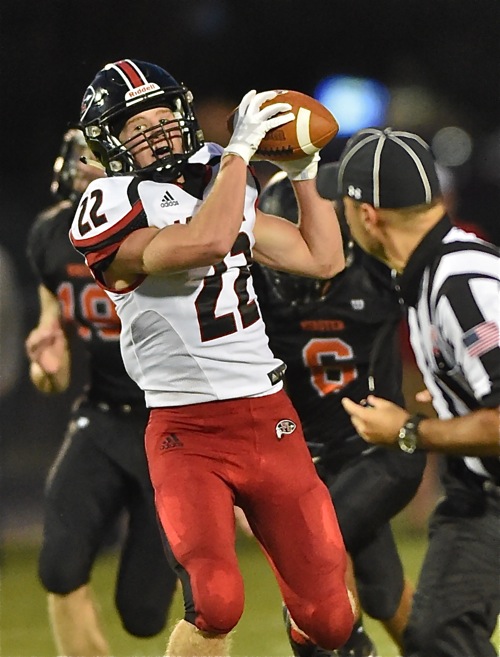 Loramie is solid, and their ability to throw downfield to people like Damon Mescher (above) is a Division VII nightmare.

Loramie’s line is big, talented, and they’re going to be a tough night for everyone in the Cross County Conference.  Geron Stokes went so far as to call them more talented than his own team.  Someone said over the summer that the reason the CCC broke up is because teams looked at Loramie and thought they were the ’85 Chicago Bears.  And who wants to play against something like that?

But what really impressed me about the Redskins was their similarity to Todd Schulte’s old teams at Delphos St. John.  Schulte always had quarterbacks that could run and distribute the ball through the air, and that’s what I saw on Friday.  Moore doesn’t just ‘hoist’ the ball to his receivers coming out of the backfield, he puts it out there with authority.  And when they take a shot downfield he has more than enough arm to find receivers like Damon Mescher and Brock Ruhenkamp.  You see, Spencer Wells played for Schulte at St. John, and like me, he must have taken some notes.

Loramie plays at St. Henry on Friday night and given their talent, the four turnovers they had against Minster, and the simple disappointment of losing to your backyard rival, no team will play in Week 2 with more motivation to improve than these Redskins (St. Henry are the Redskins, too). 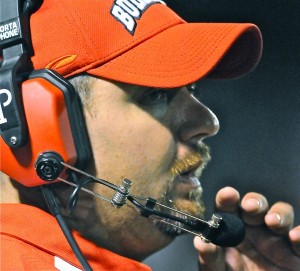 Brett Pearce made an impressive debut with Milton Union – 46-15 over Miami East.

Finally, what I saw on Friday was the evidence of some very good young coaches in our area.  I mentioned Spencer Wells and Geron Stokes, because I observed how much their kids trust, and how hard they play.  And soon you’ll be able to say that about Ryan Jones and Ty Cates, and add these four to the list of names like Tim Goodwin, Chip Otten, Bill Nees…and Bret Pearce at Milton Union, who’s making his second tour of duty as coach of the Bulldogs.  They were good when he was there before, and they’ll be good again…maybe before the end of the year.

This is what we learned, and to borrow from Stokes, the biggest improvement usually comes between weeks 1 and two.  Plenty of reason to go back and watch…come another Friday. 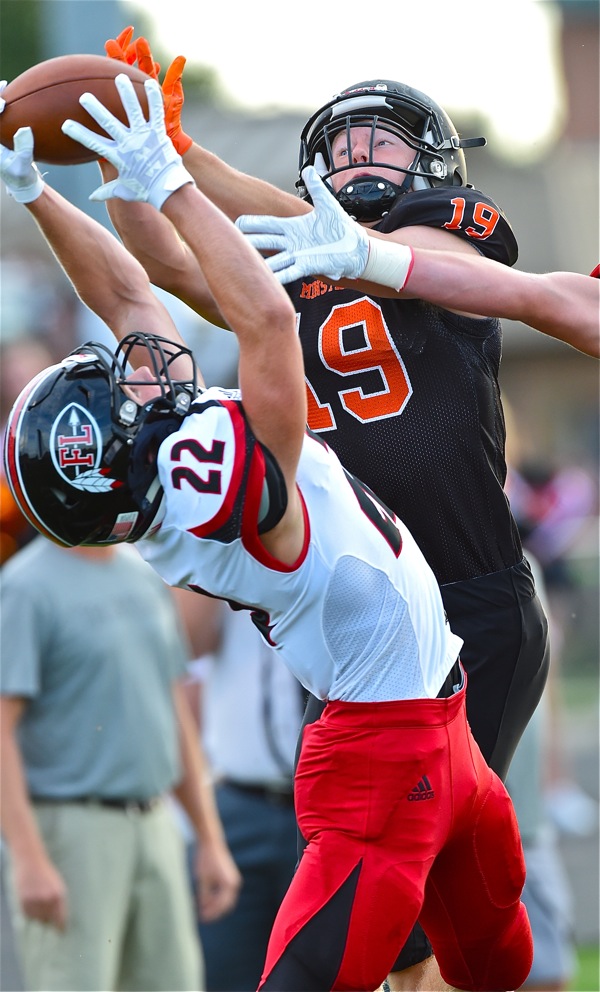 What we saw on Friday were teams with the ability to play at a high level...that will only improve with time, like Minster and Fort Lormamie (above). (Press Pros Feature Photos)