You Wonder About Marion? A Few Words From Tim Goodwin

They suffered massive graduation losses from last December’s state runner-up team.  They slip a division, back to D-VII.  Winners of six of the last eight state titles in Divisions VI or VII, people are writing, texting, and outright asking if Marion Local can throw enough together in 2019 to make another run.  And who better to say…than Tim Goodwin? 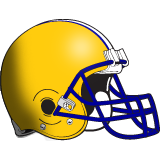 It’s been six years since we actually sat down with Tim Goodwin…back in the summer of 2013, in the midst of Marion Local’s four state titles, 2011 through 2014 – in the midst of the Flyers winning six titles in seven years!

There was a lot revealed in that story, pertaining to what was then (and it probably hasn’t changed) the hottest commodity in high school football coaches.  Goodwin would say…he was happy to be in the right school, the right community, and at the right time.  “I have everything here I need.  Why would I want to leave?”

And also in that discussion, the question of whether at that time…Marion Local was the top football program, regardless of division, in the state of Ohio?  After thinking about it for a moment Goodwin simply shrugged and said, “I guess we’d be in that discussion.” 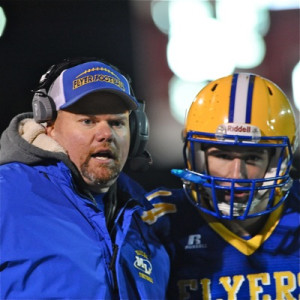 “I feel like we can play pretty good defense,” says Goodwin. “But we have to find out how we can score points against good people.”

They’re still in the discussion – they’re ALWAYS in the discussion – despite losing to Kirtland in last year’s Division VI title game, 16-7.  And if quarterback Nate Bruns doesn’t get hurt on the first offensive series of the game, they probably win that game.  Because, without a healthy Bruns they became one-dimensional, Kirtland’s defense tee’d off on the run game, and that was that.  Bruns graduated, receiver Nick Tangemon graduated, Nolan Habodasz, Matt Rethman, and Sam Huelsman graduated…and now it’s back to the drawing board.

Or is it?  And just what kind of drawing board do they have at Marion, winners of 10 titles in 20 years, and still knocking on the door of tying the most prestigious record in OHSAA football  – the record of 11 titles won by Cleveland St. Ignatius (Div. I) between 1988 and 2011?

For weeks, since the state basketball tournament, in fact, people have asked, people have emailed, and people have texted, “Can they regroup for another run in 2019”?

“Well, we graduated 18 of our 22 starters,”  Goodwin said matter-of-factly last week.  “That’s the most we’ve ever graduated in terms of ratio of starters.  Some of those spots I think we’ll be OK, but some of the others…I have no idea.”

It’s sounds a bit like starting over, but with the numbers typical at Marion starting over never means starting from scratch.  There are athletes, like sophomore defensive back Peyton Otte, who started and played significant minutes last year as a freshman. 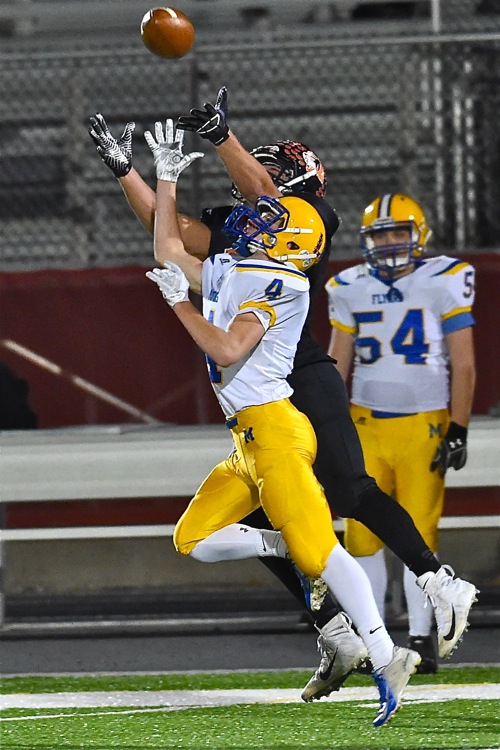 Marion’s Peyton Otte (#4) played extensively as a freshman.  “He may be the most electric player we have.”  –  Tim Goodwin

“He’s the most ‘electric’ guy we have,”  says Goodwin.  “Maybe he can do the things Matt Rethman did for us on offense.  But at this point we don’t know.  Charlie Huelsman (Sam Huelsman’s little brother) has looked good at receiver and he’s a long, lanky guy like Nick Tangeman, but he’s not a state qualifier in the high jump and long jump like Nick was.  We have twelve juniors and sixteen seniors, but fewer varsity-ready starters than we’ve had for years.”

There’ll be running backs – there always are at Marion Local.  And the two candidates to play quarterback are both seniors – but without significant varsity experience.

“I feel like we can play pretty good defense,”  continues Goodwin.  “But offensively…we’re going to have to find out how we can score points against good people.”

They’ve had so much success it would be natural to become annoyed at the assumptions:  that you never have to rebuild…and that you’re going to play post-season football regardless of who you have on the field.

Tim Goodwin doesn’t suffer foolish speculation, or the idea that he’s immune from the constant turnover that comes with high school football.  Talk of titles and records in July, of St. Ignatius, or putting the cart before the horse…and he rolls his eyes.

“Mostly people are being respectful when they ask, or when they talk about it,”  he says.  “And it’s nice that people care.  But it’s high school.  There’s ebbs and flows, and my only concern is that Marion Local fans cheer for and support our kids because they’re going to do their best.  Now how good that best is going to be?  I don’t know.  It may be less than the last ten years, or it may be close.  I just don’t know at this point.”

Tim Goodwin is a math teacher.  He enjoys the challenge to teaching challenging material;  and teaching adolescent athletes to play against Coldwater, and St. Henry, Ft. Recovery and Anna is about as challenging as it gets.  He’ll tell you it’s a process, and if you don’t enjoy the process you’re not going to be around very long.   Still, he has no issue with the prospect of failure.  Tim Goodwin and Marion have gone 5-5 before…and still made it to the playoffs. 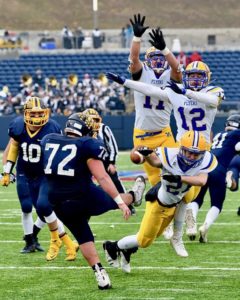 “The older you get the more likely it becomes some years to think about having to start over again from scratch,”  he admits.  “But, the coaches think the biggest question on our team will be the offensive line…and if that’s the case that gets me excited.  Because, that’s the group I get to coach.

There’s always some ‘Coach Speak’, even with Goodwin and the matter-of-fact world of Marion football.  He’ll tell you, “I have no idea” in one breath, then…

“There’s some spots where I have pretty good idea about who’ll step in and play, and it won’t be too bad.  We’ve had some pretty good football players, like Duane Leugers and Nate Bruns.  They all started someplace.”

And to the issue of Division VII?”

“It might give us a little boost just because it’s going to be tough sledding to win those top MAC games this year.  If we win the games we have a shot at winning we’ll make the playoffs.  And if we make the playoffs, with the schedule we’ll play, we’ve got as good a shot as anyone.”

And how’s that different from any other year, in case you’re wondering?  Remember, they’ve gone 5-5 and made the playoffs before, and no one in Division VII wants to see that!

Regardless of record, Marion’s always in the discussion. 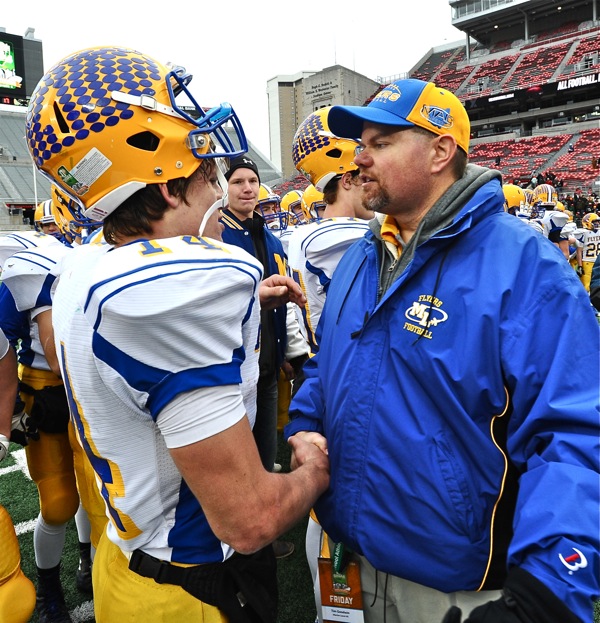 They lost 18 of their 22 starters from last year's state runner-up team. "That's the most we've ever graduated in terms of ratio of starters," says Marion Local's Tim Goodwin. (Press Pros Feature Photos)