Nick Marino…And The Year Of The Rocket (?)

There are high expectations for the Anna football Rockets in 2019, but you’d never know it from head coach Nick Marino’s expression.  Tough sport, tough league, and tough people…”We haven’t done nothing, yet,”  he says.  That’s his story, and he’s sticking to it.

Anna, OH – If you’ve never tried…it’s tough to get the Anna Rockets’ Nick Marino to smile.  Not that he won’t, and not that he’s an unpleasant guy – neither are true.  He’s very pleasant.

“Football coaches just don’t smile much,”  he said last week as we posed him for some up-to-date file photos.

But perhaps he should, at least for the next six weeks, as his Rockets are one of two teams being mentioned as favorites – that’s right, favorites – to win the outright football title in the MAC for 2019.  The MAC, where Marion Local and Coldwater have reigned supreme with ten state titles in 13 years…and before that, St. Henry, and Versailles, and Delphos St. John, and another sixteen titles!

But this year, or at least this summer, people talk about Anna, which shared the 2018 league title with Marion (both 7-1), with quarterback Bart Bixler back, and Riley Huelskamp…pound for pound the most dynamic player in the league for 2019, coming off a junior season where he gained 1,300 yards and scored 21 touchdowns.

They also talk about Minster, where coach Geron Stokes has his quarterback, running back, and feature receiver returning, along with a massive offensive line that now has a year’s experience from last year’s 8-4 record and playoff appearance.

But smile?  Forget about that.  Nick Marino is having none of it, deferring to that tried and true phrase that occupies the title line in the book of “Coach Speak”.

“We haven’t won a game yet, or even scrimmaged,”  said Marino last week, sober as a judge.

“We’ve got camp and two-a-days coming up and that’s where you see how your team is going to form.  You can talk about returning starters, but every year is totally different when you consider the leadership of your team. And we graduated our best leader last year with center Isaac Dodds, so if we find a leader that steps up and fills that role we can be successful this year.” 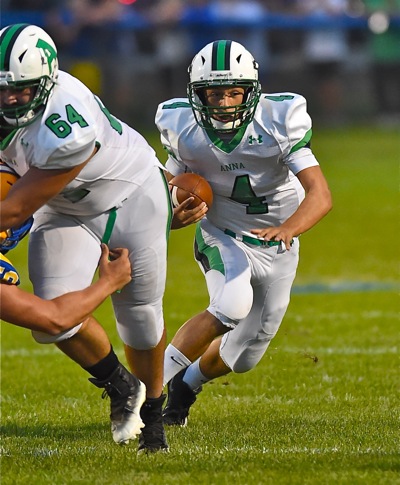 That’s ‘Coach Speak 3.0’, of course, because the Rockets do have the advantage of Bixler and Huelskamp starting out, one that at least eight of the ten teams in the league do no have.   And bringing that to his attention did finally bring a smile to Nick Marino.

“We do have two dynamic players in the offensive backfield,”  he admits.  “They’re both game-breakers and they can both make a big play at any time.  And yes, that’s a luxury to have this year.  But again, a lot can happen, and needs to happen in camp – between now and the first game of the season.”

Marino, like Minster’s Geron Stokes, graduated from Urbana High School.  He’s four years younger than Stokes, and followed him to Wittenberg University where he played his college football under coach Joe Fincham.  And after four years at the ‘Berg, ironically, he found himself back at Urbana, with Stokes, coaching the Hillclimbers.

“I don’t know, I was like 25, he was like 21, and we’re coaching high school football and had no idea what we were doing,”  says Stokes.

But they figured it out in a hurry.  After just four years at Urbana Stokes took the job at Minster, replacing Nate More in 2013.  One year later he won the Division VI state title with the Wildcats.

Again following in Stokes’ footsteps, Marino came to Anna five years ago (after two years as Urbana’s head coach) to replace Brian Rioch.  And in the four years since his arrival the Rockets have won 3, 5, 7 and 8 games.  So of course the speculation…can they break through finally to win an outright title this year, or get past the first round of the playoffs, where they fizzled in each of the last two seasons?  Something, it seems, always seems to happen to Anna.

“What happens,”  says Marino, “is we play in the MAC.  We’re leading Marion Local 20-0 in the first half of our game with them, and they come back to win 44-20.  It’s a tough league, with tough players and great coaches.  Coaches make adjustments during games and you have to counter.  But last year we lost our first game, then we lost to Marion in week 5, and won the rest of our games before losing our playoff game [with Elyria Catholic].

“Do I think we could have done better?  Yes, because you can always look at three or four plays in every game.  You flip those plays and you give yourself a chance to win and we have to make those plays consistently.  And part of winning is believing you can win.  Plus, we haven’t played that much football at Anna (four years in the Cross County Conference before joining the MAC in 2006).  I don’t know how many dads we have that even played high school football.  We’ve always been a basketball school. So it’s a confidence thing for the kids and this year I think we have seniors who have that confidence.

He will tell you that people always assume too much in the pre-season, especially in football – that it’s easy to believe you’re better than you are before you even play. 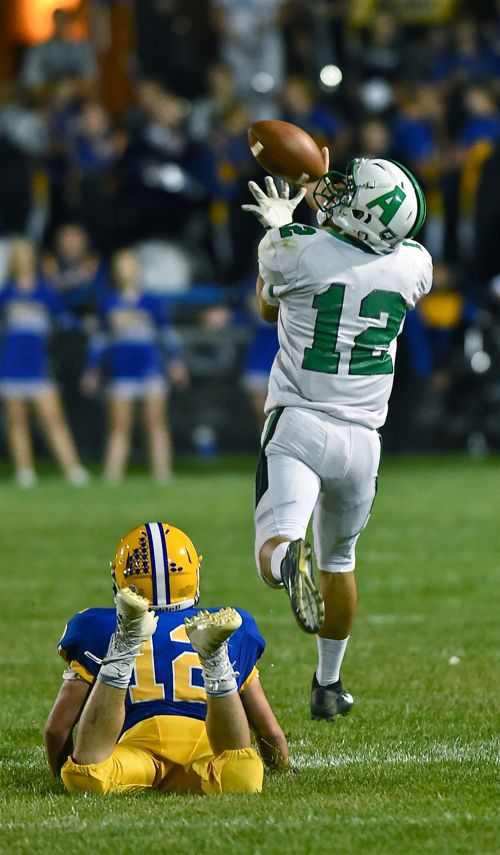 Burn ya’ deep – Anna’s Jeffrey Richards caught Marion Local flat-footed with this reception from Bart Bixler in their lone 2018 MAC…to the Flyers.

“You saw that last year with Alabama,”  says Marino.  “And all the time Nick Saban said they weren’t playing very well.  You have to improve with every single week.  Confidence is good, but I don’t want to be over-confident.  Over-confidence scares the crap out of me.”

He will hand you a roster sheet highlighted in yellow, for the players he believes fall into those important categories – quarterback, running back, skill positions, interior lines.  Once again the Rockets will have size and dress 55 to 57 kids.  They hope not to be one-and-done at any particular position.

“However,”  he smiles, stressing the importance of a Riley Huelskamp.  “We don’t have another one of him.  He’s a tough kid that has a lot of work ethic.  He comes from a farm family and he gets up at 4 am and takes care of his animals.  Everything he does is 100%.  And then he has those leadership abilities.  He’s the guy on our team that can call anyone out and challenge them.  He doesn’t wear down…he can carry the ball 30 times for you if you ask.  If it’s a tough game, he’ll ask for the ball even more.

“Bart Bixler’s just a great athlete.  I think you see that in basketball.  He’s a playmaker, and he’s not afraid to make a play (820 yards rushing last year and 750 yards passing).

“But where we really have to be good is tackle to tackle, and we graduated two of our best from last year, between Dodds and Brayden Farley.  We’ve looked good so far, but we have to develop that play in camp.  You’ve got to move people in our league, because in this league everybody’s big.” 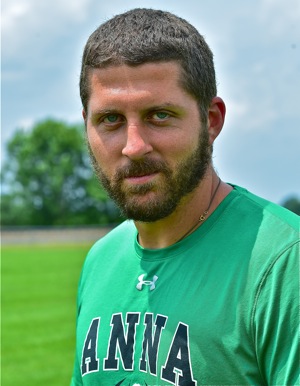 “Confidence is good, but I don’t want to be over-confident.”  – Nick Marino

And so are the expectations, as the region and the state watches to see if Marion Local can rebuild in time to play in Division VII for their eleventh state title.  Can Coldwater regroup behind senior quarterback Jake Hemmelgarn?  St. Henry is banking on its youth movement.  First-year coach Ryan Jones will be working overtime to bring Versailles back to prominence.  Chris Schmidt has New Bremen on an upward path.

“And Fort Recovery,”  adds Marino.  “They’re big, they’ve got a great playmaker at quarterback, and they’re tough.  You have to think about them.”

So while he has plenty of reason to smile, Nick Marino is quick to remind you that it’s July, they haven’t won a game, or even popped the pads in camp.

“Make us sound good, but don’t make us sound arrogant”  he cautioned as we parted.   He was serious…poker-faced, of course.

You never want to be over-confident.  Not in the MAC. 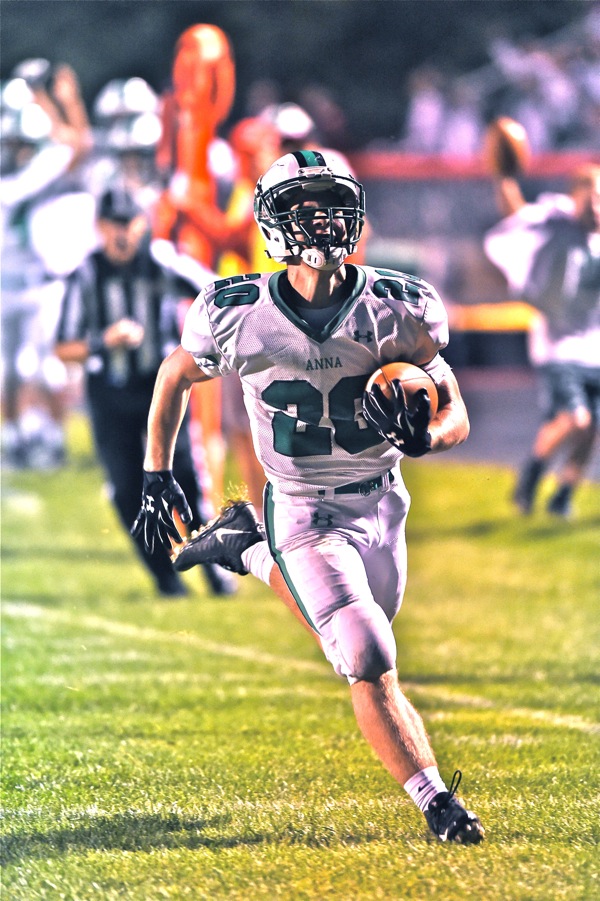 The most dynamic player in the MAC? Riley Huelskamp returns off 1,300 yards last year, 21 touchdowns, and the endurance to carry it as much as necessary. (Press Pros Feature Photos)