Sometimes It Takes An Undertaker…Cleaning Up Baseball History

At the suggestion of one Press Pros reader from out of the area, we got involved with a project that proves fame does not protect you from time and neglect.  And now baseball icon Branch Rickey (if he cared) can rest with pride. 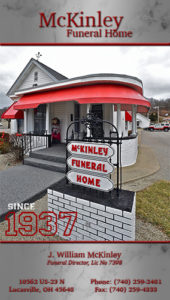 When we published the story last February about Branch Rickey, the hall of fame baseball executive who made baseball history by bringing Jackie Robinson to the Brooklyn Dodgers in 1947 – the first African-American to play in the major leagues – we showed some photos of Rickey’s grave in Lucasville, Ohio.

Rickey died in December of 1965, was buried in a small country cemetery (Rush Township Cemetery), and his grave is marked by a large white marble headstone.  Of course, in the 54 years since he died time and the elements had taken their toll on Mr. Rickey’s stone, turning it dark and discolored with algae and mold from the nearby fields.  Frankly, it was ugly, and sad that one of the most important men in baseball history could be forgotten and neglected in such a way.

Well, the internet is an amazing tool, and before long we began to hear from people who read the story from out of the area – a Dodger fan from Arizona, for one, and another from upstate New York, near Cooperstown, who asked, “Is there no one locally who might clean that stone?  It’s a disgrace to one who did so much for baseball history.”

For the record, we wrote back and shared that for the sum of $300 we could have someone power wash the monument and restore it to its original condition.  And it may surprise you to hear…that was the end of it.  We never heard from that person again.  So, with the help of Lucasville businessman William McKinley, whose family has owned and operated the McKinley Funeral Home for 80 years, Press Pros took the project upon itself. 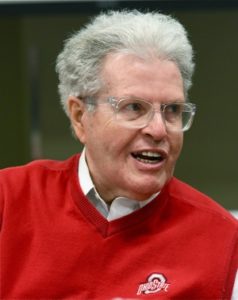 Lucasville businessman William McKinley got the ball rolling.  “Sometimes it takes an undertaker to get something done ‘above’ ground,”  he said.

“I know a guy here in the area,”  said McKinley back in April.  “I’ll get a quote and we’ll proceed from there.”

And in a matter of days he called me back with the estimate of $300 to clean and restore the white marble to showroom splendor.

This past week I stopped by his office in Lucasville.

We jumped in the car and within minutes were standing at the foot of Branch Rickey’s gravesite.  As you can see from the comparative photos, they did a fantastic job.

“I’ve showed this to what there is left of the Rickey family in the area,”  said McKinley.  “They’re thrilled with the way it looks now.”

We took some photos for posterity, and left, pleased to have added this small touch to one of baseball proudest accomplishments.

“I guess sometimes it takes an undertaker to get something done above the ground,”  laughed McKinley.

“Let’s see if anyone in New York, near Cooperstown, notices,”  I said as I paid him for the work.

Or sends a check. 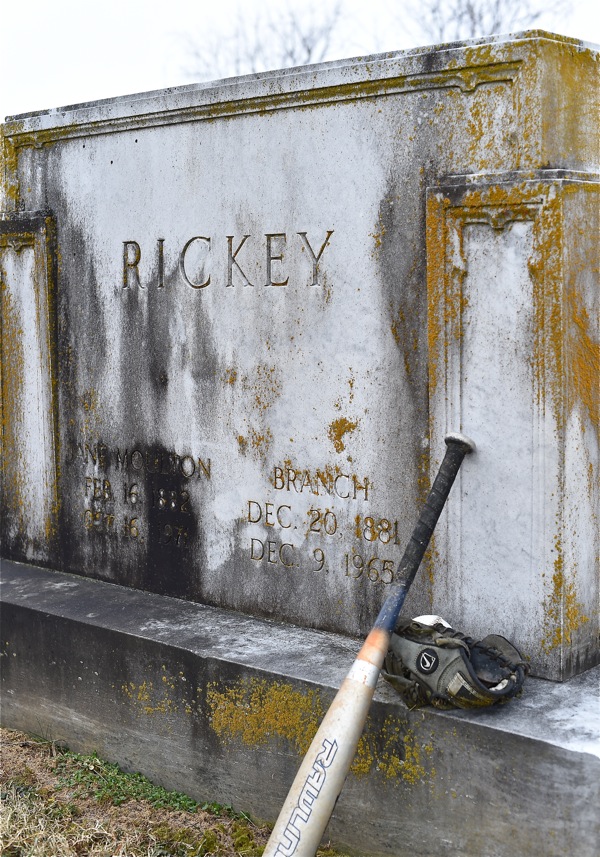 As it looked in February…Branch Rickey died on December 9, 1965 while making a speech in Columbia, Missouri. 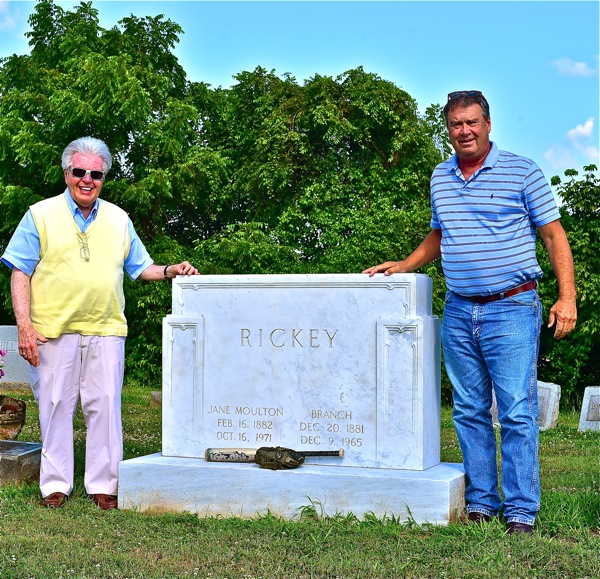 We got involved...cleaning up the monument to one of the most important men in baseball history (with Lucasville's William McKinley, above left). (Press Pros Feature Photos)