They Raised The Dead In Gettysburg….

I went to Gettysburg for a little peace and quiet…a little history.  No one told me it was ‘bikers’ week’, and no one will have to tell me again.

I had never been to Gettysburg, Pennsylvania during ‘Bikers’ Weekend’. And I won’t go again!

Over a thousand Harleys, Indians, and Goldwings (probably some other makes, too, but these were the loudest) descended upon the usually quiet, serene high water mark of American history over the weekend. Good for the bikers. Awful for the locals and those, like me, who just wanted to commune with the past.

More than a few who live there found reason to leave town for visits somewhere – anywhere else. Loud? Yes, and constant. I went to bed in my downtown hotel room Saturday night after the grand cycle parade through the main square earlier in the evening, expecting many of those bikes to leave town for home. Silly thought.

They were still revving the engines and roaring up and down Baltimore Street at 2 in the morning. Apparently city officials gave them a pass regarding any kind of noise ordinance, because they sure made a helluva lot of it!

“Good for business, though,” more than one local bartender admitted. ‘Bikers’ Week’ has been going on now for almost 20 years and it brings in an estimated half million dollars in additional commerce to a community that badly needs the boost.

Restaurants were full. Hotel rooms were renting for a premium. Local shops, especially the T-shirt shops were booming, and a bunch of enterprising Gettysburg High School students set up a ‘bike wash’ on York Street for $20 a bike. They did land office business.

By far…the biggest beneficiary of the weekend was the local Harley-Davidson dealership that literally sold out of every specialty complement you could think of. That, plus the service department was working overtime.

They were there from anywhere, and everywhere – north, south, east, and the Midwest. The crest of Little Round Top at one point had a hundred bikes crammed into parking spaces for maybe fifty cars and tour buses. Round Top hadn’t seen that much traffic since the afternoon of July 2, 1863. People were clambering over rocks, climbing trees, running through the poison ivy, and generally making more noise than the artillery battle that preceded Pickett’s Charge.

“It’s what I do,” said one rider from Staten Island, New York, in a heavy ‘New Yawker’ accent. “I’ve loved bikes for years.” And he looked the part – tattoos, leather, boots, do-rag – he had it all. 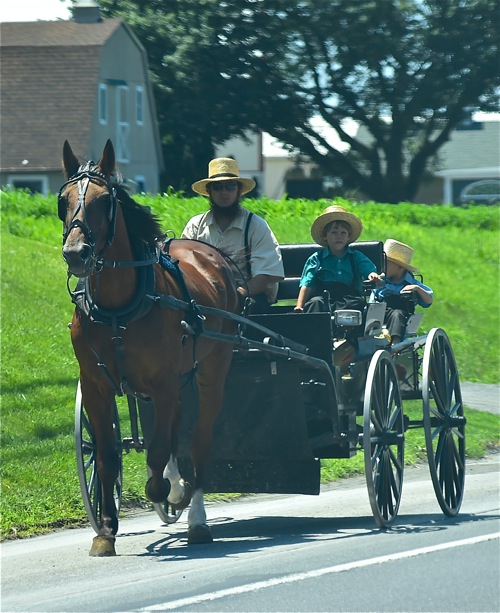 “I’m a firefighter during the week, but I’ve been coming to Gettysburg now for about ten years.”

“Haven’t made it there yet,” he answered. “But it’s on my list to do. I can get here on four hours. It would take four days to get out to South Dakota.”

There was a lot of Yuengling consumed (the local beer, made up the road in Pottsville), and there was plenty of exposure by all those Harley mamas in full flower. God knows what Lee and Meade would have thought of that. And they all made the most of every minute, roaring up and down Confederate Avenue, Baltimore Pike and the Emmitsburg Road – flags flying, mamas with their heads held high, hair blowing in the wind.

As for some peace and quiet…Bill Wells, Tom Randall and I drove east on Saturday, to Lancaster County, and pretended we were in a scene from Witness – looking for Harrison Ford and Kelly McGillis (as she looked in 1985).

And then…as soon as they came, they were gone. Sunday morning dawned bright, and calm, and quietly. There wasn’t a biker in sight, gone back to Staten Island, to Baltimore, Morgantown, Pittsburgh, Frederick, Toledo, and Virginia Beach. Lee’s retreat, itself, couldn’t have been more welcome, except for all the money they left behind. For another year life could go back to normal in Gettysburg.

On Monday the merchants would count their profits, while the locals would open their doors and windows again and count their blessings. ‘Biker Weekend’ comes but once a year in Gettysburg. And someone said…. 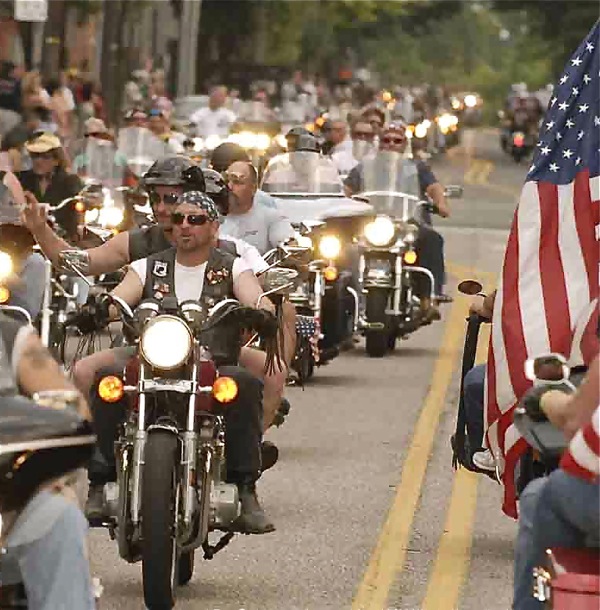