I wanted my own .22 so bad I could taste it.  But it took of summer of hard work and hard persuasion to make it happen…and my Uncle Mel coming to the rescue.

Ed. Note:  Tom Cappell is a veteran shooter, hunter and writer from Missouri whose views on the outdoors and the outdoors industry are thought-provoking and always responsible.  His columns have previously appeared on Press Pros, sponsored by Olde English Outfitters, in Tipp City.

Understand, you haven’t seen a lot when you’re just thirteen, but I was sure the first time I saw a Marlin lever action rifle that it was the neatest, niftiest thing you could own.  The trouble was, they were $79 dollars, and, there was no earthly way that my mom and dad were going to spring for $79 when there were two other siblings to buy birthday gifts for, in consecutive months, besides me.

“Besides,”  my mom had told me earlier that spring.  “I don’t think its a good idea for you to own a gun when you live in the city and have no place to shoot it.  When you go to Uncle Mel’s you can shoot one of his guns at the farm.”

All of that was true, of course, but I wanted a .22 of my own.  Since age ten I had been shooting his old Remington bolt action at tin cans and frogs in the creek.  And, I had practiced enough to become a pretty good shot, if I do say so.  No less than Uncle Mel himself, the best uncle in the world, had bragged on me to his friends at the hardware and feed store.

“You guys oughta’ see Tommy tear those tin cans to pieces,”  he’d laugh, slapping his leg.  “The way he shoots, Winchester’s working third shift just to keep him in shells.”

But Uncle Mel was only too glad to keep me supplied.  There was just him and my mom, his only sibling, and I was the only nephew in the family.  My two sisters had absolutely no interest in the outdoors, in guns, shooting, or even hearing about it.  And every summer, within days after school was out, Mom and Dad were happy to have me go stay with him on his farm, two hours down the interstate from our home in Columbia.  That…was summer vacation with action packed in every day.

So then, there was the matter or that day at the hardware store, and that Marlin Model 39 lever action.

“Would you like to see how it feels?”  the clerk asked me.  He might as well have asked if I wanted a hamburger with all the trimmings. 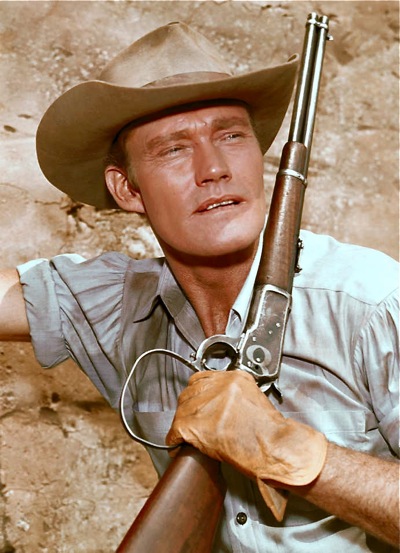 Chuck Connors didn’t shoot a Marlin in the TV show, but that didn’t matter to me.

He handed it to me across the counter and immediately I had this vision of my being like Chuck Connors, the actor that played The Rifleman in the old TV series.  It was beautiful – the wood, the metal, the fit, the finish.  It felt like an extension of my arms and shoulders when I pulled it up to sight down the barrel.  But still, it cost more than I had, and there was simply no way, or no argument, that was going to land it in my hands.  That Marlin was just a thing to dream about.

“Your mom’s pretty set against you having that gun,”  Uncle Mel said on the drive back to the farm.  “You know, you’re welcome to use the one at the farm.  But if you’re that set on it, maybe you need a job.  Maybe there’s a way.”

That was on Saturday, and on Sunday he called my house and talked to Mom.

“Sis, I’ve got a lot of fence work here and I could sure use Tommy’s help.  I know it’s his birthday in a few days, but would you have any problem with him staying with me a couple of weeks?  I’ll take care of the birthday, don’t you worry.”  Apparently she consented, because he hung up the phone with a big, broad smile.

“Tomorrow, Tommy, we’re going to start work on the fence on the twenty acre pasture.  And when we’re done we’re going to put a down payment on that Marlin.”

I thought he meant a trip to the hardware store.  But no, bright and early the next morning he handed me a post hole digger, an auger to make holes to set new fence posts eighteen inches deep in the ground.

It seemed easy enough when I started, digging down through that sandy bottom dirt.  But by the time I had dug three of those holes I had an entirely different view.  By lunch I had dug ten of them and could hardly hold a fork and spoon.  Still, I had to go back and find a better way.  Uncle Mel stepped in.  Rather than turning that auger with both arms, he attached a pitch fork handle to the auger and once the hole was started I could push the auger, walking in a circle, with more leverage.  It was easier, but it was still work.  By the end of that first day I didn’t even eat supper.  I went straight to bed.

I was so sore in the morning that I could barely get out of bed.  But when I came downstairs Uncle Mel smiled and said, “Come outside with me.”

Overnight, he had hooked up another, different auger to the back of his tractor.  “The trick is,” he said.  “You have to get the holes started straight – straight up and down.  I think we can get the hang of it.” 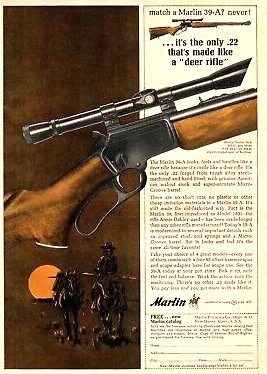 A Marlin ad for the 39A from a 60s edition of Outdoor Life Magazine.

How he came up with that auger attachment I don’t know, but by noon we not only had the hang of it, we had punched out 15 holes.  By supper, we had 35 done and he had posts set in the holes already.  By the end of the first week we had over half the job done.  By Friday of the second week we had dug exactly 400 holes, posts set, and fence ready to stretch.

“Sis,” he said over the phone that night.  “I need him for a couple of more days.  We have to go into town for some more supplies.  Almost done here.”

That next day he walked into the hardware store, wrote a check, and walked out with that new Marlin.

“This is your pay for helping me with that fence,”  he said, handing me the box.  “Happy birthday…and when we get to the farm we’ll see if it shoots as good as they say.”

I was never so proud of a purchase, before or since – I never worked harder for something, before or since.  And it did shoot good…picking tin cans off those fence posts we had just set along the creek bottom.  When I got ready for the trip home the next morning, he said, “We’ll leave your Marlin here in the gun cabinet.  That way it’ll be here when you’re here.  And come squirrel season in September…well, I’m sure you’re going to be here for opening day.”

We shook on it, and while I was disappointed that I couldn’t have it with me at home, I knew that nothing bad was going to happen to my new Marlin because I knew it was in good hands.   And Uncle Mel couldn’t have been happier over giving me something I wanted bad enough to work that hard for.  He knew…this birthday would be hard to top. 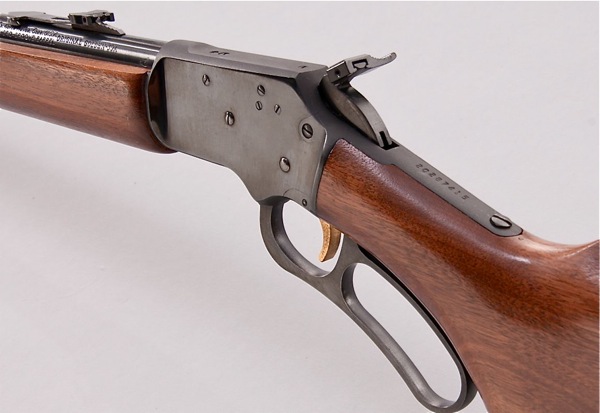 It was a thing of beauty, and still is. The Marlin 39A .22 had a reputation for being great to look at, and great to shoot. (Press Pros File Photos)