Two of the most outstanding examples of scholar-athletes you can find, Anna’s Griffin Doseck and Russia’s Jenna Cordonnier garnered end-of-the-year Press Pros honors and a sponsor’s scholarship for the Shelby County League.

Sidney – Shelby County League secretary Stan Evans probably says it best.  “When it comes to competition there’s no other league I know that can match the Shelby County League, and for the fact that every team in the league is in Shelby County.  And, they play each other twice – round robin.  That makes it really tough.”

And among the scholar-athletes from Houston, Fort Loramie, Russia, Fairlawn, Botkins, Jackson Center and Anna, Russia’s Jenna Cordonnier and Anna’s Griffin Doseck came away Thursday night with honors as 2018-19’s Press Pros scholar athletes of the year, as supported by the sponsors of Shelby County League sports on Press Pros.  For their efforts, Cordonnier and Doseck will both receive $2,000 scholarships to further their education this fall at Wright State and Capital University, respectively.

Cordonnier, a three sport athlete in volleyball, basketball, and softball, enjoyed a more than distinguished career in volleyball, particularly, where she attained league honors in each of her sophomore, junior and senior years…and set a school record for 2,000-plus assists in just three seasons, while playing on district championship teams in her sophomore and junior seasons.  For good measure…she was Russia’s valedictorian this past spring.

Headed for Wright State University in the fall, she’ll pursue a degree in marketing.

Doseck was equally impressive, leading the Anna Rockets to the Division III regional tournament in his senior year while attaining All-Region and 1st Team All-State recognition in Division III.  He’ll attend Capital University, in Columbus, this fall to study biology and play basketball for Coach Damon Goodwin and the Purple Crusaders.

“I want to thank my teachers and my coaches,”  said Doseck.  “And my teammates at Anna.  And thank you to those sponsors who made this scholarship possible.  This is very important to me.”

Added Cordonnier:  “Thanks to the sponsors, but I want to thank my parents and my family for pushing me to work hard and make good decisions.”

Cordonnier is the first Russia athlete to be honored by Press Pros, and follows Jackson Center’s Kennadie Reese, who won the award in 2018. 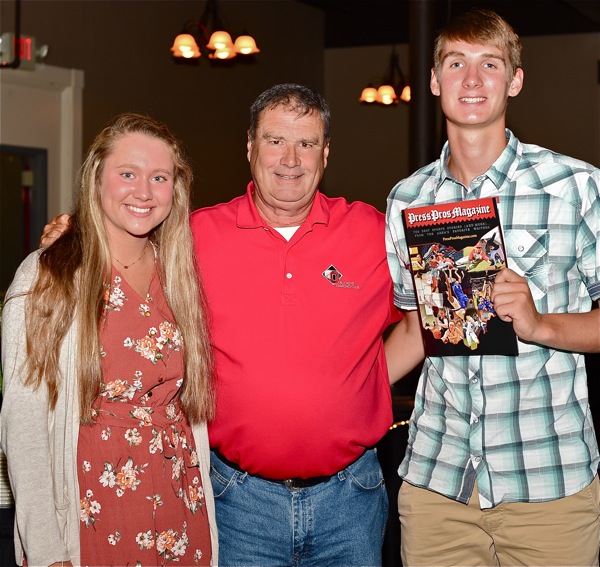