The latest questions from fans of baseball, and the latest answers from baseball hall of famer Hal McCoy, who doesn’t promise you’ll be happy with the answers – just willing to face the music if you’re not.

From Dave in Beavercreek, Miamisburg, and Centerville:  If I happen to see Joey Votto with his family enjoying dinner at a famous restaurant can I assume that his bodyguard is sitting at a table nearby?

DAVE: If he was sitting in a restaurant near Dayton, I am sure you and your lovely wife would be sitting close by taking selfies. Is there a restaurant in the Dayton area that you have not frequented at least twice? Those Golden Buckeye cards come in handy, don’t they? As for Votto, he is so quiet and reserved that he doesn’t need a bodyguard. I fear that the home plate umpires might soon need a bodyguard if they keep calling him out on strikes. If looks could kill, half the major league umpires would be six feet under. I thought I saw Votto the other day at Amber Rose. But when I blinked and cleared my eyes, it was you.

From Gene James: Hal, first time writer, but long time admirer of your columns. Recently found you on the Press Pros Magazine site with great surprise, and delighted. My question is… the Dodgers-Reds trade now looks like nothing more than a mutual dump of players that both clubs were tired of. Your opinion if you please.

GENE: So glad you found us and me. Welcome and thanks for the kind words. It is, indeed, a labor of love. When that Dodgers-Reds trade was made, that’s the first thing I thought. The Reds were dumping Homer Bailey and the Dodgers were dumping Yasiel Puig because they have a surplus of talented outfielders and were tired of his hot dog antics. Bailey, by the way, has won five games for the last place Kansas City Royals. How many Reds starting pitchers have won five games? And the answer is: Only Luis Castrillo with six. Tanner Roark has four. Sonny Gray and Anthony DeSclafani each have three and Tyler Mahle has two.  After a soft start, Puig has picked it up considerably lately, but he wouldn’t have had that chance in LA. He would have been, at best, a platoon player and more likely a bench player.

From James Harner: Long time Reds fan admitting that it gets harder by the day to even watch them. I’m wondering why if the starting pitching is that good, and the offense was among the best in the league last year, what’s still missing?

JAMES: They are, indeed, hard to watch most of the time. With the additions they made this year I thought they’d be a lot more exciting to watch. And some days they are, but they are so inconsistent it is frustrating to Reds fans, many of whom have said already that they are no longer paying much attention. Yes, the pitching is much better, but even it is inconsistent. The offense, on paper, looks as if it should be raking every day. Unfortunately, as all the analytics guys are discovering, the game is not played on paper or on a computer. Human beings still play the game and human beings are, well, human. Like Forrest Gump’s box of chocolates, you never know what you are going to get. I always hope I don’t get one with a cherry inside. 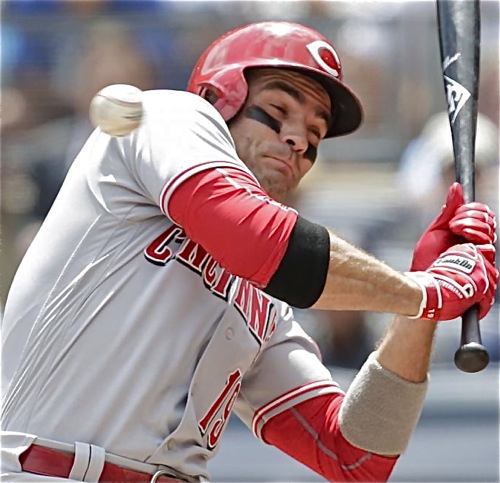 The rules have changed, but there seemed like there were less problems with knockdown pitches in the old days, when the players took matters into their own hands.

From Randy in Troy: At the rate things are going will David Bell become the next scapegoat and fail to see the end of his contract?

RANDY: The manager is always the scapegoat. You can’t fire an entire team. As one former manager said, “There are two kinds of managers — those who have been fired and those who are going to be fired.” The season isn’t yet half over, so talk of firing first-year manager David Bell is vastly premature. Yeah, I know. Tony Perez was fired after 44 games. But that was done by former general manager Jim Bowden, ol’ ‘leatherpants’. With his father, Buddy Bell, in the front office, there is a strong chance David Bell is on a longer leash than somebody else might be. I like a lot of things I see from David Bell. I just wish he would show more personality in his interviews and not talk in a quiet monotone. I hope he raises his voice with some of his players the way he does with umpires because right now he leads the majors in ejections this season.

From David Waller: Hal, can you explain to me why with so much emphasis on enforcement of pitchers throwing at hitters now there seems to be more of it than there was in the 60s when the players took things into their own hands?

DAVID: It’s because they’ve changed the rules. Back in the 60s they didn’t issue warnings if umpires thought pitchers threw intentionally at hitters. And they didn’t throw pitchers and managers out of games if the umpire believes the pitcher threw at a hitter after they were warned. It is a stupid rule. If a pitcher throws at a hitter or hits a batter and a warning is issued. the other team can’t retaliate. It would make more sense if the warning was given only to the pitcher who threw at the batter and not warn both sides. That would give the other team one shot at retaliation. Then they could warn that pitcher and his team. What’s fair is fair. Each side gets one shot. Wasn’t it more fun back in the day when Bob Gibson and Don Drysdale and Juan Marichal would throw at their own mothers if she dug in too deep at home plate or admired her home run too long? Gibson once stood glaring on the mound as a hitter dug a hole in the batter’s box to plant his back foot. Gibson told him, “Dig it deep, because I’m going to bury you in it.”

From Bill in Columbus: Why talk about Reds baseball? I wrote to you a couple of years back about cigars and you told me your favorite was the White Labels by Monte Cristo. Any new favorites since then?

BILL: Back in the days of The Big Red Machine we were permitted to smoke in the press box and it smelled like a tobacco humidor. I wish we still could so it would distract what we have to watch on the field — and I don’t just mean the Reds. It is so boring these days to watch home runs, walks and strikeouts and not much else. Monte Cristo White Label Churchills are still my favorites. But if you are a cigar smoker, fellow cigar smokers always give you what they smoke. And I reciprocate. So I guess my favorite is any cigar given to me free. Baseball writer Tom Haudricourt of the Milwaukee Journal and I always exchange cigars. The Reds played last game in old Milwaukee County Stadium and Haudricourt and I exchanged cigars at home plate, like managers exchanging lineup cards. And we had our picture snapped.

From Chris in New Albany, Ohio:  I often wonder if Reds management hangs around for the games to watch?  If they do, are they out of harm’s way from the fans?

CHRIS: When Bob Castellini first purchased the Reds he was highly visible, often popping into the clubhouse after games. The players don’t like front office folks hanging around their clubhouse and Castellini must have got read the memo. You hardly ever see him any more. He has a private box that he occupies during games. After some games, the media has to wait for the elevator because Mr. Castellini gets the first ride down. If the Reds are getting whomped, he sometimes leaves early and the elevator is there for us right after the game. The operator smiles and says, “Mr. Castellini left in the seventh inning” There are days I wish I could leave in the fifth inning. 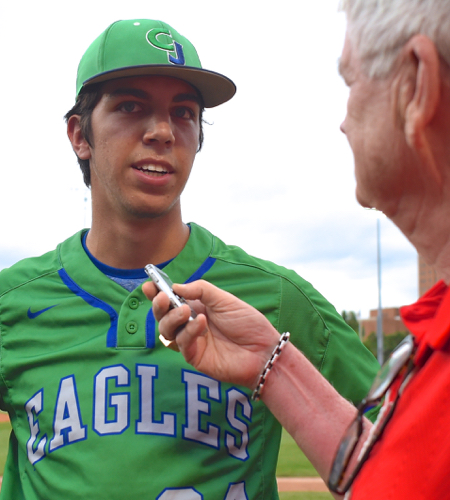 From Terry in Dayton:  Hal, someone pointed you out at the state baseball tournament and I wanted to stop to say hello, but couldn’t get your attention.  Can you share how you happened to be there, and what it was like compared to covering a Reds game?

TERRY: I wish you would have stopped me or caught up with me. I chatted with a lot of fans at Akron’s Canal Park during the state baseball tournament. I always enjoy chatting with fans. For the last three or four years, I have taken a break from covering the Reds to cover the state baseball tournament for Press Pros Magazine. It is one of the most enjoyable weekends of the season, a great getaway. The coaches and players are so happy to have the coverage and the attention and are genuinely happy to see me. The Reds? They could not care less and many of them wish we weren’t there. Many of them don’t even take the time to know your name. And it is so refreshing to watch kids play the game for the love of it. They all play hard and enjoy it. Sometimes the baseball isn’t so great and sometimes it is electric. One of the best baseball games I saw all year was Chaminade Julienne’s 1-0 state championship game win. It was a perfectly played game from start to finish.

From Gerry:  I’d like to have one of the throwback uniforms from the 60s or 70s when they wear them, and wondered how they are available for purchase?

GERRY: Most of those uniforms are very cool. I love most of them but I didn’t like the 1935 model they wore recently. The front was plain white with nothing on it, no wishbone-C and no ‘Cincinnati.’ Just plain Jane. The Reds could have been any team. The way they’ve played this year, though, maybe playing incognito is a good thing. I know the Reds sell those uniforms, or put them up for auction. The proceeds go to the Reds Community Fund, a great charity run by Charlie Frank. I’m not sure how fans can purchase them or bid on them. I’d suggest if you are at Great American Ball Park that you check in at the team gift shop and ask. I’d love to have one of those blue 1911 replicas.