Cappell: Thoughts On Hunting As I Knew It….

I’m at the stage of my life where I can truly look at hunting with a different perspective.  Have I done it the hard way all these years;  or, have I done it the right way?  I don’t expect you to agree with me, but my opinion…on how hunting has changed.

(Ed Note:  After a year off from active work due to heart surgery, contributing writer Tom Cappell returns to the pages of Press Pros with our sincerest appreciation.  He’s always been a great read, and has more to say now…than ever.  A Missourian was a unique perspective and respect for the outdoors, his columns are always represent an honest and thought-provoking view of our natural environment.)

I’m thankful to be writing this.  Because, while the past year has been one I appreciate for the fact of even being alive, I wouldn’t want to go through it again.

In fact, I owe my life to someone else – someone else’s heart.  And there are no words to describe the hours, and days, and months I’ve pondered on that person, his life, and his priorities.  I’ve wondered for many hours if he hunted, or fished, or even cared about the outdoors.  You see, there are days now when I don’t know my own heart, or at least like I knew the old one.  All that I know is…it just works.  Thankfully, it works!

I’ve watched a lot of TV in the past year – too much TV.  Too much of the Outdoor Channel, the Sportsman Channel, Pursuit, and all the hunting shows.  Frankly, I’m not sure if what I saw was a good thing.  80% of the subject matter is centered around deer, and deer hunting, and with that many people chasing them I’m surprised that there are any deer left to hunt, given the advances in hunting technology, combined with the encroachment of culture – building, development, and the constant demand by man for more land.

You see, hunting, and deer hunting in particular, has changed that much.  When my Uncle (Mel) started me hunting in the early 60s it was simple, much simpler than it is now.  You didn’t need a lot of equipment.  You just picked a good spot and waited.  He would tell me, “Sometimes you find a deer, but most of the time a deer finds you.  That’s why they call it hunting.”

But now it’s not enough to just wait.  It’s become an industry, not unlike fishing,  people are driving the business of hunting through TV and traveling clinics on how to kill more and bigger deer; and how to catch more fish.  Technology has made it easier, and because it looks easy on TV, it means people out there with questionable ethics, and no respect for wildlife.  They just want a set of horns.

Understand, I’m not the least bit opposed to hunting.  By honest count I’ve harvested about fifty deer in my life;  and probably missed half that many.  I can count six chest-type freezers that I’ve filled with venison over the years.  But it was different then, and more random.  We didn’t hunt all year long, seeking to find a deer and pattern its behavior before hunting season like the outdoors channels now promote.

I scouted some, for sure.  We looked for scrapes and bedding areas back in the day, and picked up sheds, but I’ve never used a trail camera.

My boys and I have planted food plots for years, because that’s a good practice for all wildlife.  But I’ve never baited deer with attracting agents.   Uncle Mel left some rows of unpicked corn in the fall.  But we never erected a mechanical feeder, as they do in Texas or properties operated by outfitting services.

I’ve never used scent blockers, or products to jam the sensory faculties of a deer.  I washed my clothes if I couldn’t stand my own odor, but where a buck was concerned I simply hunted with the wind in my face.

I’ve never taken a shot at a deer over 250 yards with a center fire rifle, or a hundred yards with a scoped shotgun.  I’ve never used a scope so technical as to calculate drop and windage.  I took that upon myself, and if the shot wasn’t ethical I didn’t take it.  Now they advocate guns and scopes that allow for taking an animal from as far as a thousand yards away.  This is the technology of modern hunting…and we call it ‘fair chase’.

I’m not judging, and I’m not condemning. I’m delighted to read on this website stories of young hunters who embrace the tradition for the right reasons and doing it the right way.  But I’m saying that the 170 inch buck that I shot in a Missouri creek bottom in the fall of 2001 means a lot more to me than bucks taken through contemporary hunting…because it truly was a ‘fair chase’ hunt.  While it was the biggest deer of my life, I had no idea it was even around.  I had seen scrapes and signs of deer activity, and frankly missed a couple of smaller bucks that week through mistakes of my own.  And then one morning at daybreak that deer walked down the trail and into the range of my crude cornstalk blind – just pure hunter’s luck.  I shot him with from 40 yards with a Remington 1100.

Today, that wouldn’t happen.  That deer would be under surveillance from the time he dropped his sheds in February ’til the time he grew new horns in summer.  Someone would know about him and track his every move and habit.  And they call that good hunting.  The 200 acres where I grew up hunting is now leased for deer, and if you walk across it in the spring to hunt mushrooms you’ll find no less than a dozen trail cameras documenting everything that moves. 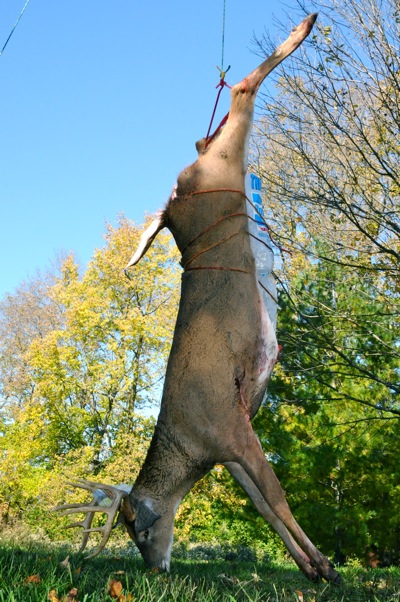 So I write this because of my concern about the future of hunting…and the impression given to the non-hunting public that the odds are so stacked in favor of the hunter that it’s not really hunting anymore, just shooting.  I watch shows produced by hunting ‘professionals’, who’ve shot dozens of deer, and yet hyperventilate over shooting one more.  I understand the excitement, but it’s a very poor impression if you want to sell someone on the ethics of hunting and management.

Without question…hunters are the reason there’s still game TO hunt.  They’ve paid for generations without complaint, through licenses and fees, to preserve and manage our natural resources.  And God bless game wardens, because they’re every bit as important to the outdoors as the state patrolman is to the interstate.  Poaching is akin to murder on the streets, and they put their life on the line every day.

But the modern message raises questions as to the future.  With some game species in sharp decline, particularly deer, at some point you have to even the odds.  Deer can adapt to subdivisions and live quite well.  But they’re helpless against the advance of technology and a shift in ethics.

I’m looking forward to getting back in the field, where I’ll still fish without fish finders and hunt without ‘radar’.   It’s been three years since I’ve been in the deer woods, but in that time I don’t think I’ve missed a thing…except the excitement of being in the right place at the right time, the fate that’s so much a part of “fair chase” hunting.  For sure I’ve gained a new life and a new respect for the old ways – respect for the inhabitants of woods and streams.

We all value some privacy.  Nature deserves nothing less.