Maria Stein – Pretty much everyone agreed…for St. Henry’s Carleigh Deitsch and Marion Local’s Nick Tangeman it was a perfect conclusion to a career of hard work and achievement on and off the court, or football field.

Deitsch and Tangeman received recognition and each a $2,000 award Thursday as the Press Pros MAC scholar-athlete award winners for 2018-19, as sponsored by Midwest Conference area businesses on Press Pros Magazine.com.

Deitsch, a three-sport athlete at St. Henry, received multiple all-conference recognition in volleyball, while participating in basketball and softball, as well.  She graduated with a 3.83 GPA and a score of 29 on her ACT.

And Tangeman, a member of Marion Local 2018 state champions in football and basketball, was a first-team all-state selection in 2019 as a wide receiver, setting a single-season receiving record for the Flyers with 1,250 yards and 17 touchdowns.  Tangeman graduated with a 3.75 GPA and a score of 24 on his ACT.

“This is such an honor,”  said Deitsch.  “Because, there are so many great athletes in my school and the league.  It’s really an honor to be chosen.”

“I have to thank the sponsors of Press Pros,”  added Tangeman.  “They make this possible, and I could not have done this without the support of my family, my coaches, and my teammates.”

Deitsch plans are to attend Ohio Dominican University, in Columbus, this fall and study biology.  Her career goal is to become an optometrist.  She is the first St. Henry athlete to be selected for Press Pros honors.

Tangeman will continue his education at the Ohio State University branch in Lima, come September, where he will study mechanical engineering.

This is the sixth annual award by Press Pros and Thursday’s presentation marked the $60,000th dollar of scholarships awarded by the website since 2012. 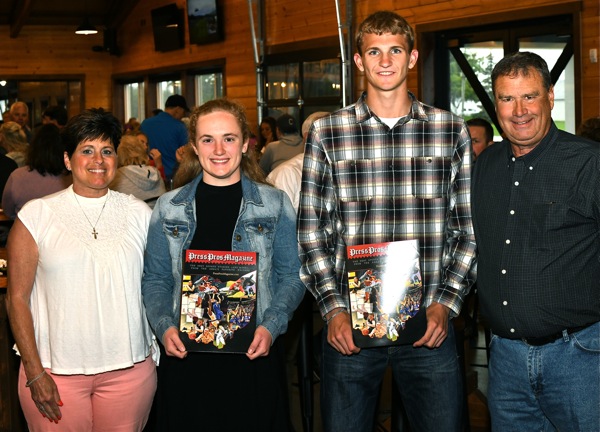