At The Tourney: C-J Wins Second Straight In Division II

He came back for a final year for one reason only.  Mike Barhorst wanted one more winning season as coach of the Eagles, and they sent him out in style – a second consecutive state baseball championship in Division II.

AKRON — Chaminade-Julienne baseball coach Mike Barhorst was sent into retirement the way every coach wants to go — lugging a couple of state championship trophies and nothing but pleasant memories.

Barhorst vacates his post to his son, Todd, taking with him two straight state titles and a 23-game winning streak. And C-J became only the ninth school in the 92-year history of the OHSAA to win back-to-back state baseball championships.

“If you want to win back-to-back, you have to come out and do what you did before and then some,” said Barhorst. “This year they worked harder than they did last year. They wanted to be here and knew they should be here.”

And they knew they should win.

“We don’t get worried when we give up a run,” he said. “They just know we might give up one, maybe, but we’ll shut ‘em down. We’re going to find a way to score runs and our pitching is going to keep them from scoring.”

Barhorst recalled last year when the Eagles were down a run in the state finals to Wapakoneta and came back to win it. 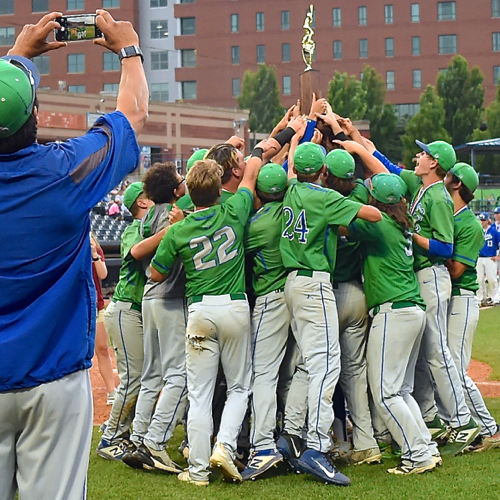 Picture them champs, again…as the Eagles hoist the Division II trophy for 2019.  Gordy Gongora (foreground) does the honors.

For Gongora, it was double indemnity. His two-run single in the seventh inning in last year’s state final game broke a tie and gave C-J a 3-1 victory. This time he did it on the mound, pushing his season’s record to 9-and-0.

Gongora recorded nine outs on ground balls, two each in the fourth and fifth to second baseman A.J. Solomon, a kid who looks as if his birthday suit was a baseball uniform.

“I just tried to pitch down in the zone and I know if I do that I get ground balls,” said Gongora. “I put a lot of trust in my defense and they know that. Every inning, before it starts, we gather at the mound and I tell them, ‘I need you, every single one of you.’”

While Gongora was the hitting hero last year, he was more excited about his pitching this year.

“The hitting was pretty intense, but the pitching is probably better because it is throughout the game. . .and I was first on the (celebratory) dog pile. That’s really fun.”

The back-to-back titles was the team’s goal, an extremely lofty and difficult road to pave.

“We were striving for it the whole season,” said the 6-foot-4 junior left hander. “Since it is coach’s last season, we wanted it. He told us, ‘Don’t do it for me, do it for you.’

“But, of course, we did it for him because of what he has meant to us and all he has done for us,” he added. 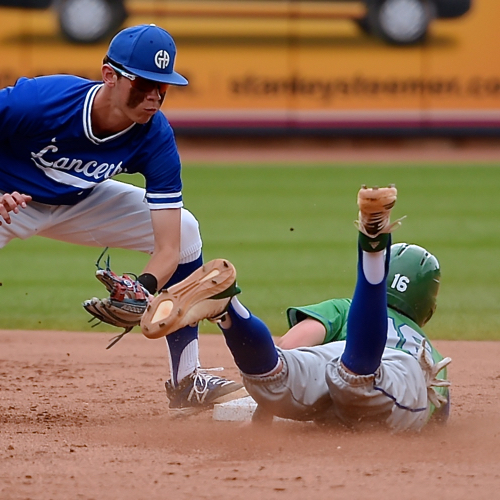 Yesterday’s pitcher, Nick Wissman, had a big day at the plate in the final, going 2 for 4 with 4 RBIs…and a stolen base here.

Gilmour was a mystery team when it took the field Sunday. The Lancers lost their last five regular season games, then snapped to it at tournament time, winning six straight, four via shutouts and they had outscored the opposition 49-7.

The Eagles extracted first flesh, scoring a run in the bottom of the first without a hit. Gilmour starter Joey Hollis entered the game with a 7-and-0 record, but wildness haunts him —37 walks in 49 2/3 innings.

True to form, he walked C-J leadoff hitter A.J. Solomon, owner of 29 stolen bases. He made it 30 thefts and continued to third on the catcher’s passed ball. That enabled Solomon to score on Nick Wissman’s ground ball to second.

“It is always great to get the early lead, get that first run,” said Gongora. “It takes the pressure off, makes it a lot easier.”

C-J made it 2-0 in the third, the inning ignited by a one-out triple into the left field corner by Andy Simones.

That brought up Nick Wissman, who has had considerable success on the mound in the Final Four the last three years. But success with the bat has been absent. He was 0 for 13 in three state tournament at bats when he stepped in after Simone’s triple.

Wissman quickly rectified that slight imperfection by pumping a run-scoring single to right field for a 2-0 C-J lead. 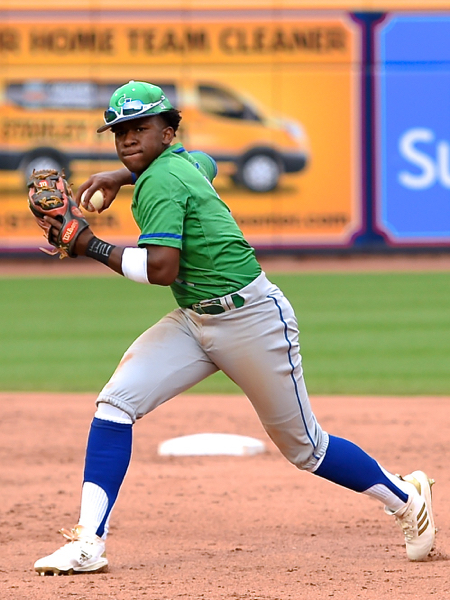 Gongora retired the first seven Gilmour hitters, three via strikeouts. Then trouble of a bizarre nature surface. Gilmour scored a run on a single, an error and a balk on Gongora.

The Eagles took the pressure off Gongora in the top of the seventh, providing him with two more runs, all scored with two outs and nobody on.

Christopher walked Andy Simones on a full count and Wissman struck again, banging a two-run single to left field for a 4-1 lead.

Asked if knew he was 0 for 13 over his three years of play in the state tournament, Wissman smiled and said, “Oh, yeah. I knew about it. I had joked about it going in. I thought maybe this was the year, the third time is the charm.

“I never thought about as long as we were winning,” he added. “As long as I was getting on base, I was OK with it.”

“Bunkers” is proud to sponsor coverage of area sports on PressPros Magazine.com.

Wissman pitched a two-hitter Saturday in a 7-1 semi-final win then put away the pitching to wave the big bat and said he was just trying to put metal on baseball his first time at bat with a runner on third.

That’s how he drove in the first run, a ground ball to second with a runner on third.

“I just tried to hit the ball to the right side to get that run in and it worked,” he said.

Of winning a second straight title, Wissman said, “He deserves everything he has had the last few years with these runs to the state tournament. To cap it off, he has 152 wins. He is a Hall of Fame coach right there.” 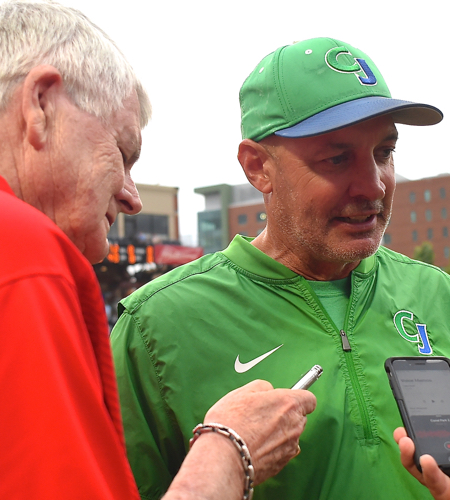 Said Barhorst of his two straight titles and 23 straight wins, “Pitching and defense has been our bread and butter the last four or five years. And that’s what got us here and how we won.

Barhorst considered retiring after last season’s state title, but everybody surrounding him begged for one more year.

“I thought about it, actually, after 2017 (a trip to state, but a loss) after my son graduated,” he said. “Then we won it last year and they talked me into coming back. I told them, this is going to be it.”

One of the defining aspects of C-J baseball is non-stop chanting emanating from the railing in front of the dugout — the entire squad in a line screaming as the opposing pitcher begins his wind-up.

The chant is something different nearly each time and, for the most part, makes no sense.

“The dugout has been a big part of our success, going way back,” said Barhorst. “Honestly , I played at Wright State and our dugout was very, very loud. It is like our tenth man and sometimes as they go, we go.”

So what are they chanting?

“I don’t even know what any of ‘em mean, honestly,” Barhorst said with a laugh. “They make stuff up and I don’t think they even know what they mean. We have senior (Brendan) Kadel in there and he leads stuff like that.” 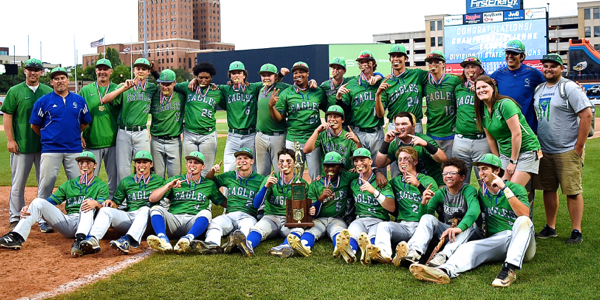 “The Spot” Restaurant, in Sidney, is proud to be the official sponsor of the 2019 OHSAA State Baseball Tournament on staging.pressprosmagazine.com. 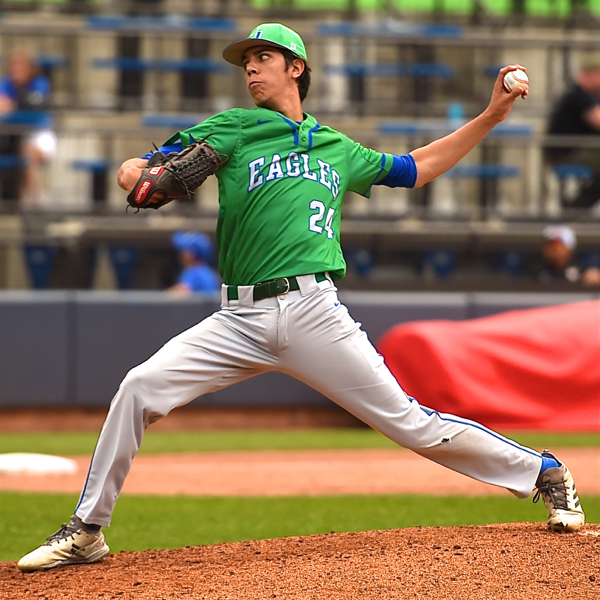