One Hit Away… Tigers Come Up Short Against Roger Bacon

The Versailles Tigers gave it a good run in the Division III regional final on Friday behind solid pitching from Garrett Toops and defense. All that was missing was a clutch hit in a 2-0 loss to Roger Bacon at Wright State University.

Fairborn – The sound of baseballs smacking into leather gloves will again be heard in the Versailles High School gymnasium in January. It’ll be the start of a new high school baseball season, or at least the beginning of open gyms.

The sting of Friday night’s Division III regional final loss will also hang in the air. Versailles dropped a tough 2-0 loss to Cincinnati Roger Bacon at Wright State University that won’t soon be forgotten. The Tigers did just about everything right … except come up with a game-breaking clutch hit.

Their best chance in the top of the seventh when the Tigers loaded the bases.

Nick Wagner, hitting No. 7 in the lineup, reached on a one-out walk. Connor VanSkyock ripped a grounder that Bacon shortstop Jake Speed knocked down to keep Wagner from advancing to third. After a strikeout, lead-off hitter Andrew DeMange walked to load the bases.

Kyle Pothast then bounced a grounder back to Bacon pitcher Chris Hoffman. Hoffman, who faced the final three batters, threw to first to set off the Spartans’ state semifinal clinching celebration. Pothast dropped to his knees at first base, overcome with a different set of emotions.

“You can’t ask for a better situation to be in – especially down – getting bases loaded and having the top of our lineup coming up,” Versailles coach Ryan Schlater said. “Unfortunately we were on the wrong side of it. You can’t be more proud of our seniors, our players, our coaching staff, everything.”

Versailles (17-10) managed four hits against Roger Bacon starter Tyler Bullock (2-0). He entered the game with 12.1 innings pitched, but got the ball and a vote of confidence from Spartans coach Tim McCoy.

The Tigers put runners on base in the first four innings before loading the bases in the seventh. Versailles stranded eight runners overall.

“We were in the game the whole time. You can’t fault anything,” Schlater said. “There wasn’t a mistake made. (Roger Bacon) had some timely hitting when they needed.” 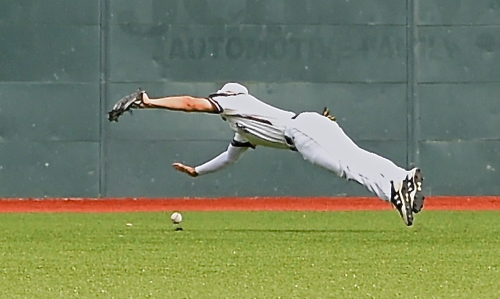 Roger Bacon couldn’t come up with Zach Griesdorn’s double in the third inning.

It came in the fourth inning. Versailles ace Garrett Toops held the Spartans (18-9) to one hit and three base runners through the first three innings. Bullock reached on a one-out single past a diving Will Eversole at third base. Chris McDaniel lofted a fly ball down the right-field line that dropped inches in fair territory putting both in scoring position.

Evan Webb scored both runs with a single to left through a drawn-in infield.

“We kind of expected a pitchers’ battle,” said Schlater, who got exactly that from Toops, who entered the game 4-2 with a 2.30 earned run average. “My hats off to Garrett how well he pitched. It was unfortunate he gave up the two runs but he pitched his tail off the whole game.”

Roger Bacon threatened again in the sixth. Dylan Polk led off with a double but was erased on a double play when Bullock grounded out to third. Polk tried to advance on the throw and was tossed out at third base for the 5-3-6 double play. McDaniel then singled with two outs and Webb was hit by a pitch. Pothast ended the inning by catching McDaniel trying to steal third.

“They’re a great team,” Schlater said. “They might be in the finals next week. We had situations. They had a situation where they had three straight hits and scored two runs. They strung them together and we couldn’t do that.”

Toops led off the second with a single and advanced to second on a Brayden Robinson sacrifice bunt. Wagner walked, but Bullock struck out the next two batters to end the inning. 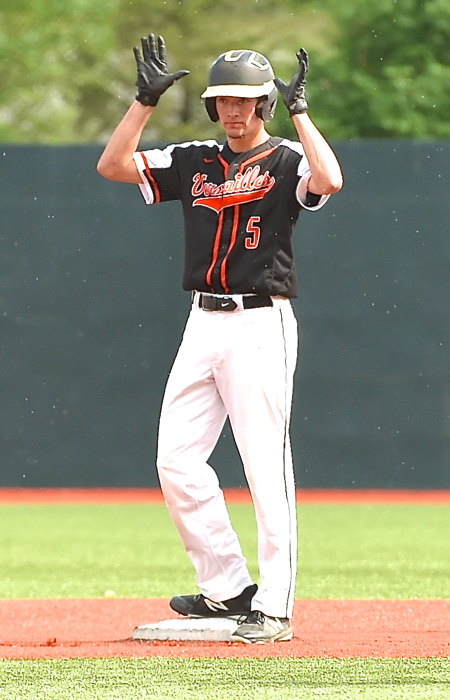 Zach Griesdorn giving the “double” stance after slamming one into the left field.

Zach Griesdorn stroked a two-out double in the third, but was stranded after an inning-ending flyout to right.

Bullock allowed four hits, struck out three and walked two. He hasn’t allowed a run in 18.2 innings pitched this season.

“Once he got out there and started dominating the last couple of weeks we were trying everything we could to get him in games,” McCoy said of Bullock, who dealt with an arm issue early in the season. “We would have our starters go deep so he just started picking up innings in the tournament.

“He started throwing toward the end of the season. He’s just been incredible. He was down in the zone the whole time. He was fantastic.”

Versailles was trying for its ninth state appearance and first since 2016. For Roger Bacon, it’s their first trip to state since 1968 and fifth overall.

“This is our first time being here in a long time,” said McCoy, whose team finished second in the Greater Catholic League’s Central Division. “We said in the beginning of the year … this was our goal. We said we were going to get to the final four. We play in a tough league. Our record might not be sparkling but we play in a really tough division.” 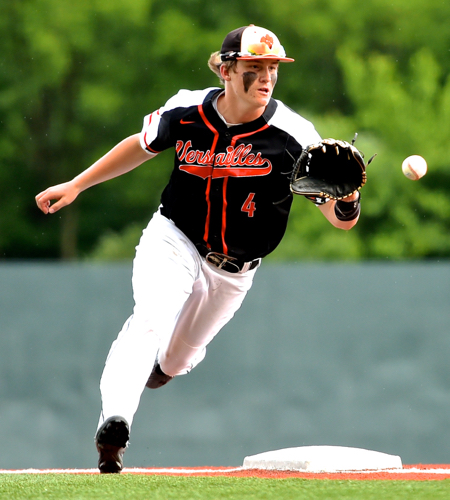 Tigers’ third baseman Will Eversole charges a grounder in the D-III regional final.

Versailles can relate. The Tigers finished fourth in the Midwest Athletic Conference and at one point were scuffling to stay above .500 after a stretch that saw them lose five of seven games.

“From then on we kind of had a meeting and talked as a coaching staff with the players,” Schlater said. “We had one direction to go and we could chose our destiny. They kind of clicked from there and had a great end of the year run.”

“We talked (after the game) about how much time and effort they put into it. We’ve had so many open gyms starting in January. Those nine guys are staples at every single thing we’ve done,” Schlater said. “They set the example the younger guys will follow for what it takes to be a successful program.”

And the Tigers will be back to try it all again next season. Starting with those open gyms.

“It’s tough. It’s something you don’t get over in a day. You don’t get over it in a week or maybe a month,” Schlater said. “That’s the thing with baseball. It’s going to come around here in January and they’re going to be ready to go. We have a lot of freshmen, sophomores and juniors ready to go and take that next step next year.” 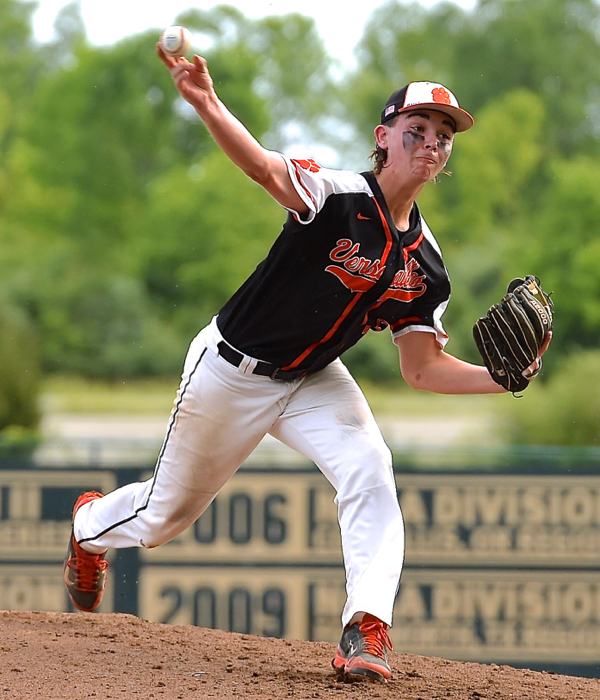 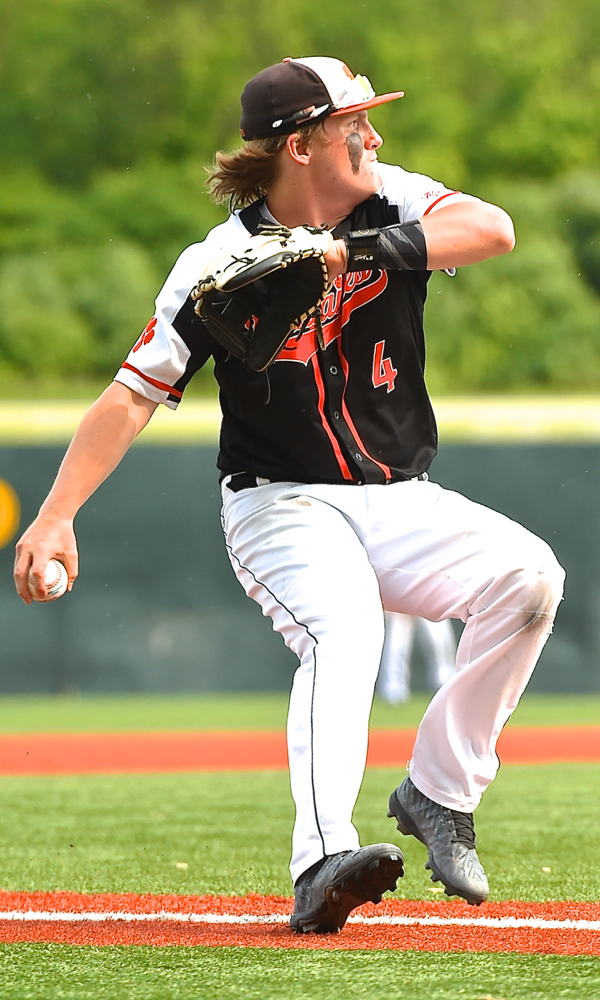