From The NCAA: Vanderbilt Has Wall to Wall Talent As No. 2 National Seed

Nashville – Vanderbilt might as well be entering the NCAA baseball tournament with a finger pointing to a muscular biceps like those photos of old school body builder Charles Atlas showing off his physique.

How ripped is this bunch?

The Southeastern Conference tied a record by landing 10 teams in the tournament this week, and the Commodores pretty much put those teams through a grinder in turning them into hamburger.

Vanderbilt (49-10) swept Auburn and Florida and took two of three games from Arkansas and Missouri in conference. It did lose two of three to Texas A&M and Georgia.

In non-conference games, there were victories over Virginia, Cal State Fullerton and Louisville.

There was no great surprise on Monday when Vanderbilt was awarded the No. 2 overall seed in the 64-team tournament.

“The (seeding) came from the body of work over the course of the year,’’ coach Tim Corbin told The Nashville Tennesseean. “I think the word consistency keeps coming to mind when you talk about this group. They have put themselves in good situations. But they have handled those situations consistently.’’

Vanderbilt will be seeking a 23rd victory in 24 games when it plays Ohio State (35-25), the Big Ten Tournament champion and fourth seed in this regional, at 7 p.m. Friday at Hawkins Field on campus.

Second-seeded Indiana State (41-16) plays third-seeded McNeese (35-23) in the other first-round game at noon.

“But we are going to keep staying consistent, get back to the middle and do our thing,’’ he said.

This team has a batting average of .319 and gives the feeling that opponents are throwing underhanded to the plate.

There are not one but two Golden Spikes Award candidates as the nation’s top Division I player.

Bleday leads the nation with 26 home runs and has 67 runs batted in and a .357 batting average. Major League Baseball draft experts think he’ll be chosen among the top five picks. He was voted SEC player of the year and SEC tournament most valuable player. 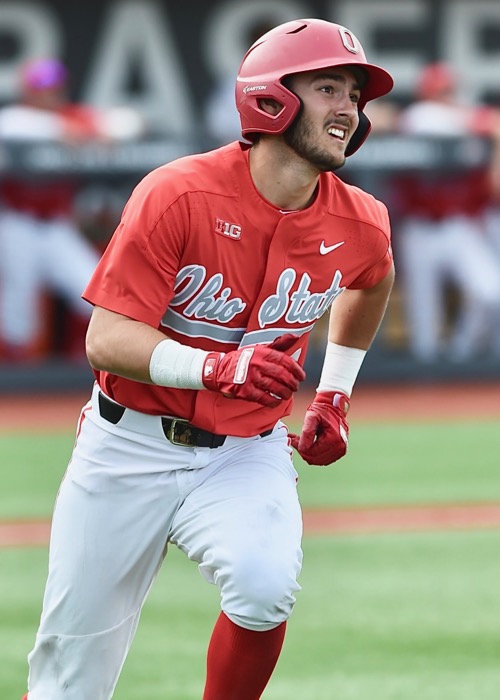 Dominic Canzone leads the Buckeyes with a .350 average.  Vanderbilt has a ‘team’ batting average of .319!

Third baseman Austin Martin has is batting .414 with six home runs and 36 runs batted in.

But there is so much more to this team than two players. Seven others have driven in 30 or more runs and the pitching staff has a 2.29 earned run average.

Pitcher Drake Fellows is tied for the major college lead in victories with 11. He does not have a loss.

Vanderbilt has become a household name in college baseball circles with 14 straight appearances in the NCAA Tournament. It won a national championship in 2014 and was runner-up in 2015 and made it to the College World Series two other times.

Big leaguers coming out of the program have been David Price, Joey Cora, Sonny Gray and Dansby Swanson. Price was the Golden Spikes winner in 2007 and Swanson the national player of the year in 2015.