Omaha, Nebraska – The complexion of a college conference baseball tournament can change in a matter of innings like the cell phone coverage in the boondocks, and Ohio State rudely was made aware of that Saturday afternoon.

It turned into a dog day afternoon.

The Buckeyes and Nebraska had been the talk of the Big Ten Tournament since the first pitch on Wednesday, and rightly so. Each won their first two games with precise play while the other six teams struggled to figure things out.

Everything changed when Minnesota, led by sophomore right-hander Max Meyer’s lights-out fastball and two home runs by Eduardo Estrada off the bench, punched Ohio State in the gut 9-6 in a semifinal at TD Ameritrade Park.

The Buckeyes (33-25) erupted for six runs to make things interesting, the big hits being a three-run double off the wall in right-center by Brent Todys in the eighth and two-run homer by Dillon Dingler in the ninth.

But they went from holding the hole card to being within one defeat of elimination or one victory from Sunday’s championship game.

Minnesota third baseman Jack Wassel all but put an end to any thoughts of a spectacular comeback victory with a bases-loaded triple off the glove of left fielder Brady Cherry in the top of the ninth that made it 9-4.

Ohio State had some time to think about its next game. It will face the Gophers (29-26) at noon Sunday for the right to play Nebraska in the championship game at 4 p.m.

The Cornhuskers also won their first two games of the tournament, but were run off the field 18-8 by the Wolverines in the morning in the other semifinal. That game took 4 hours, 8 minutes to play and had the Buckeyes clock watching with regard to the curfew for their second game of the day.

What will get lost in all of this was freshman Will Pfennig, a reliever making his third college start, manning up by pitching 7 1/3 innings of seven-hit ball. He threw 112 pitches. 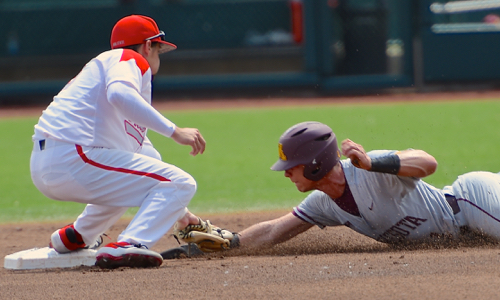 Buckeye Matt Carpenter tags out a Minnesota runner at second base.

His final line was skewed by the fact that reliever Mitch Milheim gave up three of his charged four runs. The lone run to score directly off Pfennig came in the fifth on an error by second baseman Matt Carpenter.

Milheim gave up a leadoff home run to Estrada pinch-hitting in the seventh and a three-run bomb as the designated hitter in the eighth that bumped the lead to 6-0.

Speaking of hole cards, Minnesota coach John Anderson had an ace inside his sanitary stocking in Meyer. He had not pitched since spraining the left ankle tripping over a bat backing up home plate against Maryland in a 7-3 loss on May 10. He lasted all of two-thirds of an inning in that one.

All week, Anderson was asked when Meyer might return, and the reply was “not yet.’’

Meyer’s time came against the Buckeyes. He shut them down on three hits, no walks and seven strikeouts in 5 2/3 innings. Fifty-three of his 75 pitches were strikes.

There aren’t too many No. 1 starters in the country like Meyer. The sophomore was voted first-team All-Big Ten as a freshman last season when he tied a team record for saves with 16.

Last summer, he saved seven games and had 15 strikeouts in eight innings playing for the USA Baseball Collegiate National team.

Anderson moved Meyer to the rotation, and the results were predictable. He entered the conference tournament with a 4-3 record 2.28 earned run average in 15 games covering 10 starts. 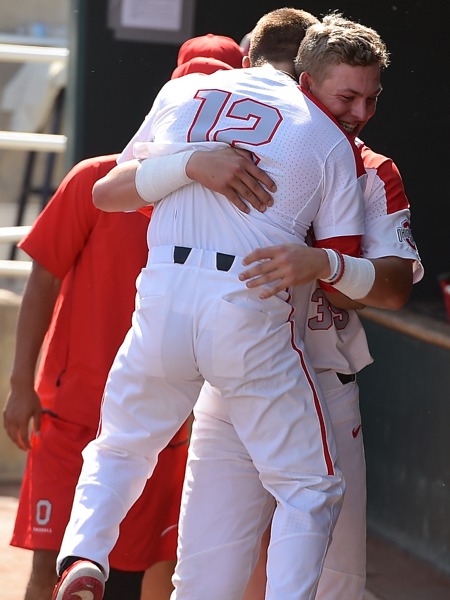 Brent Todys slammed an opposite-field shot off the base of the wall in right-center to clear the bases in the eighth.

How overpowering has he been?

Meyer gave up 55 hits and struck out 80 in 71 innings and opponents were batting .207 against him.

Ohio State managed a one-out double by Carpenter in the first inning off him and a leadoff triple in the fourth by Dingler that center field Ben Mezzenga misjudged badly. Both were left on base.

The Buckeyes’ bats finally showed life in the eighth against reliever Jake Stevenson when Dominic Canzone led off with a single to right. A walk to Carpenter, an error by the first baseman on a grounder by Cherry and bases-loaded walk by Conner Pohl brought in the first run.

Todys slammed an opposite-field shot off the base of the wall in right-center to clear the bases and chase Stevenson.

Until that inning, Ohio State had been shut down in the tournament. It had three hits in a 2-1 victory over Michigan and four in a 3-2 win over Maryland. 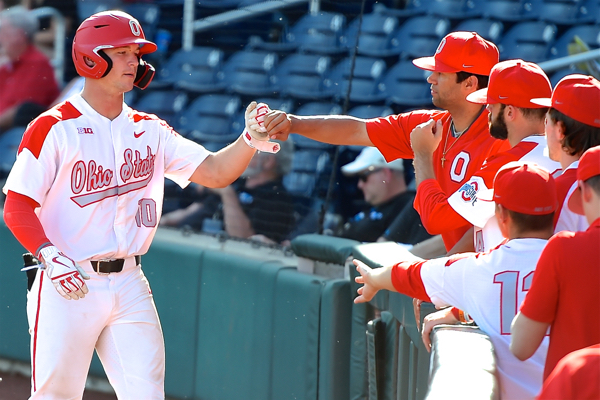 Dillon Dingler made it interesting with his home run in the ninth. 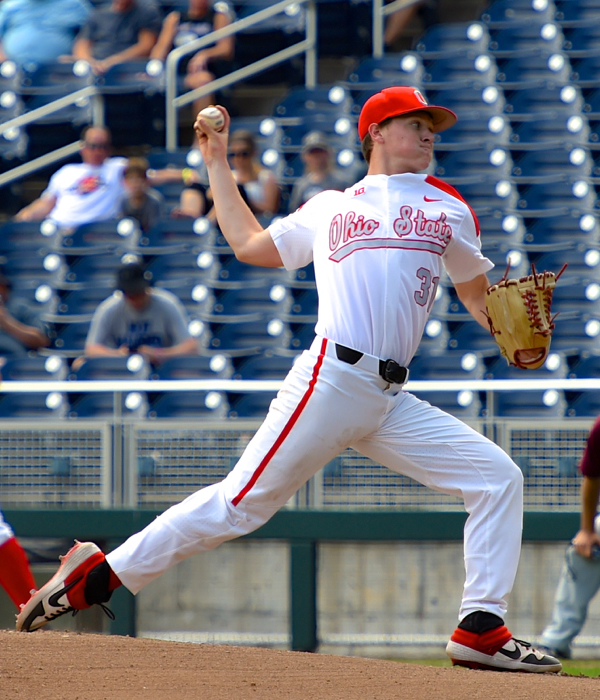