Buckeyes lean on their closer in advancing to Big Ten semifinals.

Omaha, Nebraska – It’s a good thing that Jake Vance’s body clock runs on the same time as his Hilton Hotel roommate at the Big Ten Tournament, or he would have gone absolutely bonkers about six minutes after sunrise Friday morning.

Relief pitcher Andrew Magno almost beat the roosters crowing on the nearby farmland in getting out of bed at 5:30 to resume thinking about how he was going to pitch to Maryland left fielder Michael Pineiro.

The team breakfast wasn’t until 7 o’clock two floors below.

Magno was on the mound for Ohio State with a runner on second and one out in the bottom of the eighth inning when a heavy lightning and rainstorm suspended a second-round game against the Terps on Thursday night at TD Ameritrade Park.

The Buckeyes were leading 3-2 and there was no doubt that coach Greg Beals would bring back his closer when the game was restarted at 11 a.m.

There has to be something about that early to bed and early to rise axiom as Magno struck out Pineiro and catcher Justin Vought in the eighth and pitched through a leadoff walk in the ninth to preserve the victory.

The second game within a game took all of 21 minutes. The winning run scored on a sacrifice fly by freshman shortstop Zach Dezenzo in the eighth.

Seventh-seeded Ohio State (33-24) earned the right to prop its feet up in the hotel all day long in waiting to find out its semifinal opponent at 2 p.m. Saturday. Next up will be 2018 champion and fourth-seeded Minnesota (28-26), a 3-0 victor over Iowa in an elimination game.

It was the third save in as many leverage games for Magno. He also helped secure a victory over Purdue in the third game of the final regular season series to get the team into this tournament and against Michigan in the first round of the tournament.

“I got to bed pretty good, but I woke up at 5:30 and couldn’t get back to sleep,’’ Magno said. “I kind of just fiddled around. I’m rooming with Jake Vance. Jake woke up at 6 a.m. and we were just kind of hanging out. It was tough going back to sleep knowing what I had to do. In my room I actually played out those first three pitches to that lefty (Pineiro) and executed them. It was tough to stay in bed.’’ 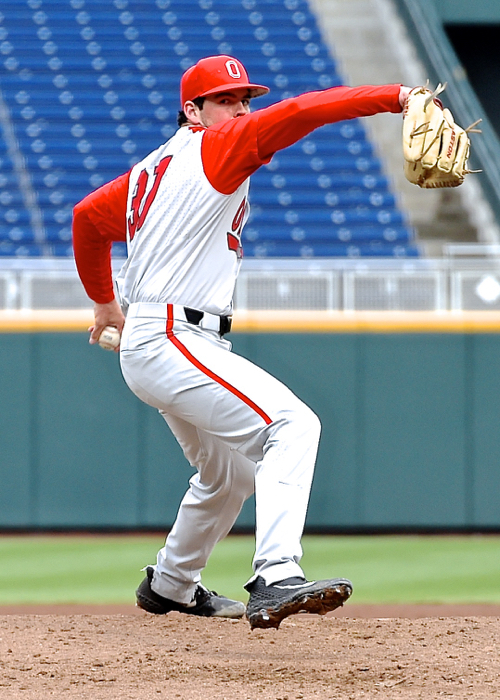 Griffan Smith did his job and took the Buckeyes into the seventh inning with 10 strikeouts, giving up five hits and two runs.

Magno, a junior left-hander from Dublin Scioto High School in suburban Columbus, has experience in tournament baseball from his summer league days as a teenager.

That’s when you throw so much because there are so many games packed together that a pitcher’s arm can feel like it has a massive headache from the shoulder to the elbow.

“I had to do it as a junior in high school during those crazy championship Sundays,’’ he said. “You might play three games in a day. I once won the first game (as a starter) and helped finish the last one.’’

There was no question that coach Greg Beals was going to keep Magno in the game. He threw 38 pitches.

“We’re at the point in time where he’s the go-to guy,’’ Beals said.

What has happened to Magno in transforming from thrower to pitch-maker?

“He’s pitching,’’ Beals said. “He has always been a thrower with good stuff. His stuff has been good since his freshman year, but the pitchability of his stuff hadn’t been there. Andrew has learned how to pitch with his good stuff. With that good stuff – the fastball up to 93 and 94 miles and hour and a good tail on the breaking ball with pitchability beside that – that makes him tough.’’ 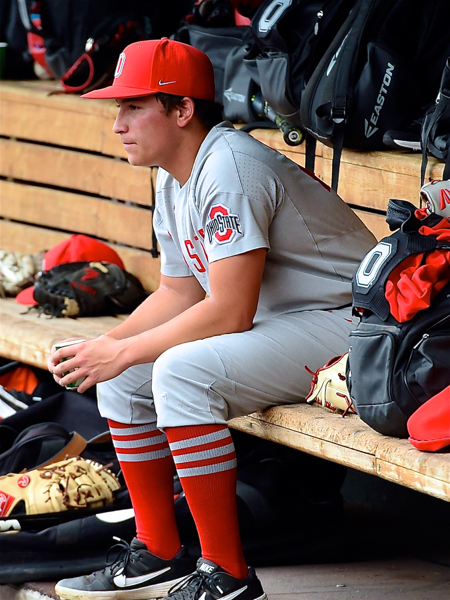 Andrew Magno mentally collects his thoughts between eighth and ninth inning, to pull-off another save for the Buckeyes.

Magno threw 86 pitches in four innings in getting the victory in relief in a 10-9 decision at Maryland in the middle game of a series on April 20.

“Goodness gracious, I’ve seen way too much of Magno,’’ Vaughn said. “That guy is pretty special on the back end to be able to throw a lot of pitches and throw three days in a row and to be electric every time. He stood up like what an older guy should do and made some good pitches to good hitters. Unfortunately, we were one swing short of tying things up.’’

Magno could have buckled walking Josh Maguire on a full count leading off the ninth, but he made a waist-high throw to first base to get the first out on a sacrifice bunt by Chris Alleyne. He struck out Benjamin Cowles on four pitches and got No. 1 hitter A.J. Lee on a soft fly to center to end the game.

“I felt good in the continuation of the game,’’ he said. “I got us two outs (in the eighth) and just settled back in. It was a quick turnaround. The biggest thing for me was making a good throw on that bunt and getting an out. After I did that I said, ‘Okay, we’ve got this. Runner on second with one out, I can do this.’’’

The man who shouldn’t get lost in all this is left-handed starter Griffan Smith. He was magnificent before the suspension in striking out 10 and giving up five hits in working seven innings.

The only mistake he made was a two-run homer by Big Ten freshman of the year Maxwell Costes in the third inning. He hit an inside fastball above the letters that a majority of batters would have taken for a ball or swung and missed badly.

It was a comeback for Smith. He was staked to leads of 8-0 and 9-1 against Purdue last Saturday, but gave up eight runs in 3 2/3 innings. Seven runs were scored in the seventh.

Smith never let Maryland get into rhythm. He also beat them in the third game of a series 5-1 on April 21 in College Park to secure a series victory. 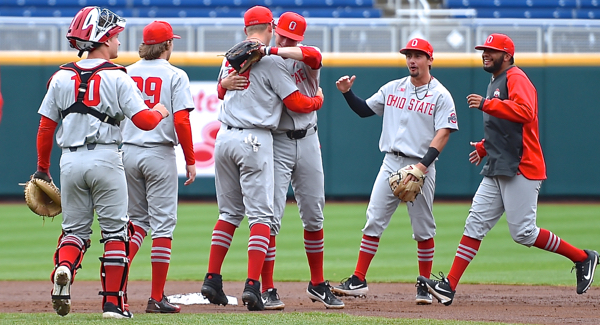 Well deserved win! It took five-outs Thursday morning to give the Buckeyes a day of rest for their next game scheduled for Saturday at 2pm (eastern) to play the winner of the Iowa and Minnesota game.

It was no small feat with Maryland having ranked second in the conference in home runs and third in runs scored.

“I think the biggest thing is trust in myself and trust in my teammates and trust in the pitches that were called,’’ Smith said. “I proved myself early in the season that I could do it against Maryland and other teams as well. My goal was to go out there and do what I did earlier.’’

The start of the game Thursday was delayed one hour by rain and there was a threat of impending storms, but he pitched on.

“Honestly, it was the same as I always do,’’ Smith said. “I didn’t think much about it. I know we were pushed back and hour or so, but that gave me more time to prepare. I felt as I went along in the game that I got more feel for my pitches. In the sixth and seventh innings I was just letting it loose and trusting myself and it paid off.’’

“We’ve seen Ohio State for the fourth time this year and Griffan Smith is something else,’’ he said. “He has thrown the ball well against us twice. He has a really good arm and has a good fastball and his changeup is a plus pitch. We couldn’t string anything together against him.’’

Beals’ opening statement during the post-game news conference was high praise for the resiliency of his team.

“I don’t know whether to consider this a long game or short game, but whatever it was is that’s the one thing I’m really proud of is that our guys needed no coaching as far as dealing with the rainout and having to come back,’’ he said. “It required no motivation and no talk.’’ 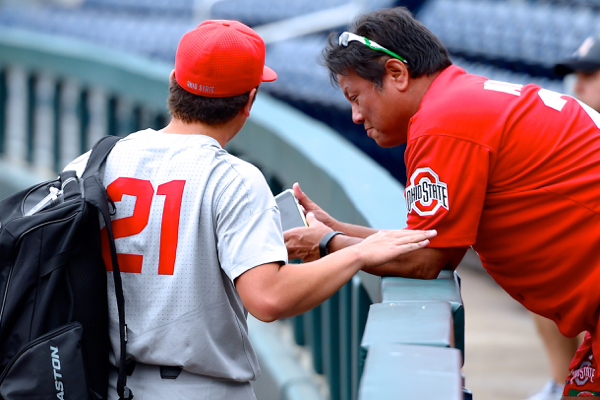 Andrew Magno and his dad have a few moments together after Magno throws his second save for the second win for the Buckeyes in the B1G tournament. 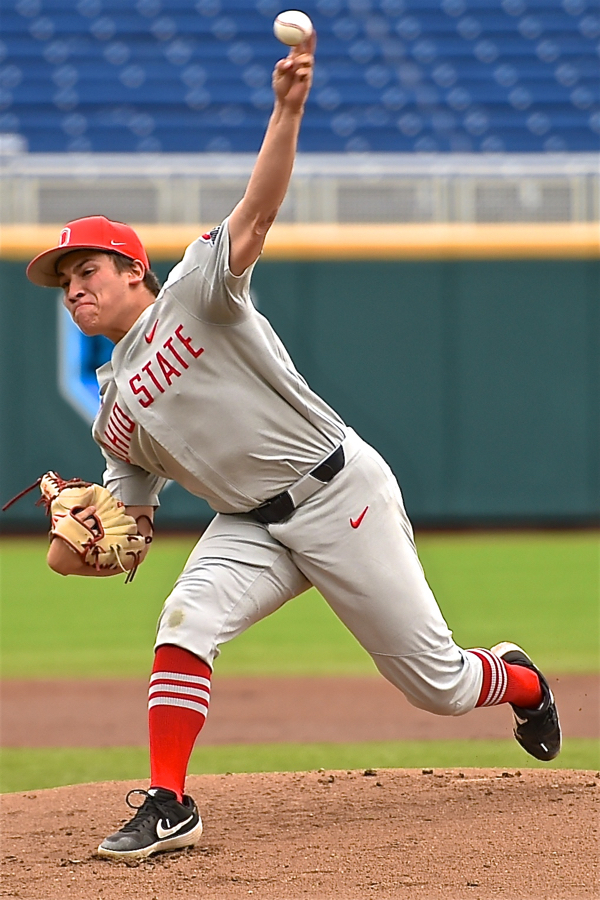 “Goodness gracious, I’ve seen way too much of Magno, That guy is pretty special on the back end to be able to throw a lot of pitches and throw three days in a row and to be electric every time." - Maryland Coach Vaughn (Press Pros Feature Photos By Julie McMaken Wright)