Maligned Bullpen Stands Out In Buckeyes Win Over Wolverines

Pfennig and Magno have learned from growing pains early in season.

Omaha, Nebraska – The sight of Ohio State coach Greg Beals walking to the mound to make a pitching change sometimes makes a lot of people instinctively reach for an imaginary seatbelt as if they are in an automobile about to do some off road driving.

For most of the season, the bullpen has been running hot and cold and even downright frigid in lockdown situations. The lead has been blown so many times that it’s fair to say a half dozen games have been lost.

But the Buckeyes wouldn’t be in the winners’ bracket of the Big Ten Tournament without the work of freshman Will Pfennig and junior Andrew Magno.

These relievers are beginning to get their feet down just at the right time.

Pfennig got out of a jam left by starter Seth Lonsway in the sixth inning and followed with a perfect seventh and Magno quickly retired the last six batters during Ohio State’s 2-1 victory over Michigan on Wednesday in the Big Ten tournament at TD Ameritrade Park.

The key in any double-elimination baseball tournament is to avoid the losers’ bracket, especially in the opener, to save wear and tear on the pitching staff.

No one knows better than Beals and pitching coach Mike Stafford what a wild ride it has been breaking in so many first-year relievers to replace the great closer Seth Kinker.

That patience and persistence is beginning to pay off.

“There were some ups and downs,’’ Beals said. “We played really well at times and we let some games get away from us at times. The bullpen early in the year (was a problem). Those are the growing pains for a young pitching staff and we anticipated some of that.’’

The pitfalls of February, March, April and early May have been turned into learning experiences that are being applied.

“Will Pfennig has had the ball in his hand enough times and Magno in that role enough times now,’’ Beals said.

The most difficult part, he said, was finding out where the relievers fit best. 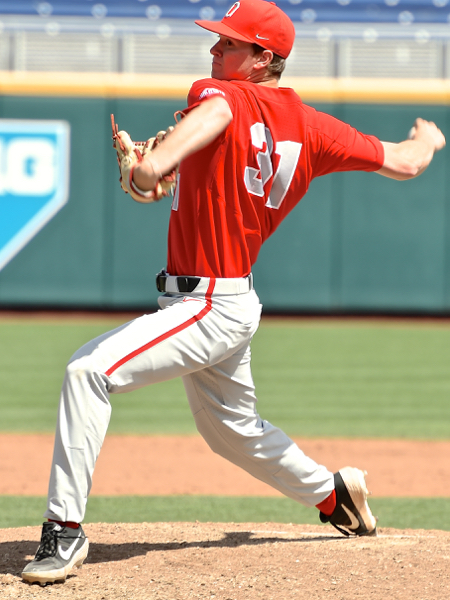 Will Pfennig took the win for the Buckeyes with no hits, no runs, one walk and three strikeouts before handing the ball over to Andrew Magno for the save.

Yesterday, he didn’t look like a man fresh out of high school, and that’s because he’s not.

Starter Seth Lonsway was pulled after 5 1/3 innings and with runners on first and second with one out, and a double steal with Pfennig pitching put them on second and third.

Michigan led 1-0 and another run or two could have meant the end for Ohio State.

Pfennig walked Blake Nelson, but got Ako Thomas on a swinging strikeout and Jordan Nwogu on a lazy fly ball to center field to end the threat. That afforded the bats time to figure out Michigan starter Karl Kauffman, and they did just that by scoring two runs in the eighth.

“I knew we had one out when I came in, and that’s a situation I feel comfortable coming into the ballgame that way,’’ Pfennig said. “My main thing was to throw strikes, and I put up quality strikes. I walked the first guy, but thought I was making quality pitches. Some calls just didn’t go my way. I thought I was pounding the zone and making pitches I wanted to make.’’

It’s, well, a relief for a team seeing a reliever attacking batters knowing he can get outs.

These days, Pfennig realizes it could be his time to be that man from the sixth inning on.

“I always want the ball,’’ he said. “Throughout the year I’ve felt more and more comfortable in that role. I’ve found myself and trust myself to come into the game. I feel like a completely different pitcher. I think I locate on both sides of the plate better and feel like I have a lot more experience coming into the game knowing what to do right away. I can figure out what to do right away rather than figuring out what to do two or three batters later.’’

Told that he has come a long way since some awful times, Pfennig smiled. 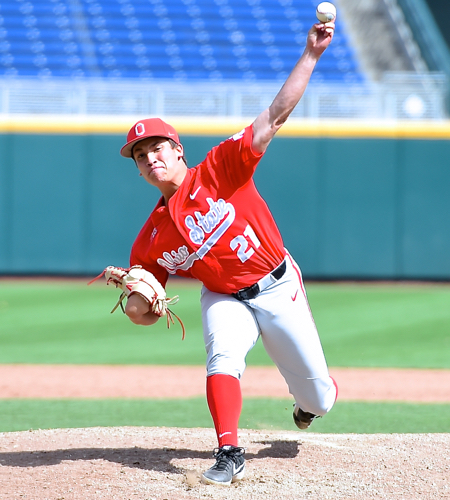 Andrew Magno now has 11 saves for the Buckeyes.

Magno has a rubber arm in that he can throw many pitches on consecutive days. He clearly wants to be the next Kinker.

The worst thing for him is getting too excited.

“It was mainly trying not to over-hype it today,’’ he said. “Sometimes I get in those situations with a lot of pressure that I can hype myself out and get too jittery and too quick. I think that’s what happened at Purdue last week when I came in, but then I settled in. I took it one pitch at a time and was able to battle back from some 2-and-0 counts. I threw some quality pitches to get some outs.’’

What was the key for him?

“I took deep breaths and just attacked and did what I’m good at,’’ Magno said.

Michigan coach Erik Bakich was not asked about Magno, but threw out a comment.

“Magno is a good reliever, a good closer, for them,’’ he said.

Against Purdue last Saturday, Magno got the victory by throwing 104 pitches. No one ever got up in the bullpen to warm up.

Kinker was a case study for him.

“That’s a guy you learn from with the way he does things and goes about his business, and it was fun,’’ Magno said. “In the seventh inning and if we were up, you knew who was getting the ball. I like to think when we’re up late I’m going to get the ball. It’s fun to be in that role and own that. I worked really, really hard watching what he did and trying to learn from that. That guy really taught me how to do things.’’ 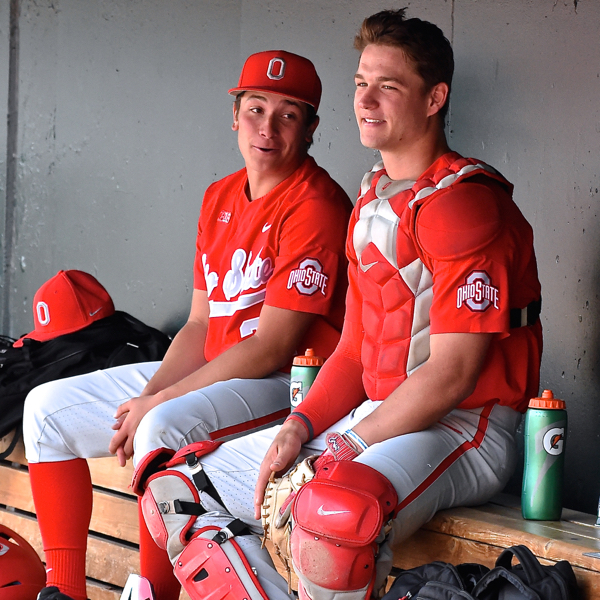 Andrew Magno and Dillon Dingler chill between the eighth and ninth inning. 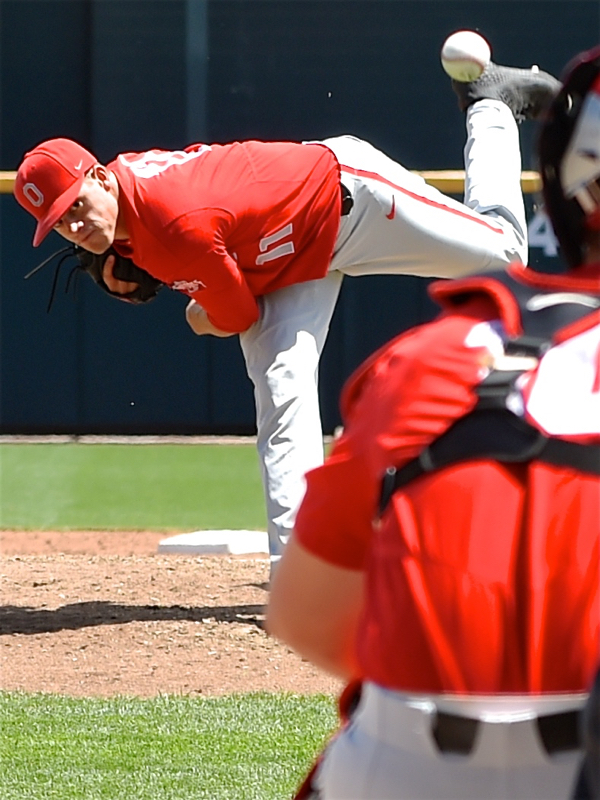