Scramble for championship, and the immense TD Ameritrade Park changes everything as top eight teams vie for an NCAA bid.

Omaha, Nebraska – Nebraska always will be the unofficial home team of the Big Ten baseball tournament as long as it is played in TD Ameritrade Park, and what better evidence was there

than when a sea of television cameras, notebooks and microphone carrying media descended on coach Darin Erstad on Tuesday.

The head count had to be close to 15. The other seven coaches who have teams here talked to two or three people tops.

Erstad should have a pretty good feeling about the Cornhuskers (28-20) going into a first-round game against Minnesota (26-25) at 10 p.m. Wednesday with his team having taken two of three games against Michigan the final week of the regular season.

That series, he said, won’t get Nebraska a worn-out box of baseballs. The team is seeking its first championship in six appearances.

“It’s a completely different animal,’’ Erstad said of the eight-team tournament. “Who knows what’s going to happen? Just because you swung the bat well or pitched well a couple of days ago has no bearing on what happens now. It’s tournament time. It’s playoff time. It’s just doing the little things. Maybe guys step up who didn’t do certain things during the year. That’s why it’s fun.’’

Erstad said that even Penn State, which didn’t qualify, could have won the tournament.

“There is a team that finished last in our conference that (could have won) this tournament with its pitching staff,’’ he said. “That’s the depth of this tournament. It’s going to boil down to who plays good baseball and who gets hot and gets key hits. It’s pretty wide open.’’

“You have to win. That’s the simple answer,’’ Heller said of taking the trophy and getting the automatic bid to the NCAA tournament. “You have to win the first two or three games and stay out of the losers’ bracket and then just play as well as you possibly can. There is nothing magical about it. You have to play well and find a way to win at this point.’’

Ohio State coach Greg Beals duly noted that TD Ameritrade plays bigger than a lot of major league stadiums. The wagering is that there won’t be any home run hitting contests.

The grand daddy of Big Ten baseball, John Anderson of Minnesota, said the winning team must play to the ballpark. One must listen to him because he is the Big Ten tournament title whisperer with 10, including last season.

“From my experience here, No. 1, you have to pitch and have some pitching depth,’’ Anderson said. “You’ve got to win four games. If you get to the losers’ bracket you have a big challenge from a pitching standpoint. It’s obvious this facility with the playing surface there’s a lot of room out there. It’s your ability to play defense, especially outfield defense, in a big ballpark that becomes critical. Of course, there’s timely hitting. You are going to see outstanding pitching in this league.’’

The Big Ten tournament has been a crap shoot with no team winning in back to back seasons since Indiana in 2013 and 2014. Beginning in 2015, the champions have been Michigan, Ohio State, Iowa and Minnesota.

How diverse has the conference become?

Also, Minnesota leads in total tournament championships with 10, followed by Ohio State and Michigan with nine each. The next best team is Illinois with four.

Right fielder Dominic Canzone, who has had one of the most spectacular seasons in Ohio State history, was the only Buckeye to make first-team All-Big Ten.

Michigan outfielder Jordan Brewer was player of the year, Indiana’s Andrew Sallfrank pitcher of the year, first baseman Maxwell Costes of Maryland freshman of the year and Jeff Mercer of regular-season champion Indiana coach of the year.

Ohio State junior first baseman Conner Pohl stands 6 feet 5 and weighs 225 pounds, which makes him the biggest boy among “The Boys’’ in the clubhouse. Yet until recently, he was hitting like a utility infielder with one home run. 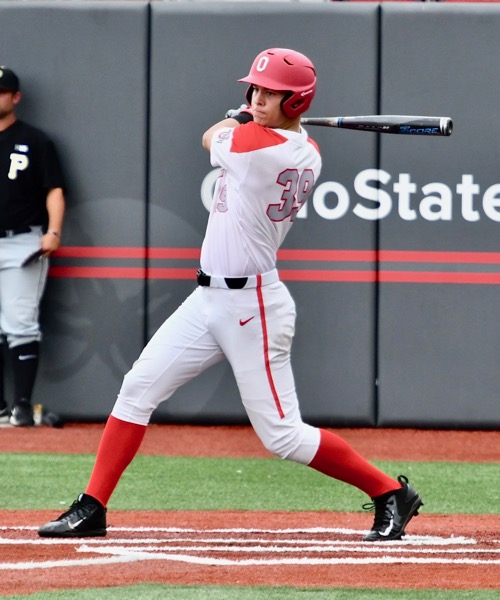 Conner Pohl has caught fire at the right time for the Buckeyes, entering the Big Ten Tournament.

Pohl led the comeback in a 7-4 victory at Youngstown State last Tuesday with a grand slam in the fourth inning. He hit two home runs in a 13-11 victory over Purdue on Saturday, and that included a three-run shot that provided the lead for good.

What’s up with him?

“We’ve been really working, poking on him, to stay level and not getting loopy,’’ Beals said. “We want him to be a little more direct. By doing that he’s creating the positive spin on the ball that makes it travel. You see him foul ball, foul ball down the first base line and that’s from dropping the barrel and not being direct to the point. When he drops that barrel he rips it through the zone and that gets him to roll over it.’’

Beals said there have been different approaches in working with Pohl, but the message has been the same.

“We’ve always been working and you never know when it clicks,’’ he said. “The information isn’t any different than it has been. You see it in different ways and keep saying it and try to figure out what makes it click in a guy.’’

Sophomore catcher Dillon Dingler is another player that has been warming up. His season was stalled during the guts of non-conference play after having hand surgery to remove the hamate bone.

“Another thing I’m excited about is you can look over the last couple of weeks and see that Dillon Dingler is getting healthy,’’ Beals said. “I’ve moved him into the three-hole. He also has some foot speed that helps to be out in front of Cherry and Pohl. I’m not sure he’s 100 percent, but he’s getting healthy.’’ 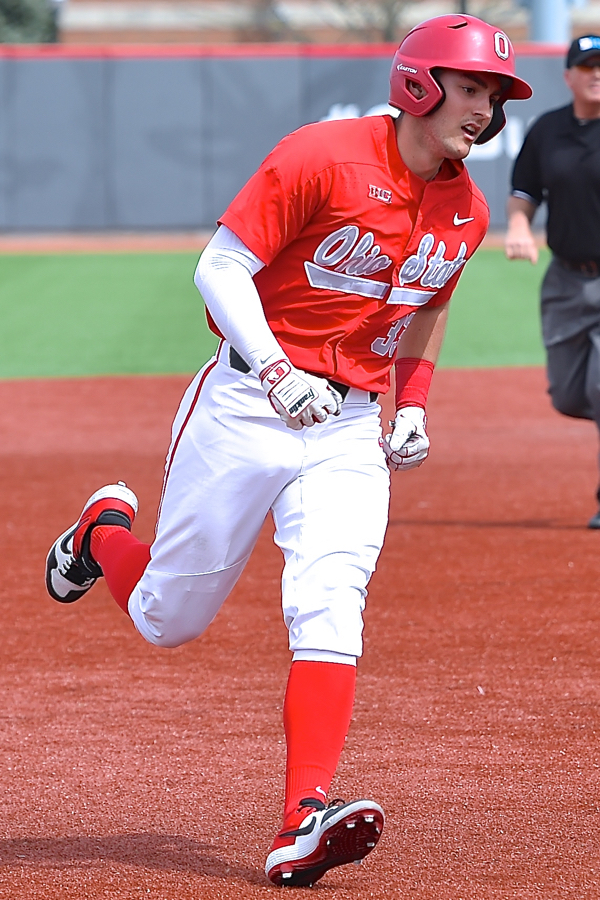 Dom Canzone was the only Buckeye voted to the All-Big Ten first team. He was second in league hitting with a .357 average and had 15 home runs. (Press Pros File Photos)