Buckeyes Get Into B1G Tourn. With Help From Minnesota

Three-run homer by Conner Pohl, and an iron man relief job by junior Andrew Magno were the catalysts for the Buckeyes’ game three win over Purdue.

West LaFayette, Indiana – The baseball had just settled into the pocket of Ohio State left fielder Brady Cherry’s glove for the final out when pitcher Andrew Magno gave an emphatic double fist pump and performed an aerial high five with catcher Dillon Dingler just in front of the mound.

It was as though the Buckeyes had won something pretty important, but in actuality they didn’t know whether it was the end of their season or the beginning of the second season that is called the Big Ten tournament.

Some 3 ½ hours later, Magno & Company celebrated in earnest on the team’s charter bus on Interstate 70 somewhere between the Indiana border and Dayton. Motorists following too closely might have sworn they saw the vehicle rocking back and forth.

Ohio State hit six home runs and had 23 hits total on a blustery, scorching 88-degree day that was homemade for hitters in a 13-11 victory over Purdue on Sunday at Alexander Field.

But it wasn’t until bitter rival Minnesota, of all people, did the Buckeyes a favor by hanging on to defeat Northwestern 6-5 in Evanston to get them into the tournament as the seventh seed.

The season would have been over with a win by the Wildcats.

“They were watching that game on their computers the last five innings,’’ coach Greg Beals said of his players. “Obviously, it was a pretty strong reaction from them after the final out.’’

The next step is a date with second-seeded Michigan in the first round of the conference tournament at 1 p.m. Wednesday at TD Ameritrade Park in Omaha.

It wasn’t as though the Buckeyes (31-24, 12-12) got in through the service entrance. They had to win five of their final six conference games just to get a chance to play on.

Right fielder Dominic Canzone kept talking about his teammates and how they put themselves on the line to get this far.

“We did everything we could, and I’m just proud of these guys,’’ he said. “They just ground it out. They just battled all the way. Everybody stepped up. It was about being a team and being ready for the moment.’’ 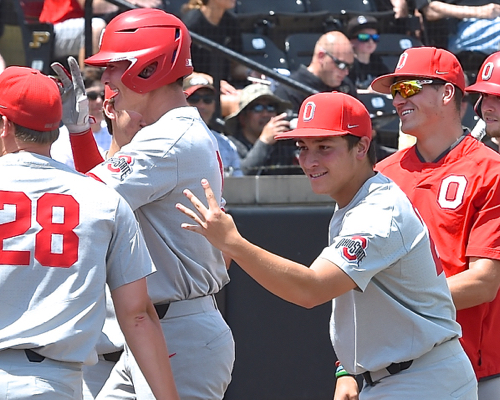 Andrew Magno holds up four fingers in the first inning after the fourth home run was hit by  Zach Dezenzo and the Buckeyes.

One had a feeling it was going to be a wacky final day of the regular season with 20 mile per hour winds blowing out to center field and the heat. Any baseball hit in the air with any kind of authority looked to be dangerous.

The difference proved to be a three-run homer in the sixth inning by first baseman Conner Pohl off left-hander Matt Moore for a 12-9 lead. Matt Carpenter led off the inning by reaching on an error by the second baseman and Dingler followed with a single to center.

“They brought that lefty in, and I saw him three times on Thursday,’’ Pohl said. “He struck me out three times. I knew what he was doing and what he was throwing. He got down 2-and-0 and I thought he’d come in with a fastball, and I just sat on it.’’

Pohl entered the series with two home runs. He left with five.

What is up with the power surge?

“It was barreling up balls and not trying to over-swing every time up,’’ he said. “I think more than anything what we did just shows how good we are as a team. We had only one error. They put up 10 hits, but we put up 23. That shows what we’re capable of doing.’’

Brooks had pitched 11 innings all season in returning from Tommy John surgery and looked out of his element in giving up a two-run shot to Dingler and solos by Cherry, Pohl and Zach Dezenzo. 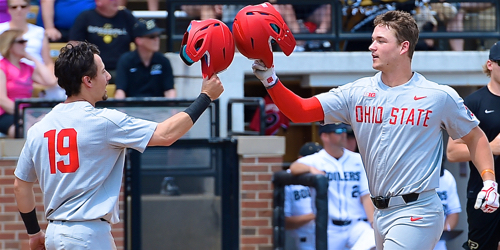 Two run homer for Dillon Dingler who started the home run rally in the first inning.

There were nine hits in all – two by Carpenter – as the Buckeyes took an 8-0 lead.

Ah, but this team loves to tease its followers with high drama and, just like that, Purdue (20-34, 7-16) mashed starter Griffan Smith for seven runs in the fourth to cut the deficit to 9-8.

A run-scoring double by Bryce Bonner in the fifth gave the Boilermakers a tie at 9.

At that point, the body language for Ohio State translated to shock. They looked like zombies.

“We went through about an inning and a half where we got punched in the mouth and were staggered,’’ Beals said. “The coaches said, ‘Hey, we’ve got to get them up.’ Coach (Matt) Angle got them up and said, ‘Hey, men, it’s 9-9 and we’ve got a four-inning ballgame, so let’s play them four innings straight up.’ So we did.’’ 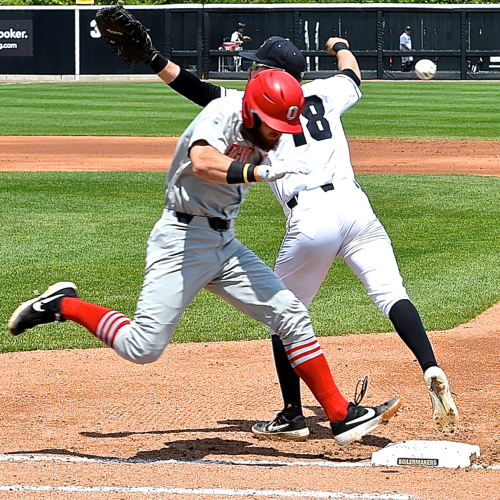 Ridge Winand beats the throw to first base on a Purdue error.

Canzone said the players got the message.

“A bunch of guys, including myself, talked about having positive energy and not thinking negatively that we were going to get out of this and we’re going to start hitting again,’’ he said. “That was a huge, huge homer by Pohl that gave us a three-run lead.’’

Right before your very eyes was a team that took another step up the ladder in its development.

Everyone, though, looked like he was ready for a shower and a lot of cold water and sports drinks.

“A game like this takes years off your life,’’ Beals said. “It was a must-win game and kept us in contention. One thing I’m proud of is our guys were on a mission and they took care of business this weekend. We had opportunities at other points of the year, but this weekend our guys played so well.’’

It helped that the Buckeyes had the indefatigable Magno coming out of the bullpen. He came on with one out and five runs already having scored in the fourth and finished the game.

Magno had a line that read like a blue chip stock, but all those crooked numbers are not good for a pitcher. He gave up four hits, six walks and three runs in 5 1/3 innings.

But how many other relievers in the country – high school, college or professional – can throw 104 pitches?

Answer: The list begins and ends with Andrew Magno. 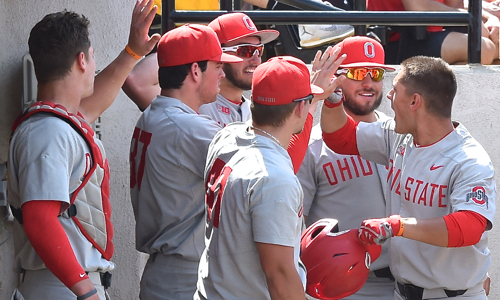 Brent Todys continued to add to his home run total.

“I knew out of the gate that I was going to be the first reliever out there,’’ he said. “I think that played with me a little bit and I tried to be too perfect at first, but I settled in the last three innings.’’

The conditions were hell for a pitcher.

Beals pretty much knew that he wasn’t going to take the ball away from Magno. The bullpen was fresh, but it was going to be a one-man show.

“We went to him early and that was kind of the game plan,’’ he said. “Mags has been extended before and we felt it was time to put our best go-to guy in the game. Magno was a big story today.’’

So was the offense. Five of the first six batters in the order had three hits and the six- and eight-hole batters each had two.

“This was one of the craziest games I’ve ever played in,’’ he said. “There were just a lot of emotions running and it was a heck of a battle. That was a long one. That’s what we’ve been working on all season and talking about all season – believing in one another and being there for each other. We battled every single at bat and obviously Andrew Magno finished it.’’ 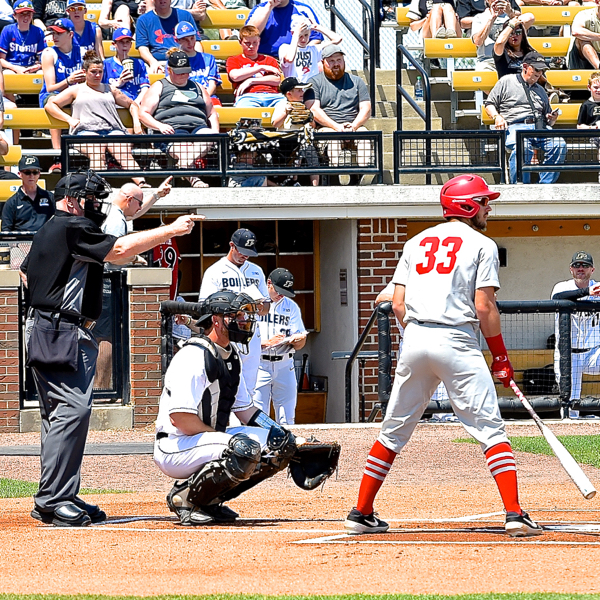 Start of the game… Dom Canzone steps up to bat not knowing the destiny of his, or the Buckeyes’ season. Canzone is batting .357 and went 3-for-6 to extend his on-base streak to 51 games.  That ties the mark previously held by Nick Swisher.