Not to be patronizing for the sake of one particular day, but like most of us must admit…I wouldn’t be who I am without my ‘Mom’. 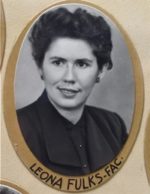 My mother, Leona Fulks, as she appeared as a member of the Fairland High School faculty in 1956.

I cannot write too much about my mom on ‘Mother’s Day’.   It would not be appropriate.  She wouldn’t want it, because my mom, now 91 years young, has never been one about attention or self-promotion.  And frankly, today she won’t want flowers or candy, just a visit and a few minutes to know…that she still matters.

But on this particular Mother’s Day I write because I still marvel at someone, who in the twilight of her life, still motivates me on a daily basis because of the example I learned by living with her during all my formative years.  It’s the point of motherhood – to nurture, protect, and teach.

There’s nothing particularly fancy about Leona Fulks…never has been.  And yet, my mom took delight in the simple fancies that nature afforded.  She delighted in growing roses for most her life, hence I pay tribute to her and all moms with that traditional image on today’s home page.  She will look at that photo and recognize a ‘Chrysler Imperial’ red rose, immediately.

But more importantly, she always shared her frugality, simplicity, and the importance of saving, investing, patience, and living to appreciate that which you had.  She had nothing against wishing for more, but she was always quick to remind that others had less.

She worked like no other human I’ve ever witnessed.  For 36 years she taught in the public schools, then came home at the end of the day to cook and care for my sister and me, then can, freeze, and with the help of my dad prepare for another day.  Because they were born during the Great Depression, they never discounted the possibility that it could happen again.  And if it did, they were going to be prepared.

There was always extra food in the basement, and she kept a chest freezer for years, stuffed to the lid with frozen goods from the yearly garden…beans, corn, peaches and berries of the season.

They planned financially like few people I’ve ever known.  When my dad finally passed away in a nursing home eight years ago, he paid every cent of his care bill out of pocket and from a personal insurance policy.  No Medi-Care.  Oh no.  HEAVENS NO.   It was his dying victory to know that he and Mom had paid their own way.  Don’t be a burden on the government, or anyone else. 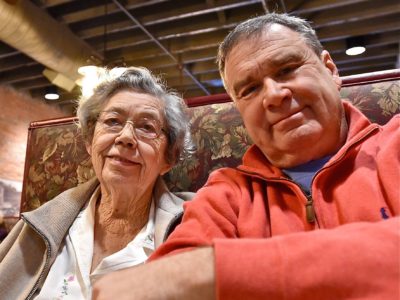 And yet, there was no one in the community with a better sense of when a neighbor needed help…or a kid in school didn’t have as much as others.  Mom somehow knew who those people were, and took it upon herself to look out for them, as well.

I’m nothing really like my mom…not nearly as committed to worrying about tomorrow, because I grew up in a different time, in an age of excess and waste.

But she taught me how to work, and that the person who does work, takes risks, and is patient to see a risk through is the person who will one day be happy when others have their the back against the wall – the lesson of the ant and the grasshopper.  She always believed that nature set the best example for everyone, if they only took the time to see.

And, she taught me character, and the importance of faith in things not seen, and yet to come.  Perseverance has been her life’s mantra.  Run the good race and trust in the finish.

She no longer lives on her own, and there are days when she struggles to figure things out – people, places, days of the week, and seasons.  But on her good days she’s as good as she ever was, as Toby Keith once sung.  And I’m so happy she has those days.