The Butler (Aviators) Did It, Again

Tipp City — On Monday, the Tippecanoe Red Devils and Butler Aviators pounded out 26 hits in the Aviators’ 10-7 victory.

On Tuesday, the Red Devils and Aviators pounded the strike zone. The offensive display the day before turned into a pitchers’ duel a day later, albeit with the same result. Butler claimed a season sweep of Tipp with a 2-1 victory at Clawson Field to remain undefeated in the Greater Western Ohio Conference.

Butler pushed across the winning run with two outs in the top of the seventh. Cooper Harestad singled and with shortstop Troy Taylor ranging toward second, the ball rolled under Taylor’s glove and into center field. The single allowed Mike Masters to score from second for the 2-1 lead.

Masters, meanwhile, reached when his hard line drive bounced off the glove of Tipp pitcher Ian Yunker – who just enough time to protect himself – and ricocheted toward third base. Masters beat the throw for the infield single.

It was that kind of game for the Red Devils, who saw most of the bounces go against them. Tipp committed nine errors in the two-game series, including four on Tuesday.

“Nine errors in two games against those guys. (Monday) we gave them five runs and (Tuesday) we gave them both runs,” Tipp coach Bruce Cahill said. “We make some mental mistakes. We do things that get us in trouble and you just can’t do that. I guess the good thing with our younger guys – our sophomores and freshmen – is you hope they get that out of the way and get a little better before they become juniors.” 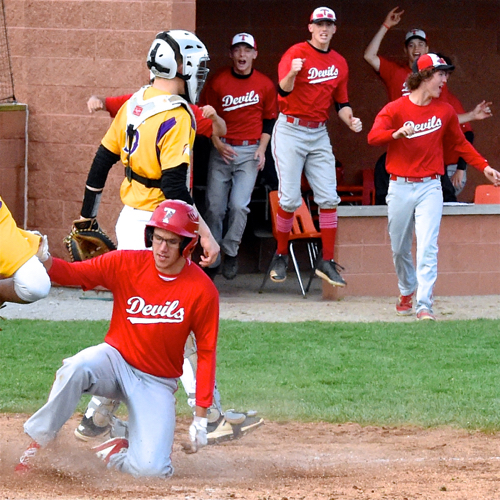 Butler improved to 16-4 overall and 11-0 in the GWOC American North Division. Butler has four league games remaining with West Carrollton on Thursday, Troy on Monday and Tuesday and Trotwood-Madison on April 9.

Troy (14-4 overall, 9-3 GWOC) still has a shot at the division title, but needs help. The Aviators can clinch a share of the title with a win in its next four games.

“We’ve got work to do yet. It’s not over by any means,” Butler coach Trent Dues said. “We’re playing good baseball. We can’t get away with not showing up every day. They know their roles and they’re playing well.”

On Tuesday, Butler’s Braeden Norman and Cody Borchers combined to hold Tipp (11-9 overall, 9-4 GWOC) to one run and four hits. Norman got the start and allowed two hits, striking out three and walking two. He overcame a brief bout of wildness to start the game, but settled in for three solid innings. 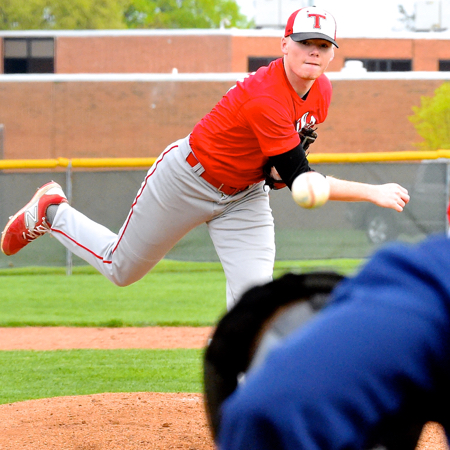 Two of Norman’s first four pitches sailed over home plate to the backstop and he walked Tipp’s lead-off batter, Cade Beam, on four straight pitches. Norman then unleashed 11 straight strikes. Tipp put two runners on in the inning with walks, but Butler Harestad ended the threat throwing out Beam attempting to steal third.

Tipp stranded one runner in each of the first six innings.

The Red Devils tied the game 1-1 in the bottom of the sixth when CJ Miller drew a lead-off walk. Nolan Mader’s one-out single took a wicked hop on the infield grass and screamed past first base and into right field. Miller scored when the throw from right field flew high over third base, allowing Mader to advance to second.

Butler ran a pick-off play at second to erase Mader. Borchers turned and threw the ball to a teammate near second. A pair of Aviators – pretending there was an overthrow – sprinted into center field in pursuit of the phantom overthrow. Mader took off but was tagged out halfway to third.

“We told them (Monday) they run that play every year,” Cahill said. “They ran that play last year and we didn’t fall for it.  Why would you go if you don’t see the ball? That’s just being unaware. I just told him two pitches before that if there’s a pick-off play stay at second.”

The loss spoiled another strong effort by Yunker (4-4). He allowed three hits, two runs (one earned), struck out 10 and walked two. Yunker struck out seven of 13 batters between the third and sixth innings. In the fourth inning he threw six pitches – all strikes – for a pair of line-drive outs and a strikeout. 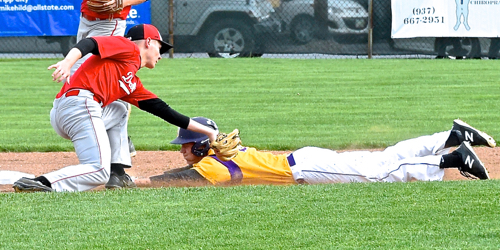 Butler’s Cam Miller stretches toward second as Tipp shortstop Troy Taylor applies the tag … and was safe at second.

“That was a great game. It was an absolute pitchers duel,” Dues said. “It’s one of those where a mistake here and there is going to decide it.  In close games you hate to see it decided like that.”

Cahill said Yunker lost a similar game 1-0 during a trip to Florida. The Red Devils have two aces in Yunker and Kenten Egbert, but often struggle giving them support with a team average of .311. Tipp lost 2-1 to Tecumseh on Saturday managing three hits against what Cahill said was a pitcher who topped out at 65 mph.

“We’re just scuffling right now. We have to own what we are,” Cahill said. “We have to figure out a way to put wins together going forward and get ready for the tournament. We can’t take anybody for granted. We lost a couple games this year we had no business losing.

“We knew going into the year we didn’t have the offensive firepower. Truthfully we’ve only had probably three games where we hit well. Then when you don’t hit, we’ve had errors and base running mistakes. You can’t do that and win games.  But if we get on a role in the tournament with two good pitchers, I think we can make a run.”

Butler successfully pulled off a trick play in the sixth inning, faking an errant pick-off throw into center field … and tagging out the runner halfway to third.

“It was a good team win,” Dues said. “It definitely wasn’t an offensive show at all. It was a good baseball game. (Yunker) is a good pitcher. You get your curve over like that you have a chance to be devastating. … It seems like it’s a different guy for us every night. Our pitching has been doing well, we’ve been playing defense and getting enough offense. It’s a nice combination.” 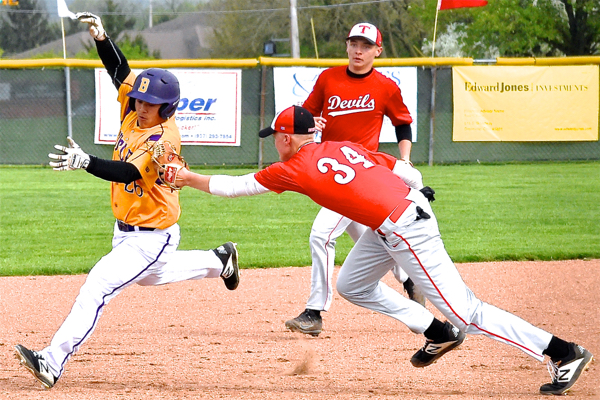 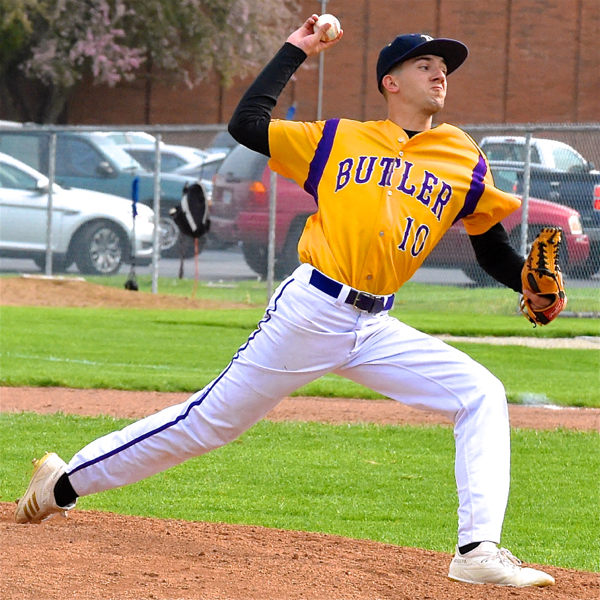