Iowa senior Cole McDonald dazzled in Friday night’s 4-2 opening win, but to meet him is to admire his patience to improve and a solid plan for a future outside of baseball.

Columbus – Once a year I like to profile a player in a different uniform, a guy that makes you stand up and take notice…even when his efforts result in a less-than-desired outcome for the home team.

Iowa’s Cole McDonald is exactly that guy, having pitched the Hawkeyes to a 4-2 Friday night win over the Buckeyes, having stymied the Buckeyes with a 2-run, 6-hit performance over eight innings.  He improved his record to 4-3 and dropped his ERA to 3.66.

“He’s really been good for us over the course of the Big Ten season,”  said Iowa coach Rick Heller prior to Saturday’s game at Bill Davis Stadium.  “He works hard, he has four good pitches, and impressively he’s able to execute all four.  Last night his slider wasn’t as good as usual, but he did well enough with the other three to be successful.”

Typical of many Big Ten baseball players, McDonald comes from a small town, small school, a graduating class of 85, and a background of hard work and commitment.

“North Hampton, Iowa,”  he smiled.  “Very small, and really, there were only 85 in my graduating class.”

But apparently they play baseball in North Hampton, and McDonald came to the Hawkeyes and promptly won four games as a freshman in 2016.

He slipped to 2-4 in ’17, improved to 3-2 last year, and through Friday night’s game has now won 13 games in 40 total starts.  Obviously, he’s pitched in some bad luck, and with the patience to pitch in games with a lot of no-decisions. 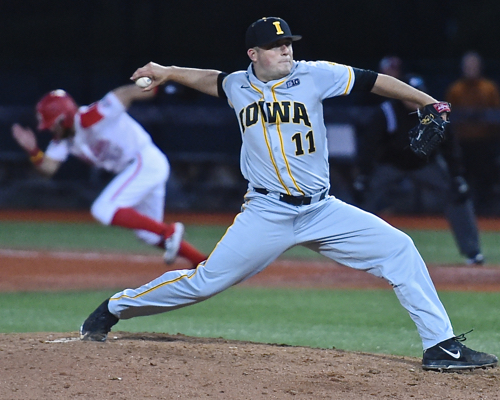 Iowa right-hander Cole McDonald pitched eight plus innings Friday for his 4th win of the season.

“It doesn’t bother him,”  said associate head coach Marty Sutherland.  “Just a guy from a small town that works his stones off.”

And smiles ear to ear at the mention of admiration for a job well done.

“Thank you,” he said with a grin, talking about his Friday start.  “I was fortunate to have most of my pitches working, but my changeup was the big pitch for me.  They’re a very aggressive-swinging bunch, so I tried to throw a lot of first-pitch changes.”

It did the trick, even drawing praise from Ohio State coach Greg Beals.

“Give McDonald his due,” Beals said. “He’s a senior and he’s been around the block. He used all four of his pitches tonight and did a good job of it. He kept us off balance in some cases and he had some of our guys guessing.”

He doesn’t throw 98, and knows there needs to be some preparation for life after college baseball.

“I’m a finance major at Iowa,”  McDonald declares.  “I’ll probably work in the financial planning field.  I guess I need to learn more about what ‘fiduciary’ means,”  he adds with a laugh.

But like our brief moment with Illinois’ Bren Spillane last year (now playing for the Reds with the Dayton Dragons), it’s heartening to meet a guy in another color uniform who exemplifies the proper priorities and character of so many who commit to playing any college sport.

Iowa’s Cole McDonald doesn’t disappoint…unless you were a Buckeye on Friday night!