A Horrible Start, A Glorious End…Bucks Split With Terps

Saturday was one of those days…as the Ohio State Buckeyes got drilled in the first game of their doubleheader with Maryland, 14-8, only to come back in the second and look dead for the first five innings…then rebound for a glorious finish – miraculous, actually – and win, 10-9, in 11 innings.

It was a LONG day – six hours and fifty nine minutes of baseball that saw the Buckeyes’ two most dependable starters struggle to even approach their previous effectiveness.  It was a day that saw five different hitters have multiple hit games…and a day that saw Dom Canzone collect his 100th career RBI and his 200th career hit.

But it wasn’t Garrett Burhenn’s day in game one. Struggling to get the ball down in the strike zone in the bottom of the first he gave up two runs on a pair of hits, a walk, and a wild pitch and looked anything but the Garrett Burhenn of his nine previous starts.

In the top of the second shortstop Zach Dezenzo provided a brief moment of atonement, slugging his seventh home run of the year to cut that deficit in half.

But in the bottom of the second Maryland added a run on a pair of hits and a passed ball, restoring that two-run lead.

It looked very good in the top of the third when the Buckeyes scored five runs on four hits to actually take a 6-3 lead.

That lead disappeared quickly, as Maryland slammed the ball for three runs in the fourth, added two more in the fifth, and one in the sixth before Greg Beals acknowledged that his freshman starter had had enough – 9 runs earned, on 14 hits in five innings of work. 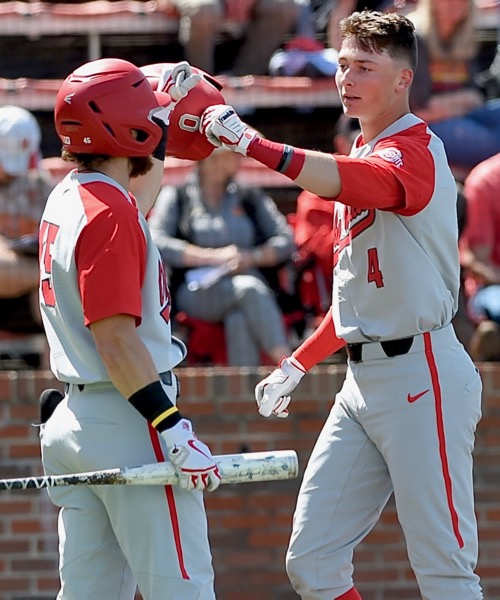 Big day for Dezenzo…Zach Dezenzo was one of five Buckeyes with multiple hit games in the doubleheader, including a pair of home runs in game one.

Will Pfennig came on to relieve, allowing one of three inherited runners to score, then struck out the side to leave the deficit at 9-6. However, Pfennig’s day was about to get worse.

Maryland hammered the Mason freshman for five runs on five hits over the next two innings to take a commanding 14-6 lead, before the Buckeyes could answer with a pair of inconsequential runs in the top of the ninth. The final: Maryland 14, Ohio State 8, as Maryland set a season’s record with 20 hits, squandering a Buckeye offensive effort when 8 runs should have been enough to win a ballgame.

Impressively, Maryland’s top three hitters, AJ Lee, Randy Bednar, and Taylor Wright all had four hits, and their top four hitters reached base 16 times in the game. All this from a team that entered the game with a composite batting average of .235!

As things started out…the only thing that seemed to change in the second game was Maryland switching from black to red jerseys.

However, the Buckeyes did grab a quick lead with an ominous beginning as Dom Canzone led off the first with a home run to right, his 11th, and two hitters later Brady Cherry hit his 10th, a flaired shot that was wind-aided down the right field line. 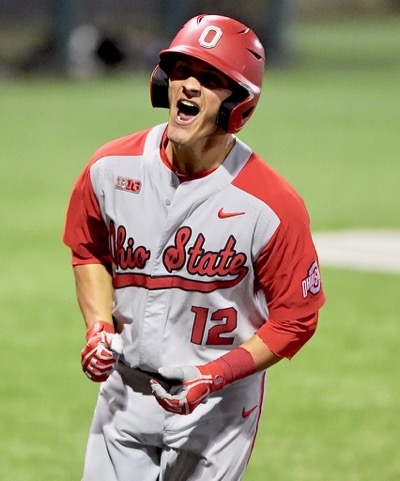 Brent Todys celebrates a pair of home runs in game two, including his shot in the 11th that won the game.

It was famine and feast for Seth Lonsway, who walked bases full in the first inning, then struck out the side as he seemed to settle into a rhythm.

But in the second the walks continued to follow him, plus five base hits, highlighted by first baseman Maxwell Costes, who torched him with a towering home run over the left field fence to erase the 2-0 lead and send Maryland ahead, 5-2.

The Terms added two more in the third on a pair of hits, a walk, and a wild pitch…7-2, as Lonsway’s pitch count reached 90 and the day indeed seemed lost.

The Buckeyes added a run in the top of the fourth on a hit batsman (Dillon Dingler) and a two-out double by Zach Dezenzo. But Lonsway’s day was done after three innings – 102 pitches, 7 runs on 9 hits (all earned), 7 strikeouts and 4 walks.

TJ Brock came on for the bottom of the fourth….and impressively retired the side with 14 pitches and a strikeout. But his dominance was short-lived as Maryland’s Caleb Walls greeted him in the bottom of the fifth with a solo homer to right to make it 8-3. The Buckeyes added a run in the sixth on an RBI single by Dezenzo, his fifth hit of the day, to make it 8-4.

Brock dug in, blanking the Terps in the sixth and seventh innings (1 run, 2 hits, and 3 strikeouts), setting the stage for the improbable finish, starting in the eighth inning.

Maryland starter Zach Thompson sat down after seven good innings, turning the game’s outcome over to the bullpen in the eighth. But Ohio State scored four times on a pair of Terps relievers – a walk to Dingler and a two-run homer to left by Brent Todys, his fifth of the year. Another walk, a pinch single by Scottie Seymour, and a two-run double by Canzone tied the score at 8-8. 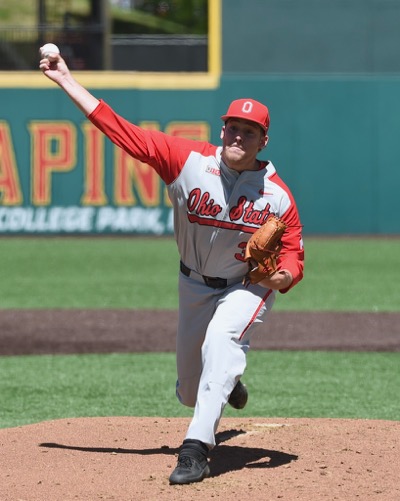 Garrett Burhenn finally had a bad start, but still got through five innings and a hundred pitches.

Andrew Magno came on for the bottom of the eighth and promptly gave the lead back to Maryland on a pair of hits and a mix-up between Magno and Conner Pohl on a slug bunt along the first base line. Maryland took a 9-8 lead to the top of the ninth.

Conner Pohl put down a perfect bunt along the third base line off Maryland reliever John Murphy and beat it out at first base, an overthrow allowing him to advance to second. Nolan Clegg ran for him and promptly scored on another hit by Todys, an RBI single up the middle…9-9!

Magno came out for the ninth and set Maryland down in 1-2-3 order. But the Buckeyes couldn’t score in the top of the tenth, stranding a pair of leadoff walks as Murphy struck out the next three hitters.

Ironically, Magno returned the exact favor in the bottom of the tenth after Maryland loaded the bases on a pair of base hits and a walk. It gave the Bucks’ left-hander eight K’s in just three innings as a Maryland radar gun behind home plate clocked his best fastball at 94 mph.

Murphy came back out for the 11th and quickly retired the first two Buckeye hitters, Marcus Ernst and Dingler on a strikeout and a ground ball. It brought Todys to the plate with two outs and no one on.

“I fouled off his fastball and he had fooled me with the curve on the previous at bat,” said Todys later. “I was looking for the curve.”

He got it and lined it over the left field wall for his second homer of the game, his sixth of the year, and the Buckeyes suddenly had a 10-9 lead.

This time Magno made it stand, striking out the side again in the bottom of the 11th, for his ninth, tenth, and eleventh punch outs in his four innings of work.

“That was some good %$^,” said Greg Beals afterwards, letting his tongue slip in his excitement on Buckeye radio. “I’d never seen a reliever strike out 11 hitters in a four-inning outing.” 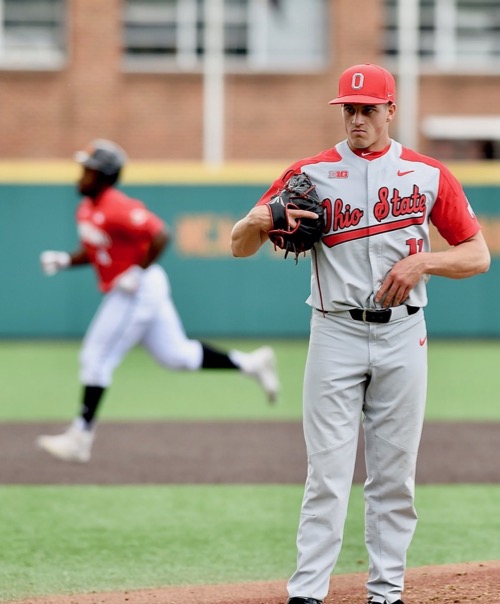 Maryland’s Maxwell Costes circles the bases behind OSU’s Seth Lonsway after his three run homer in the second inning of game two.

But it amounted to a glorious finish for what started out to be a horrible day – a day of suspect starting pitching, squandered offense, and a feeling of impending doom after Seth Lonsway struggled to turn things around at the outset of the second game. Magno, who got the win (his 3rd, 3-3) shook his head and just smiled over the irony of how the day finished.

“I had no idea I had 11 strikeouts,” he said. “You gotta’ give credit to TJ (Brock) for what he was able to do, too. I was just trying to compete, to do what I could. It kinda’ sucked that I gave up the run in the eighth to let them retake the lead, but I threw some quality pitches and they just hit a couple of them into no-man’s land. My team picked me up after that so I was happy to contribute – happy to help our pitching staff, and I’ll be ready tomorrow if they need me.”

Greg Beals looked like a man who needed a stiff drink and a cigarette after the game – a long day of baseball that at times looked like a team in retrograde progression, fighting for its life, if not its season.

“The first game they put it on us,” said Beals. “Then we don’t get a quality start from Lonsway and we’re in a hole for game two, also. But then we got four solid innings out of TJ, and four BIG innings out of Magno. You talk about resilience? They get that run in the eighth off that nubber in the infield to take the league…Mags just kept pitching, kept attacking them, and 11 punch outs in four innings. I don’t know if I’ve ever seen that before.”

And how do you explain the struggles of Burhenn and Lonsway, after pitching so well a week ago against a great Michigan team?

“Plus, this place is a little daunting to pitch in because the wind blew out all day and it’s a short ballpark. It’s short to center field (only about 365 feet) and our guys didn’t look like they were comfortable pitching here. But the relievers…they came in and attacked and gave us a chance to win. We did a lot of little things today, and we had some guys who had good days offensively (Erwin, Cherry, Dezenzo, Canzone and Todys).  And you can’t overlook the pinch hit that Scottie Seymour had for us in the second game. Malik Jones comes in and scores from first base as a pinch runner. And some of the buttons we pushed worked for us today. It doesn’t always happen like that.”

Their youth and inconsistency showed at times, a team that had looked so good against Michigan just a week only to strain against a team batting .235 for year and pitching at nearly a half run more per game.

But as Beals emphasizes over and over…their character, and a little brotherhood – mutual support – and that which fueled their comeback in game two came to the surface at just the right time.

It was a horrible start, and a glorious end, and they still a chance to win the series tomorrow. 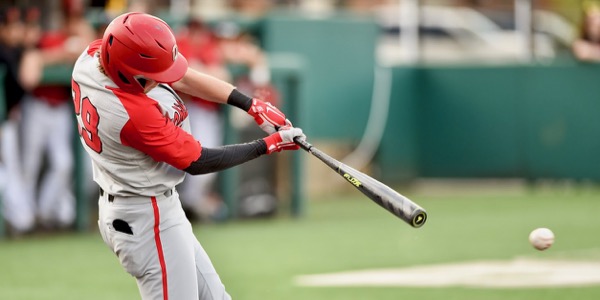 Freshman Nick Erwin had a three-hit first game and was on base five time in the doubleheader. 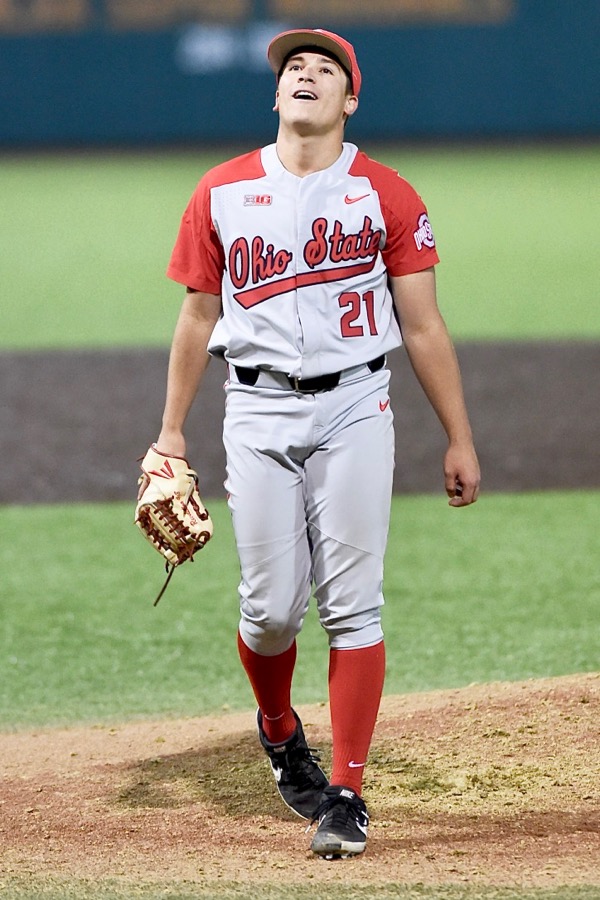 Reliever Andrew Magno enjoys the moment after striking out 11 in four innings, including the side in the bottom of the 11th. (Press Pros Feature Photos by Sonny Fulks)