Buckeyes In Maryland: But It’s Not All Baseball….

What do you do in the Maryland countryside when the baseball game’s rained out?  Well, a little history in this case, and a side trip Friday to the Antietam National Battlefield.

College Park, Maryland – It’s something that we’d planned for several weeks – had even talked about for months.

Buckeye Diamond Club members Bill Wells, Tom Randall, and Terry Peake and I had talked about a day trip during this weekend’s baseball schedule between the Ohio State Buckeyes and the Maryland Terrapins.

“Hey, is there any chance we might slip off to one of the Civil War parks nearby in Maryland or Virginia?”  asked Wells back in March.  “I’ve always wanted to go and you probably know your way around those places.”

And, of course, I do, having worked with Gettysburg Magazine for nearly twenty years as photo editor and a contributing writer.

“Antietam is the closest to College Park (where we’re staying),”  I told Wells.  “It’s about an hour up the interstate.  Randall (former baseball coach at Kenton Ridge High School), and Peake, a retired state patrolman, readily offered their company and companionship.  And Friday’s weather made the trip not only doable, but necessary.  They’re having storms and tornado threats on the eastern shore this weekend so we badly needed a diversion.  Antietam fit the bill.

If you’re never been there, the Maryland countryside and Sharpsburg, Maryland, is one of the loveliest of all the national military battlefield parks.  Site of the famous battle of Antietam in September of 1862, the nearly 30 square miles of battlefield is largely the same as it was back then when Robert E. Lee’s Confederate army tangled with Federal army under George B. McClellan…in what has since been called the bloodiest single day of the Civil War.  Combined, the two armies lost 23,000 men wounded and killed in about twelve hours fighting.

Unlike Gettysburg, about an hour up route 15, in southern Pennsylvania, or Manassas, about an hour southeast, in Virginia, the Antietam landscaped is still very country and lacks the commercialization you find at those two more urbanized battleparks.  The farms and the buildings that were here in 1862 are still here…and the battle itself is easy to understand as the landscape is open and relatively unchanged.  The US Park Service has done a wonderful job in keeping it that way. 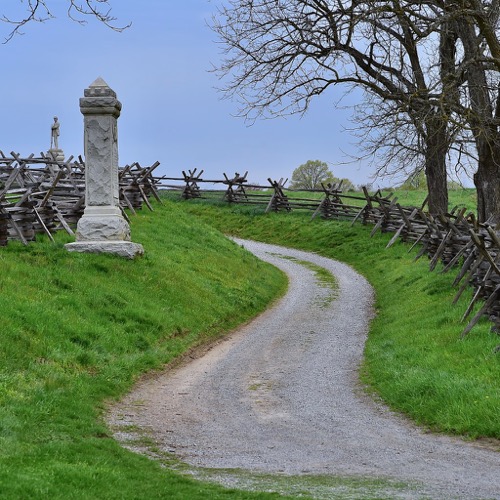 The ‘Sunken Road’ which saw thousands of casualties at the time of battle, is still a poignant reminder of Antietam’s history.

Nearly a million people find their way to tiny Sharpsburg on a yearly basis to walk the fields, take photographs, and just soak in the history and beauty of the Maryland countryside.

“If I had to pick one battlefield that I can see and appreciate it all in one day it would be Antietam,”  says 94-year-old Park Service historian emeritus Ed Bearrs, who still travels about 200 days a year interpreting Antietam, Gettysburg, Manassas, Shiloh, Vicksburg, and the other notable venues of the Civil War.

And for Wells, Randall, and Peake, the sheer beauty, and yet carnage associated with the landscape of Antietam, was enough to make them pause and consider the sacrifice of those who fought there now 157 years ago.  And it’s easy to do because regimental historians of the Civil War kept such accurate accounts of the battles as they happened.  And shortly thereafter, in 1895, many of the battlefields were designated as national parks and monuments were erected by veterans groups themselves, who remembered precisely where they were and what they had done just thirty years prior. 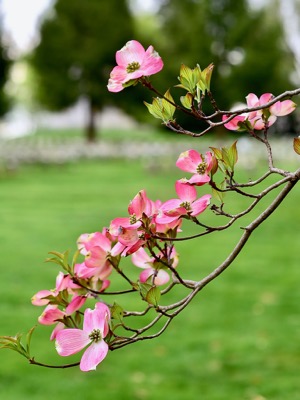 Spring dogwoods grace the beauty of Antietam this weekend…and the Maryland countryside.

At Antietam one of the best-known monuments is an actual building that was there at the time of the battle, the little white Dunker church that served as a field hospital for soldiers of both armies.

In addition, the well-known sunken road in the center of the Confederatel line (called Bloody Lane) is still very evident.

And on the south end of the battlefield, the famous bridge that spans Antietam Creek (Burnside’s bridge, named for Union general Ambrose Burnside) is a popular attraction, particularly for photographers.

We got there, saw the field, had lunch at the Battleview Restaurant, and were on the road back to College Park by the time the skies opened up and the rain came in a steady pour.  By 1 pm Friday’s game had been postponed, to be played as part of a Saturday doubleheader.

When the University of Maryland was added to the Big Ten five years ago I questioned, even scoffed its inclusion as being too far east and too removed from the culture of the Midwest.  But on a day like Friday, when there’s nothing else to do…I’ve never welcomed it more.  The pictures say it all.  Baseball has its hallowed ground in Cooperstown.

But in Maryland, its Antietam! 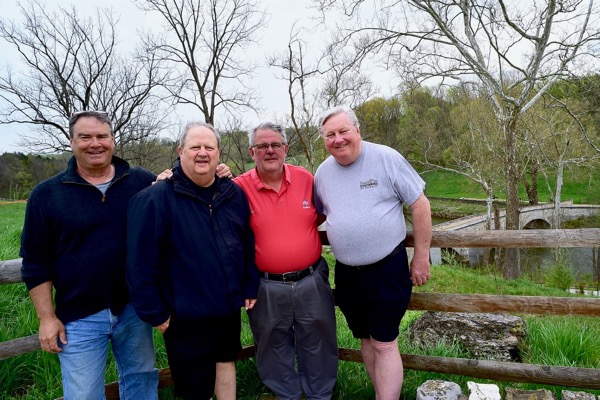 With Tom Randall, Bill Wells, and Terry Peake with Burnside’s Bridge in the background at Antietam National Battlefield Park. 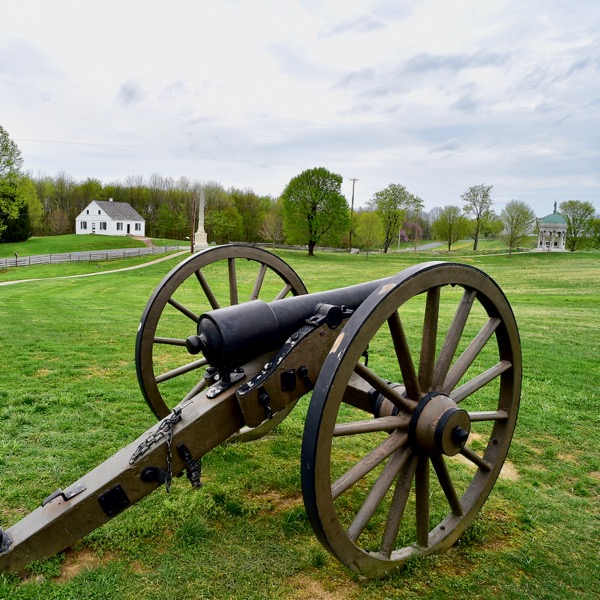 The 'Dunker' church (background), which once served as a house of worship and battlefield hosptial, is a famous, and identifiable, landmark on the Antietam battlefield. (Press Pros Feature Photos)