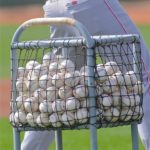 Columbus – Dominic Canzone woke up Tuesday knowing that he would bat lead off and play right field when Ohio State played a mid-week game against Xavier.

Baseball coaches everywhere use pencil to make out their lineups, but in this case Greg Beals might as well be using permanent marker again and again and yet again.

The same wasn’t true when senior Thomas Waning’s feet hit the bedroom floor. Oh, sure, he knew he would see the diamond at some point, but as a reliever.

But at approximately 3:30 p.m., a little more than three hours before the first pitch, pitching coach Mike Stafford told Waning that he would be making his first collegiate start.

And it would be against the team in which he started his career.

Freshman left-hander Mitch Milheim was scratched when he had to have an emergency appendectomy, and it was next man up.

Waning didn’t go five innings, but was awarded the victory at the scorekeeper’s discretion after giving up one hit, no runs and no walks and striking out five in the Buckeyes 8-5 decision over the Musketeers at Bill Davis Stadium.

It was the fifth win in six games for Ohio State (21-17) after it was swept at home by Northwestern.

Canzone was hardly a footnote going 3-for-5, which included a prodigious solo shot home run in the second inning, and making two diving catches.

His on-base streak has reached 34 games and hitting streak 11 games. Here is another crazy, crooked number: He is 53-for-140 in this stretch.

This hasn’t been a tip-top season for Waning. He came in with a 6.17 earned run average and had given up 18 hits and eight walks in 12 appearances covering 11 2/3 innings. Opponents were batting .360.

On this night, though, he was in command against the Musketeers (14-23) in getting the first 11 batters before Allbry Major singled to center with two out in the fourth. 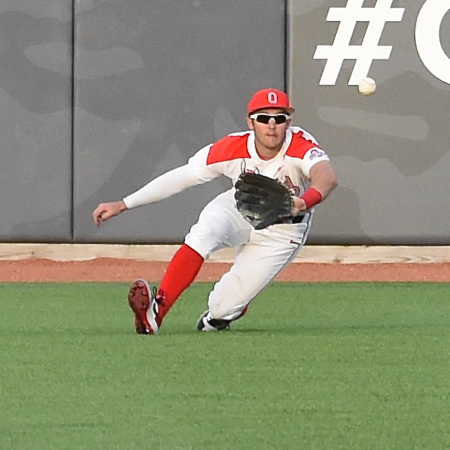 Waning  – “Luckily, I had good defense behind me. Dominic had two diving catches and (Kobie) Foppe and (Conner) Pohl picked me up on a ground ball up the middle.’’

Waning had no gripes about being taken out after 43 pitches.

“I was getting tired,’’ he said. “That’s the most I’ve pitched in my career here, and I was willing to pass the ball.’’

His last start came as a senior at Glen Lake High School in Maple City, Michigan, six long years ago.

What made the start on short notice more interesting was that Waning, a senior, has eliminated a windup coming out of the bullpen.

“I kind of just treated it with the same mindset as I would coming out of the bullpen,’’ he said. “It didn’t take long to warm up, as usual. I went into the game doing what I could.’’

There was no grudge against the Musketeers. Only one player remains from his time there. Head coach Billy O’Conner was an assistant during his stay.

“It’s always good to win as a team,’’ Waning said. “I don’t think there were any different emotions.’’

The game plan was simple: He’s a sinkerballer and tried to keep the ball low.

“I tried to get as many ground balls as I could,’’ Waning said. “Luckily, I had good defense behind me. Dominic had two diving catches and (Kobie) Foppe and (Conner) Pohl picked me up on a ground ball up the middle.’’

Beals knew it would be a bullpen game after hearing about Milheim. After Waning came Will Pfennig, Joe Gahm, Bayden Root, Brady Cherry, T.J. Brock and Andrew Magno.

“We got exactly what we needed from Thomas,’’ he said. “(Milheim) actually is in surgery having his appendix removed right now. It was kind of a fluke situation. He woke up this morning not feeling good. We diagnosed him and got him in emergency surgery.’’

Waning handled the situation like the senior that he is. 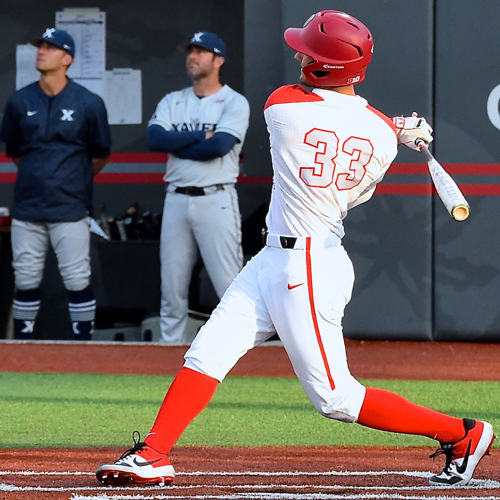 Dom Canzone was awarded the Big Ten offensive player of the week after he went 9-for-14 with four runs scored and four runs batted in during the series win over Michigan.

Ohio State looked as if it would run away in scoring two runs in the first on singles by Pohl and Brent Todys and three in the second on Canzone’s home run and a two-run homer by Cherry.

The lead expanded to 8-0 in the fourth.

But Cherry, an outfielder by trade who was being given another look-see as a reliever, gave up five runs on two hits and three walks in just two-thirds of an inning.

Magno struck out two in needing 10 pitches in the ninth to get his sixth save.

Beals said he left Cherry in a couple of pitches too long, and the result was a grand slam by shortstop Chris Givin.

“No doubt about it, Andrew is coming into himself,’’ he said of Magno. “He always has had great stuff. There has never been a question about Andrew Magno’s ability. He has gained it up here (pointing to his head), too. He has it going in the right direction. He trusts his stuff and trusts in himself.’’ 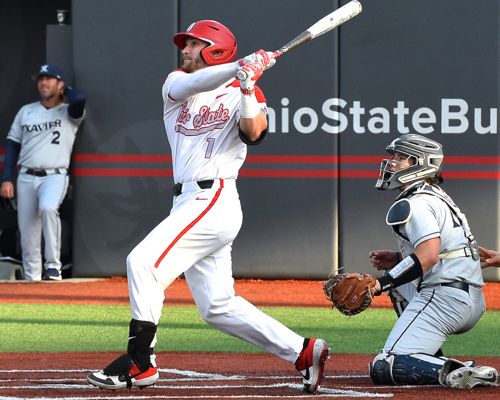 Brady Cherry’s homerun added to his total of nine.

The Big Ten made Canzone the offensive player of the week after he went 9-for-14 with four runs scored and four runs batted in during the series win over Michigan.

But he has been torrid for quite some time with 15 hits in his last 27 at bats. He has hiked his batting average to .368.

“Really, I’m thinking as little as possible and trusting my hands and my body of work,’’ Canzone said. “The biggest thing for me right now is to go along and try to help this team win games.’’

He was guessing on the first pitch from Nathan Berg and got what he wanted.

“I was sitting first pitch, slider or curve, and kind of got it right in my wheelhouse and let it fly,’’ Canzone said.

Now, teammates are grabbing for his white Easton speed model bat, and he doesn’t mind one bit. Pohl, Cherry and Ridge Winand have used it the most.

What about the on-base streak and his hitting in general?

“My swing is feeling good and I’m just trying to keep doing what I’m doing,’’ he said. “Streaks are streaks. I do everything each at bat and focus on doing whatever I can do for the team. I’ve definitely settled into the leadoff spot.’’

Beals wanted to talk about Canzone’s glove as much as his bat. He dove to his right after a long run to take away possible extra bases away from Natale Monastra in the third and ran in to make a diving grab of a liner hit by Conor Grammes in the fourth. 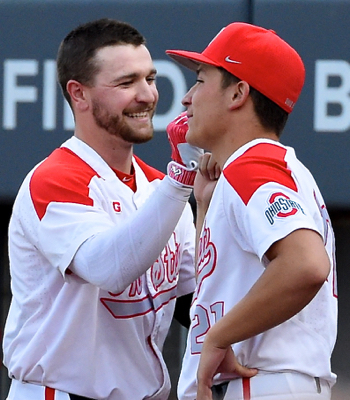 Cherry celebrates his homerun with Andrew Magno who gets save no. 6 for the season.

“You know what? To me that’s the hidden story,’’ he said. “On a night where the pitching staff is going to have to work and get stretched a little bit and get a whole staff kind of night, those are big outs. Balls are hit well and Dom tracks them down and gets two outs.’’

Waning said: “It’s always good to see when an outfielder gets dirty for you.’’

Really, though, no one can get Canzone out these days. The ball is rocketing off the bat.

“There are guys out there that have the ability to find the barrel of the bat, and certainly Dom is that guy,’’ Beals said. “Man, that home run he hit tonight was a bomb. That ball hit concrete, so it means it landed in the parking lot at Jack Nicklaus (Museum). You saw it bounce, so that means it caught concrete. It bounced 50 or 60 feet.’’

“I don’t know if Dom is a lead-off hitter, so to say, but what he does is represents our offense and our team at an elite level,’’ Beals said. “You get him right away and that means he leads our team in at bats.’’ 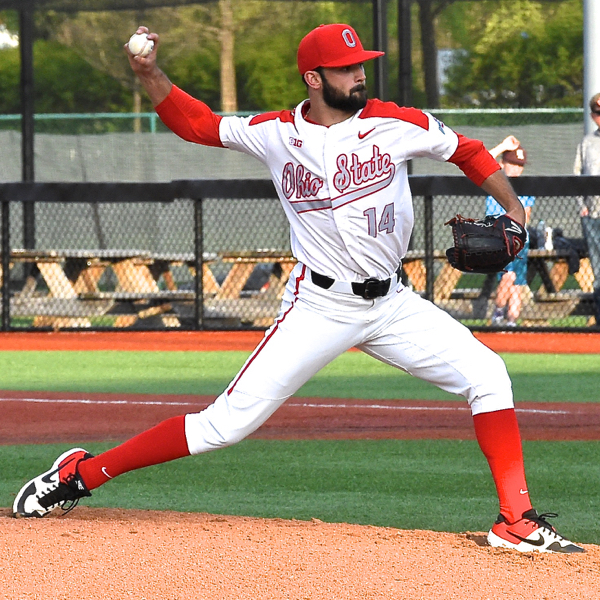 Thomas Waning was awarded the victory giving up one hit, no runs and no walks and striking out five in the Buckeyes 8-5 win over Xavier. (Press Pros Feature Photos By Julie McMaken Wright)