It wasn’t pretty thanks to a shaky defense, but Troy’s Cole Brogan gave the Trojans another solid outing and the offense out-slugged the Centerville Elks for a Tuesday win.

Troy – The Centerville Elks are one of the top teams … if not the best team … in the Dayton area. On Tuesday they were the second-best team in Troy.

But a win is a win. And on a sunny spring day that started with a 20-mph wind whipping straight into dead center at North Market Street Field, Troy’s 10-6 victory was a blast of confidence for the Trojans.

Troy (9-3) played well in its last three games prior to Tuesday but had one win to show for it. Troy lost at Springboro 9-8 last Thursday, lost to Xenia 7-5 last Friday and beat Miami East 4-1 on Monday.

“Three of our last four games – to me – have been against some of the best teams in Division I in Dayton,” Troy coach Ty Welker said of Springboro, Xenia and now Centerville. “To win this game … I’d like to have two out of three. But I’ll take one as opposed to none. If we’re fortunate enough to get to a sectional final those are the kind of teams we’re going to see. Those are the top dogs in the Dayton area. We like to think we’re with those guys. I don’t know if we have the athletes like a Hoffman. But we like our guys. We scrap and claw and fight. We’ll take it.”

Troy started clawing in the first inning after Centerville (11-5) jumped on Brogan for a 3-0 lead. The Elks put four straight runners on with two outs, highlighted by Hoffman’s two-run double.

The Trojans responded in the bottom of the first with five runs. Austin Kendall led off with a double. Jacob Adams and Braeden Snider loaded the bases with a single and a walk, respectively. Brogan walked to make it 3-1. Ethan West singled to make it 3-2. Matt Bigley walked to tie the score. Centerville starter Shea Hendrixson walked Weston Smith with two outs, making it 4-2, and was relieved by Connor Walch. Bigley scored on a wild pitch for the 5-2 lead. 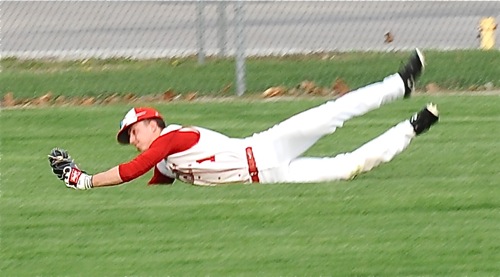 The old Troy try…centerfielder Weston Smith lays out to glove a would-be hit in Tuesday’s win at Market Street Field.

Brogan (4-0) allowed eight hits, walked one and struck out two. The Trojans’ defense struggled behind him with six errors. Troy entered the game with 10 errors in 11 games.

“It wasn’t the prettiest high school baseball game, I don’t think, but we did win,” Welker said. “That’s not the team we feel like we are. But Centerville is a good offensive team that’s going to put the ball in play. That’s a great baseball team and one of the best in Dayton.”

Troy scored nine runs in the first three innings to mount a 9-4 lead. After a rocky first, Brogan settled down. He sent the Elks down in order in the third and nearly did in the fourth except for one of those Troy errors.

After allowing six hits in the first two innings, the Elks didn’t get another hit until the sixth where Centerville left the bases loaded.

“That’s our best pitcher. He knows that. We all know that,” Welker said of Brogan. “He battled. Those are good hitters. I didn’t see a weakness in Centerville’s lineup. That’s pretty important that he can battle. We want him to see the best. He’s our Tuesday guy. We were ready to throw him.” 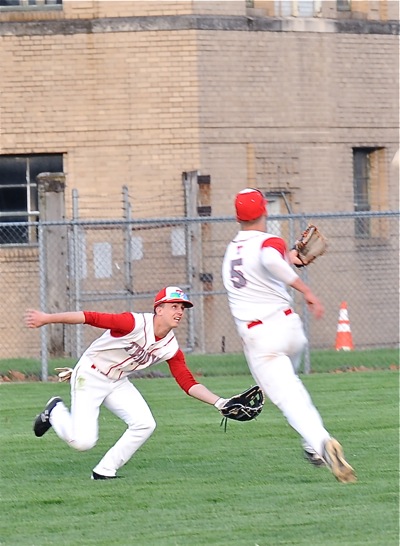 Weston Smith (left) and Jacob Adams converge on a ball during Tuesday’s win over Centerville.

Brogan helped his cause with a double, walked twice and knocked in three runs. Kendall and Smith also doubled. Snider and West both scored a pair of runs as eight different Trojans scored at least one run.

“We seem to have more confidence at the plate when Cole is on the mound. I don’t know that relates but we seem to put up more runs for him,” Welker said. “The guys had great approaches at the plate. We were patient. We had a few walks. (The Elks) struggled finding the zone earlier in the game so we did a better job the last couple nights at the plate. We like that approach.”

Troy hosts Stebbins on Thursday before taking on Tippecanoe in a key GWOC American North showdown. Tipp (9-4 overall, 7-1 GWOC) is second in the division behind Butler (9-4, 6-0). Troy is third at 4-2.

Troy hosts Tipp at Market Street Field on Monday and travels to Clawson Field on Tuesday.

“Being down two losses in the league, I’m not happy about that. That hurts,” Welker said. “Now we have to play pretty tight ball the rest of the way. We always have high expectations and we feel we can compete at that level. But our margin of error has shrunk. It’s not extra pressure. We just have to battle. Our guys are ready to do that.” 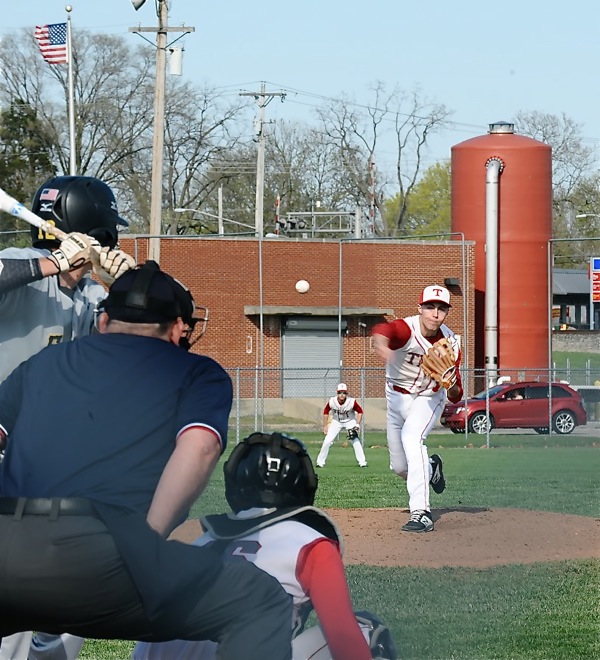 Their defense was shaky, but senior Cole Brogan delivered another solid effort from the mound to secure a win over Centerville. (Press Pros Photos by Greg Billing)