Comments from readers this time on former president Dwight Eisenhower,  Pee Wee Reese, favorite old baseball cards…and why is there so much baseball on Press Pros, and no softball?

The first two weeks of April have brought us a shower of a different kind…emails and comments from readers taken on our Match 28 column on former president Dwight Eisenhower, our tribute to baseball hall of famer Pee Wee Reese, our homage to baseball cards, and from one reader in upstate New York…a plea to have someone in Lucasville, Ohio at least clean the headstone of former baseball executive Branch Rickey, who brought the first black player to the big leagues in 1947, Jackie Robinson.

But surprisingly, fifty years after his death several people either do, or don’t like “Ike”.

“Press Pros, it had to be a slow news day if you wrote about Dwight Eisenhower, and even called him one of our best presidents.  Why?  Because he was a general in the Army and knew how to wage war?  If you knew your history you’d know he probably ranks in the top five for getting little or nothing done while he was in office.  Unfortunately, the country was so naive back then we elected him twice.”  …  John Pula

(Ed. Note:  If you’re condemning Eisenhower because he didn’t promise a chicken in every pot and a Buick in every garage, like today’s presidents do, that didn’t come until LBJ and the great society, back in 1964.  But Eisenhower did make the national system of interstate highways possible.  He’s given credit for not spending beyond a balanced budget, and he brought the Korean War to an end.  There were no Kardashians back then, so you can’t blame that on him.)

“Eisenhower was a crony to the most powerful Pentagon in history, and his priorities were clearly on those that helped put him in office.”  … Jas. Propst (Columbus) 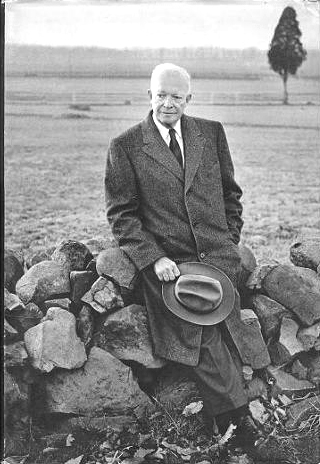 Photograph of Eisenhower leaning on a stone fence on the Gettysburg battlefield two years before his death in 1969.

“You asked, who of this generation even remembers Dwight Eisenhower?  I do.  And I remember Adlai Stevenson, too. He was Illinois’ favorite son. He was a man of good character, as I recall and my parents voted for him. I remember going to the polling place with mom and dad. Mom explained to me how important voting was and how lucky we are in this country to be able to go into the voting booth, cast a ballot, and never have to tell anyone who you voted for. We were free to choose and keep our ballot secret. I remember seeing mom’s high-heeled legs with seamed hosiery appearing from beneath the voting booth curtain until she re-emerged after casting a ballot. Women and men got dressed up to go vote back then – suits and ties, high heels, hats, gloves.  My mom was not fond of Ike and used to say that all he ever did was play golf.  In those pre-‘me-too’ days, no one talked much about Eisenhower and his war-time mistress – the one he pulled strings for to get her U.S. citizenship after the war. Seems we’ve heard that history repeat itself recently.  And, I remember that he had heart problems and was treated at the Fitzsimons Army Hospital in Aurora, Colorado. Years later I was treated there as an Air Force dependent during the Vietnam era.  However, I did not recall that opening day of baseball season was the anniversary of the day he died…but I didn’t know it was opening day, either.”  …  Cheryl Ewing (Naperville, Il)

(Ed. Note:  Cheryl, to add to your comment about getting dressed up to vote, the last time I voted the guy in front of me wore flip flops and had more ‘tats’ and piercings than clothes.  Nice!)

“I remember Eisenhower because I was 25 years old when he was elected and my dad always said he was the only one since Roosevelt who had respect for the taxpayer’s money.  My only regret about him was Richard Nixon.”  …  Joe B

Greg Hoard is a really gifted writer of nostalgia and his story on Pee Wee Reese brought this response:

“I loved the Pee Wee Reese story and Hoard’s visual style of painting the picture of Reese talking while eating peanuts and smoking his pipe.  I wish he would write more stories like that and less about Ohio State baseball.”  …  Don McCauley

Our other nostalgia piece on baseball cards brought more comments than there’s space to share them: 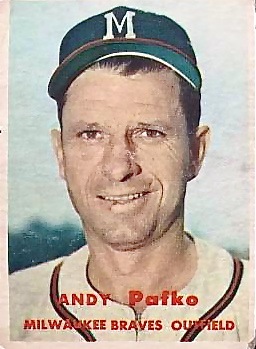 “I loved, loved, loved that article about the baseball cards.  I still have some of the ’59 cards and my favorite from that set was always Smoky Burgess, the old catcher with the Reds and the Pirates.  The first card I ever got was an Andy Pavko card from 1957 and my dad liked him because he looked like a guy who worked as a mechanic during the day and played ball at night.  Do you remember him?”  …  Bob Cline

(Ed Note:  Actually I do, and I think your card is pictured here.  Pafko is actually spelled with an ‘f’ and not a ‘v’, and he was a very good outfielder for the Dodgers and later the Braves.  Your Burgess is card is an excellent example of that ’59 set with the lime green background and his signature on the front.  And the backs were really cool, too.  Now, do I know my cards, or what?)

“I still have a lot of my old baseball cards and enjoy getting them out to look at them from time to time.  My favorite were always Reds cards from the 60s and 70s, and the early cards of the guys who went on to become the Big Red Machine, like Bench and Rose.”  …  Keith Phillips

“Enjoyed your story about Roy McMillan and Joey Jay, and wondered if you knew that Joey Jay was the first Little League player to make it to the big leauges?”  …  David Waller

(Ed. Note:  Since you mentioned it I do remember that, and I remember the old broadcaster Waite Hoyt talking about it.  Jay had a couple of really good years with the Reds, and better than McMillan had with the Braves, but I always liked McMillan and hated that the Reds (owner Bill DeWitt) traded him.

“I wonder why there’s so much baseball coverage on Press Pros and no softball stories.  Can you explain?”  …  Carol (Troy, Oh) 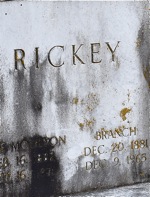 (Ed. Note:  Fair enough, and we’ll do it by saying that softball is a sport that’s often played during baseball games.  That said, we usually don’t have enough staff to do both.)

And finally, a reader from New York state wrote to us about the condition of Branch Rickey’s headstone in the township cemetery in Lucasville, Oh:

“Your article reached me via Twitter and I was disappointed at the condition (from the photo) of Mr. Branch Rickey’s tombstone.  I wonder if there’s anyone [in Lucasville, Ohio] that can be contacted to clean and restore it to a more favorable condition.  It’s a shame that the man who integrated baseball should be disregarded in this manner.”… Kenneth Rheimers