Buckeyes use three home runs to win first game of Saturday’s doubleheader, and the weekend series from 24th-ranked Michigan.

Columbus – The unhappiest people on the grounds of Bill Davis Stadium weren’t necessarily limited to those wearing maize and blue baseball uniforms around mid-day Saturday.

While Ohio State was slugging the ball all over the diamond in the second and third innings of the first game of a double-header, there were as many as 500 people standing outside the stadium longing to get through the gate and see the show.

It wasn’t until the middle of the fourth inning when almost everyone was able to get a seat.

The watch words are “almost everyone.’’

For a Buckeye fan, standing wasn’t bad at all. Your team got home runs from Dezenzo, junior left fielder Dominic Canzone and senior center fielder Ridge Winand on the way to a 10-4 victory over the Wolverines.

Michigan came in with the No. 24 national ranking and sitting in first place in the Big Ten.

A bulk of the crowd cleared out by the start of the second game, and it turned into a dud with the teams combining for six errors, 21 men left on base and two batters hit by pitches.

The Wolverines won 6-2 on the strength of right-hander Jeff Criswell straitjacketing the Buckeyes to the tune of six hits, no earned runs or walks and five strikeouts in 6 2/3 innings.

“We’re disappointed not to win Game 3,’’ Ohio State coach Greg Beals said. “At the end of the day you win the series and you win the rivalry, so that’s good. The thing for me and the thing for our ball club to take away was how well we went about it, the energy we had and the focus we had, because they were locked in. They are exhausted right now. It’s quiet over there (in the clubhouse). I love the fact that our guys spilled it this weekend.’’ 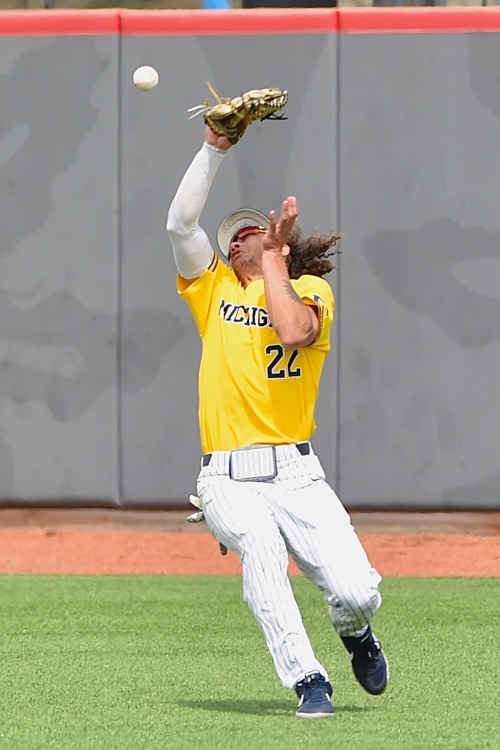 Not without risk…Michigan’s Jordan Brewer took a baseball to the eye on this misplay of a base hit during Saturday’s double-header.

With five Big Ten series remaining, the goal is to be one of the six teams that qualify for the conference tournament and to win it for an automatic bid for the NCAA tournament.

There have been potholes with shortstop Noah West playing just 19 games because of season-ending knee ligament surgery and catcher Dillon Dingler missing five weeks to have a broken hamate bone in one hand surgically removed.

Second baseman Matt Carpenter has missed the last nine games with a groin injury and his replacement, Kobie Foppe, left the second game after behind hit by a pitch around the mouth and nose.

“I thought our guys met the challenge,’’ Beals said of the Michigan series. “We swung the bats really, really well. We beat their pitching staff for two games – beat them. That’s what these guys are capable of.’’

And what about the crowd, coach? 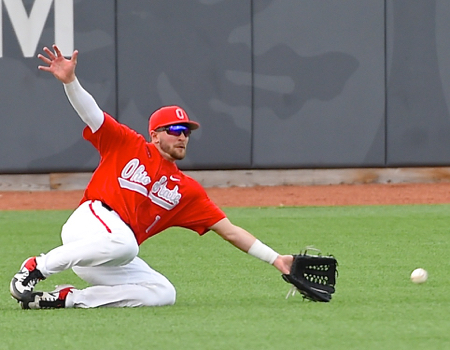 Brady Cherry narrowly misses this line drive off the turf in game two of Saturday’s split with Michigan. The Wolves won the second game, 6-2.

“I loved it,’’ he said. “Our marketing people did a good job of piggy-backing the crowd that comes from football (for the scrimmage). It’s also the school up north and people come for that anyway. Today was great.’’

The crowd had a lot to shout about, beginning with Dezenzo hitting a two-run homer to dead center in the second inning. Brent Todys was on first after a single.

Then Ohio State hammered starter Karl Kauffmann for six runs on four hits in the third to lead 8-0. The big blows were a leadoff home run off the base of the scoreboard in right-center by Canzone, a run-scoring triple by Brady Cherry and a three-run homer by Winand.

Winand pranced around the bases like a child, and no one could poke at him for that.

“It was my first collegiate home run and it’s against Michigan,’’ he said. “I worked hard for it. I got it all. I’ve been grinding for five years. I rounded the bases and felt all that hard work had paid off, and it was against that team up north.”

A redcoat gave the baseball to Winand’s mother. 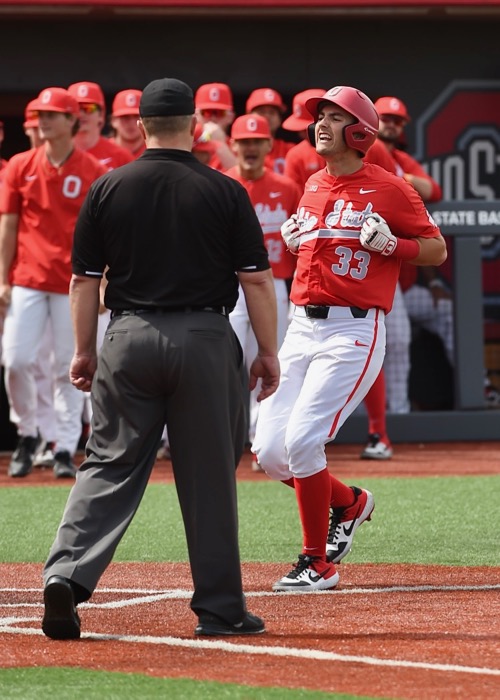 The ‘brotherhood’ awaits…and enjoys Dom Canzone’s reaction to his third inning home run in Saturday’s 10-4 win in the first game.

Winand took it all in. It’s not every day that you hit your first home run and play in front of one of the largest crowds in team history.

“It was unbelievable,’’ he said. “I’ve never played before a crowd like that. Just winning in front of all those people is a surreal moment, especially against Michigan. I’ll never have a feeling like that again.’’

He also was thinking big picture, beginning Tuesday with a non-conference game against Xavier and ending on the weekend with a three-game series at Maryland.

“I think this is going to turn us around,’’ Winand said. ‘’We have to continue to do our thing at the plate. We’re ready for this.’’

Canzone played like a Big Ten player of the year in going 9-for-14 with four runs scored and four runs batted in. 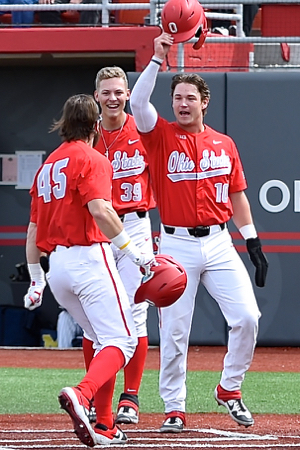 Hat-raising…The Buckeyes celebrate a series win and taking four of five game for the week.

It was Canzone and other leaders who got the team together at the top of the week and told them there had to be a lot more focus and toughness from everyone.

“I just wanted to do everything I could do for my brothers,’’ Canzone said of his big weekend. “That team up north wasn’t coming in here and taking away a series from us. That was the biggest thing for me. We also showed ourselves what we could really do. We have to take this to Maryland and have the same type of energy.’’

Canzone said the Buckeyes were “fastball ready’’ against Michigan and “waited for their pitch.’’

Beals said he would relax in his living room and watch the fourth round of the Masters.

The players were dragging from playing five games in as many days.

“I’m pretty exhausted right now,’’ Dezenzo said. “Playing 18 innings in a day is never easy. Taking four out of five this week definitely puts us on the right track, especially against Michigan. It’s something coach mentioned at the end that we have to take this series win and build off it.’’ 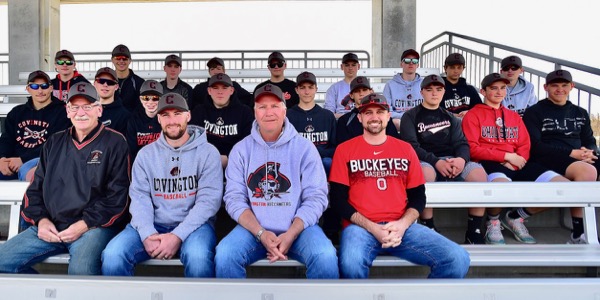 Buccs of another kind…Covington High School’s baseball team was on hand for Saturday’s double-header as guests of Press Pros, and part of a record throng of 4,841 to watch OSU and Michigan. 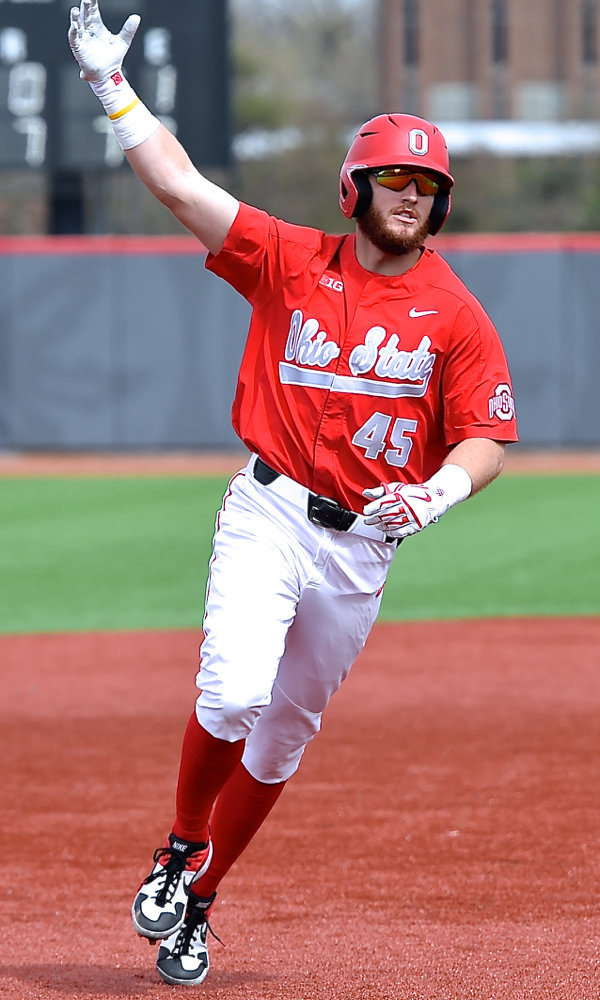