Ohio State Quarterbacks, Defense Have Their Moments In Spring Game

Justin Fields appears to have locked down the starting job … Matthew Baldwin throws plenty of passes but shows he needs more work … Defense appeared to be playing faster, which is just what coaches want.

Columbus – Finding a replacement for Dwayne Haskins won’t be easy. We knew that. Losing a player who threw for 50 touchdowns and nearly 5,000 yards is like having an anchor store suddenly close its doors at a shopping mall. It’s impossible not to feel an impact.

But if the Scarlet and Gray Game showed us anything Saturday — and it’s always dangerous to read too much into a spring game — it’s that Ohio State will be just fine at quarterback. Again.

Justin Fields was just 4 of 13 passing for 131 yards. But the Buckeyes seemed more intent on keeping him out of harm’s way than allowing him to flash his skills.

He did connect with Binjimen Victor for a 98-yard TD. The ball was ever-so-slightly underthrown, and Victor only had to beat a walk-on cornerback, Lloyd McFarquhar. But that pass was reminiscent of Haskins.

He also rushed eight times for 38 yards in the scrimmage, which adopted touch football rules. He had a six-yard dash around the edge where he just out-ran defenders to the end zone. Some might say that score was reminiscent of J.T. Barrett, but Haskins’ predecessor never showed that kind of burst.

His read-option ability along with a strong arm is why Fields — a 6-3, 223-pound sophomore and the highest-ranked recruit to come to Ohio State since ratings began around 2000 — is the clear-cut favorite to start.

Matthew Baldwin, a 6-3, 215-pound redshirt freshman, also showed some wheels and an ability to dodge trouble. But he’ll probably spend most of the season helping to signal in plays from the sidelines.

First, the good: He was 20 of 36 passing for 246 yards with two touchdowns. He had an arching 18-yard scoring pass to highly touted freshman Garrett Wilson and a well-timed eight-yard TD toss to C.J. Saunders on a crossing pattern.

He also had a nice throw to tight end Rashod Berry for a 29-yard catch-and-run and a dart into a tight window for a short gain to Jaelen Gill, who had seven catches for 95 yards and looks as if he could grow into that Parris Campbell role.

But Baldwin obviously had the bulk of the reps because he needs the work and the coaches have decided they didn’t need to see anything more from Fields.

Now, the bad: He had a goofy fumble where the ball just fell out of his hands when he cocked his arm. And he had three ghastly interceptions, two by maligned safety Jahsen Wint and another by promising DB Amir Riep.

We walked away from last year’s spring game thinking, sensing, sorta convinced that Haskins would get the nod over Joe Burrow. And it’s scary to think how close the coaches might have been to not making the right choice there. No knock on Burrow, but nobody knew the Buckeyes had a QB on their roster who would be a surefire first-round NFL draft pick one year later.

Rest assured, there’s no hand-wringing going on this time.

The interception by Riep was an athletic play on a ball that was a little behind the receiver, and it would have been a pick-six if tackling were required. And the defensive coaches had to be encouraged by the thievery through the air after the Buckeyes managed just 11 interceptions in 14 games last season.

The defense will be under heavy scrutiny because of its alarming disintegration last season. New coach Ryan Day rightly decided on almost a complete overhaul of the staff. The unit was the worst statistically in program history, and the Buckeyes managed to go 13-1 and win the Big Ten and Rose Bowl only because of the incomparable Haskins.

Four 10-minute quarters, including two with a running clock, hardly provided enough plays to make an adequate assessment. But the plan is to simplify the scheme and allow the defenders to just read and react, and they certainly seemed to converge on the ball in a hurry.

The four QBs were a combined 29 of 64 for a 45.3 completion percentage, and the Buckeyes would take that rate from opponents all season. 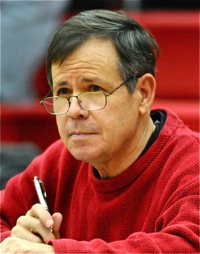 But spring games always have a way of leaving fans ambivalent. Every good play means someone on the other side of the ball failed to do his job.

That’s certainly the way it was in the trenches. Defensive ends Chase Young (a likely All-American) and Tyreke Smith (a budding star) had sacks where they almost beat the shotgun snap to the quarterback.

Who was doing the blocking on those plays? Right tackle Nicholas Petit-Frere, a redshirt freshman who is expected to have a major role this season.

But I’m guessing Day would have no qualms with the results of those one-on-one matches with five months to go before the first game.

Petit-Frere can improve with better technique, but the explosion Young and Smith displayed is something that can’t be taught. 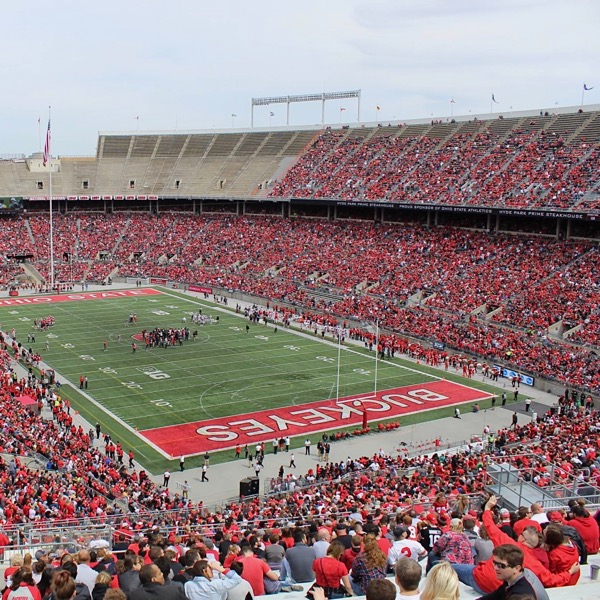 The usual crowd turned out on a beautiful April day to see the Gray team beat Scarlet, 35-17. (Photo Courtesy of OSU Sports)