Bucks Try On Tougher Attitude For Size In Win Over UD

Columbus – At the top of the week, Ohio State’s team leaders had a come-to-Jesus session with the coaching staff about how to go about doing a snappy about face going into the put up or shut up time of the season.

The Buckeyes had dropped five straight games, including a three-game sweep against Northwestern, of all teams.

Left fielder Dominic Canzone was one of those strong team voices, and he relayed the message to teammates about how everyone needed to be a whole lot tougher in going about their business.

But Canzone didn’t expect first baseman Conner Pohl to take the words so seriously that he took on a fence going after a foul ball with the bases loaded with Dayton Flyers in the eighth inning on Wednesday night.

Pohl didn’t make the catch in looking like a 6-foot-5 step ladder full of paint cans and brushes being knocked over, but it was one example of the Buckeyes trying to change their ways.

“I kind of screwed him over that time,’’ said Canzone, who was charging from right field. “I told him he had room and there was no room there. That was 100 percent on me.’’

In the bottom half of the inning, Pohl drew a bases loaded walk on a full count and Dillon Dingler followed with a sacrifice fly to boost Ohio State to a 4-2 victory at Bill Davis Stadium. 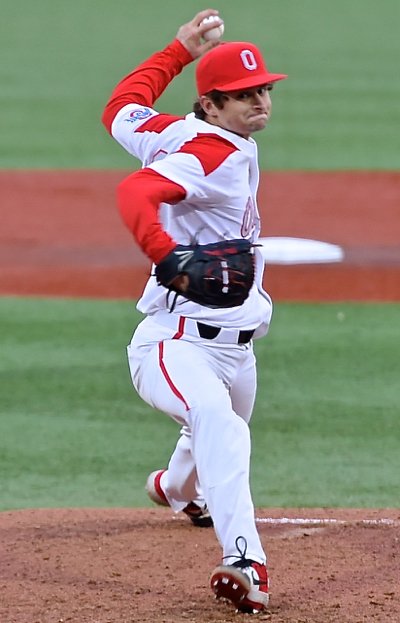 Paired with a come-from-behind victory at Ohio University on Monday, the Buckeyes (18-16, 2-4) will go into a three-game home series against Michigan (23-9, 4-1) beginning Friday with some oomph behind them.

“Getting two wins in mid-week gives us some momentum for the weekend,’’ coach Greg Beals said. “The one thing I told the guys is that we executed offensively (Wednesday). It wasn’t like we banged the ball all over the ballpark, but we took advantage of the opportunities we had.’’

There was true joy coming from the clubhouse, with the players getting a little rowdy amid blaring music.

The meeting about toughness was only the latest for a team still trying to find itself.

“Obviously, after a tough weekend we had to re-evaluate ourselves,’’ Canzone said. “The point of emphasis was on toughness and, to be honest, we were just soft. Tonight and last night we showed how tough we can be and showed how we can do it day in and day out. It was great to see us battle in back-to-back nights.’’

Canzone said there would be reminders to bear down the rest of the way.

“We’re holding everyone accountable, with everyone knowing that if they do their job everything is going to work out,’’ he said. “If someone doesn’t do his job, kind of let him know he didn’t or how he can improve the next time. It’s real this time. It’s not just, ‘I’m in it.’ It’s let’s go, we’re dogs and we’re in it.’’

If you enjoy baseballs being launched all over the diamond, this game was not for you. Ohio State had five hits and Dayton eight.

But true freshman left-hander Mitch Milheim was solid making his first college start. He gave up five hits, two runs and one walk and struck out three in four innings.

Ordinarily, junior right-hander Jake Vance would have started against Ohio or Dayton, but asked Beals and pitching coach Mike Stafford to be sent to the bullpen after being roughed up during most of his seven starts. He had a 6.75 earned run average in eight games total.

Vance was efficient in giving up three hits and one walk and striking out four in four innings to get the win last night. 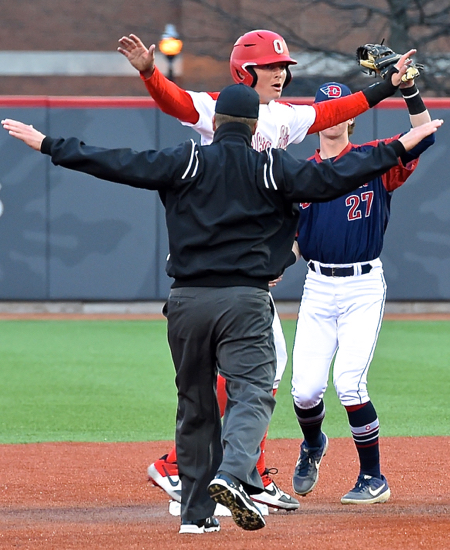 Zach Dezenzo gets the call on his double.  He later scored.

“Some of my starts haven’t been as good as I wanted them to be, so I kind of told them I wouldn’t mind coming out of the pen and trying something different,’’ he said. “It was nice to get back out there in a high-intensity game. The adrenaline was going a little bit, and the team played well tonight.’’

Beals is experimenting with the midweek starters and bullpen out of necessity, and on this night he came up with a winning hand.

It was in the eighth when Vance had to rummage all the lessons learned in two-plus varsity seasons with the Flyers (18-14) loading the bases with one out on a leadoff walk, error by third baseman Marcus Ernst and infield single by Marcos Pujols.

Vance was aggressive getting the first out when he nailed the lead runner at second on a sacrifice bunt attempt.

Then he struck out Takahiro Yamada and got Dylan Keller on a soft fly to right to end the threat.

“I don’t know, whenever it’s bases loaded I try to hit another level and turn it up a notch,’’ he said. “I just tried to make some good pitches and was hitting them with the fastball on both sides of the plate.’’

The pitchers are trying to be more nuts and bolts with their pitches to throw more strikes. 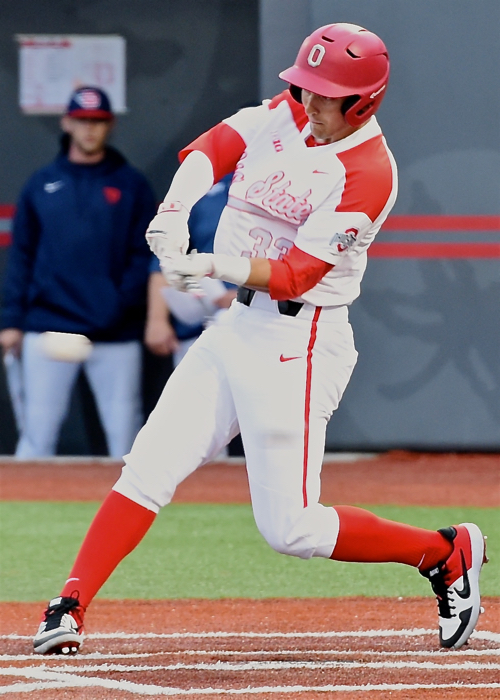 Dom Canzone had 2 hits and 2 runs for Wednesday nights win.

“Last week wasn’t that great,’’ Vance said. “This week we were trying to get back to basics and throw fastballs over the plate and trying to get ahead of guys.’’

In the Ohio State eighth, Ridge Winand led off with a walk and Canzone singled to right. Both advanced on a textbook bunt up the third base line by Kobie Foppe and Brady Cherry was walked intentionally to load the bases.

Part of the Buckeyes problem at the plate this season has been a tendency to try to make things better with one swing. This time, Pohl patiently watched two borderline pitches be called balls for the run-scoring walk and Dingler took an easy swing to get the sacrifice fly.

“That’s where I go back to just the toughness of being able to do your job in a tight situation and being able to sacrifice yourself for the team even if you are 0-for-2 or 0-for-3,’’ Canzone said of the eighth. “Being able to put the bunt down is game changing. Kobie Foppe got the bunt down.’’

There was no drama in the eighth when Andrew Magno got all three batters he faced in 13 pitches.

Taking two out of three games against Michigan will be difficult. It leads the Big Ten in batting average and earned run average and is second in fielding. 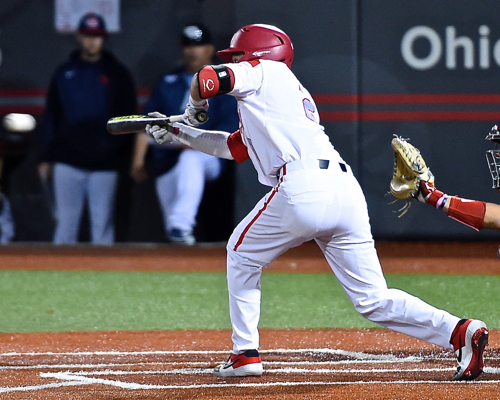 Kobie Foppe advanced two runners on a bunt in the 8th.

Seventh-year coach Erik Bakich has a front-runner for conference pitcher of the year in Tommy Henry. He’s 6-2 with a 1.67 earned run average and 65 strikeouts.

Outfielder Jordan Brewer is batting .364 with nine home runs and 33 runs batted in and has stolen 12 bases. Infielder Blake Nelson (.333), outfielder Jordan Nwogu (.325) and infielder Jack Blomgren (.314) rank among the top 11 in batting.

“There’s not a whole lot more than you need to say than Ohio State-Michigan,’’ Beals said. “Let’s go.’’

Asked how critical it is to get back into the top half of the conference standings, he shook his head.

“We’re not even looking at that,’ Beals said. “It’s a rivalry. Let’s toe it up at 6:35 Friday night and get after it. It’s great competition. I guarantee you those guys in that locker room will be ready to go.’’

Canzone said the players would be ready.

“It’s a huge Big Ten series, obviously,’’ he said. “Losing to them isn’t an option. We’re going to put our best foot forward and we’re going to do the best we can and stay within ourselves.’’

The Michigan series has been interesting this decade. In 2017, the Wolverines won two of three games. The season before, Ohio State swept the regular-season series and won two games in the conference tournament. 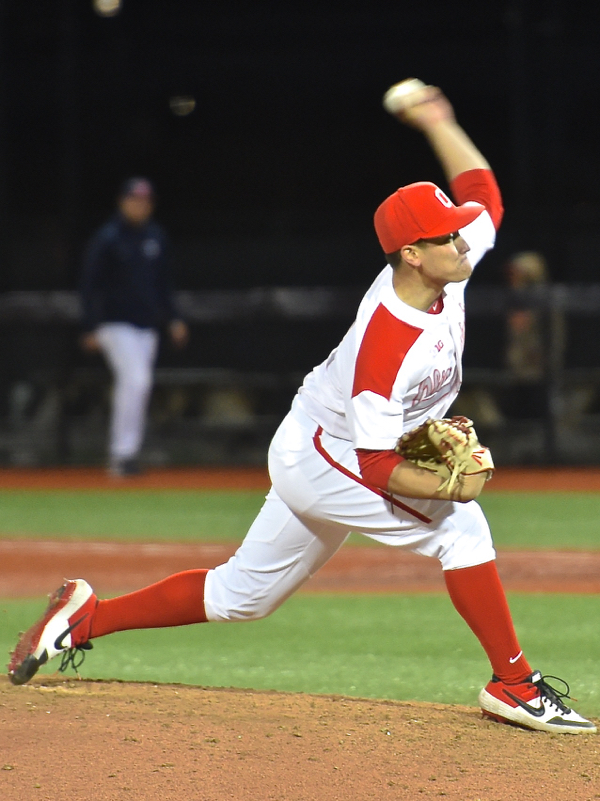 Andrew Magno finished the game by getting all three batters he faced in 13 pitches. 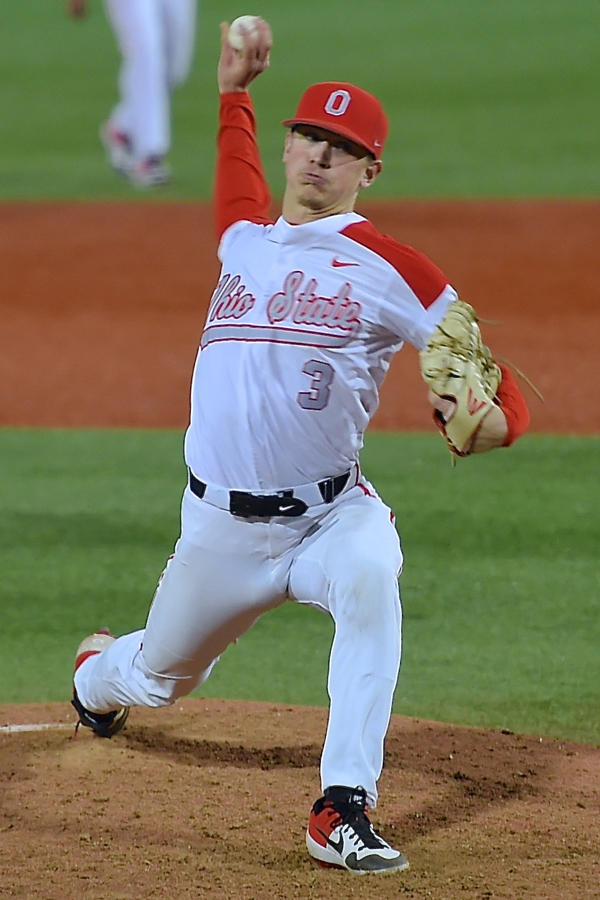 Jake Vance gave up three hits and one walk and striking out four in four innings to get the win. (Press Pros Feature Photos By Julie McMaken Wright)