A horrible start and early struggles by starting pitcher Jake Vance proved to much to overcome.  OSU drops Wednesday non-con contest to Cincinnati.

Columbus – What probably lured 1,351 people to take in Ohio State’s game against Cincinnati was the intrastate rivalry and spring trying to elbow winter out of the way once and for all with the thermometer reading 58 degrees at the first pitch.

The rivalry part turned into a colossal dud by the second inning and the warmth was gone once the sun set.

Buckeyes starter Jake Vance had a night to forget in walking five, hitting two batters and giving up six runs in 1 1/3 innings in putting the team into a tar pit of a six-run hole.

Designated hitter Brent Todys came within 5 feet of tying the game with a grand slam in the eighth, but that was about the only excitement Ohio State generated in losing 9-5 to the Bearcats on Wednesday at Bill Davis Stadium.

It was the third straight season Cincinnati (11-16) beat Ohio State (16-13) and the seventh time this decade.

Cincinnati starter David Orndorff won his first game of the season in giving up three hits and three runs in six innings.

Radio broadcasters from both schools said on the air that Vance was getting “squeezed’’ on ball and strike calls by plate umpire Grady Smith.

Smith had his own problems when he took a pitch from T.J. Brock directly on the mask in the fifth inning and had to leave the game. Beals said Brock and catcher Dillon Dingler got crossed up.

Vance walked the first two batters of the game and hit the third with a pitch, but wriggled out by giving up one run on a groundout.

The second inning was a disaster for him as the Bearcats sent nine batters to the plate and scored five runs on two hits. 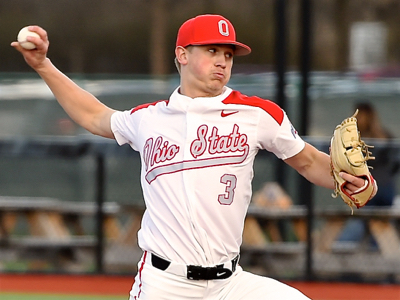 Junior Jake Vance had a rough opening…walking five, hitting two, and six runs in an inning and 1/3rd.

“They outplayed us tonight, and it starts on the mound,’’ Beals said. “It’s really tough on a ball club when you go down 6-0. That’s a tough road to hoe.’’

The game wasn’t a total washout in that Brock and fellow freshman Mitch Milheim did a pretty fair job of keeping Ohio State within the same area code as Cincinnati for a possible comeback.

That almost happened in the eighth when the Buckeyes got a run on a sacrifice fly and bases-loaded walk before Todys hit an opposite-field shot to right field that landed over the wall but foul by approximately 5 feet. He wound up striking out.

Mid-week games are critical for first-year pitchers to develop for the day when they will be starting Big Ten games on the weekend.

Last year at this time, Brock was pitching for Cincinnati Country Day, a Division III school, and Milheim for eventual Division I champion, Olentangy Liberty.

Pitcher Adam Niemeyer, who was a two-time captain through last season, made the Big Ten all-freshman team in 2015 on the strength of his mid-week performances.

Brock was excited about his outing.

“I was really happy to have a situation where my name was called and hold the runs down and do something for the team,’’ he said. “For myself, I look at every game as very important.’’

What has he learned about making the immense leap from small high school to major college? 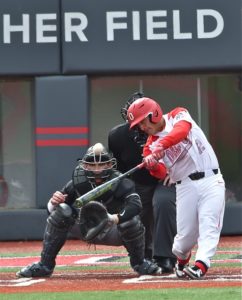 Brent Todys came within a foul pole of tying the game with a grand slam in the eighth.

“It’s a very big jump,’’ Brock said. “In high school, I could just get away with throwing fastballs all game long. Here, you have to locate your fastball and hit with your second pitch, if not your third. Probably the biggest thing I’ve learned is to get ahead with strikes and come in with your fastball. Once you do that, you can do anything with a hitter.’’

Brock came on with two runners on and one out in the second. He gave up a sacrifice fly to center to Joey Wiemer, but got Cole Murphy on a fly to center.

In the fourth, he gave up a leadoff walk to Jace Mercer and double to Joey Bellini and a run on a wild pitch. But he buckled down to get two groundouts and a fly to right.

“A lot of freshmen and relievers get their work in mid-week games to stay sharp,’’ Beals said. “Most relievers don’t like to take four days off. It’s my philosophy to give them just enough work to stay sharp. It was good for T.J. to get that amount of work.’’ 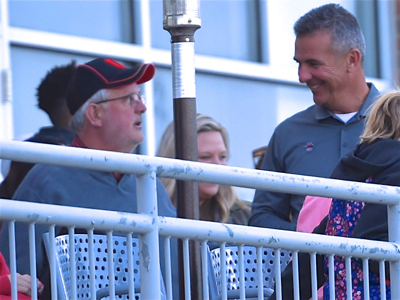 Milheim got the side in order in the sixth and struck out the leadoff man in the seventh before giving up a single and leaving for Thomas Waning.

He considered this to be a positive step.

“After struggling a little bit the last couple of weekends it was good to get out there for a mid-week game,’’ Milheim said. “It will make me feel comfortable for the weekend.’’

Pitching coach Mike Stafford has been working on the side with Milheim to keep him from dropping his left arm down upon delivery.

“I felt a lot better out there today than I have the last couple of weeks,’’ he said. “I was talking with coach and my arm started dropping and I wasn’t getting good spin on my curveball and had less command on my fastball. Today, it worked out a lot better.’’

There are eight freshmen pitchers and only so many innings for each in order for them to learn and stay sharp.

“Freshmen have to grow up at some point, and our guys are doing that. They are close. Their mentality is what I’m pushing for. It’s exciting. I’m pushing for them to keep growing and keep learning.’’ 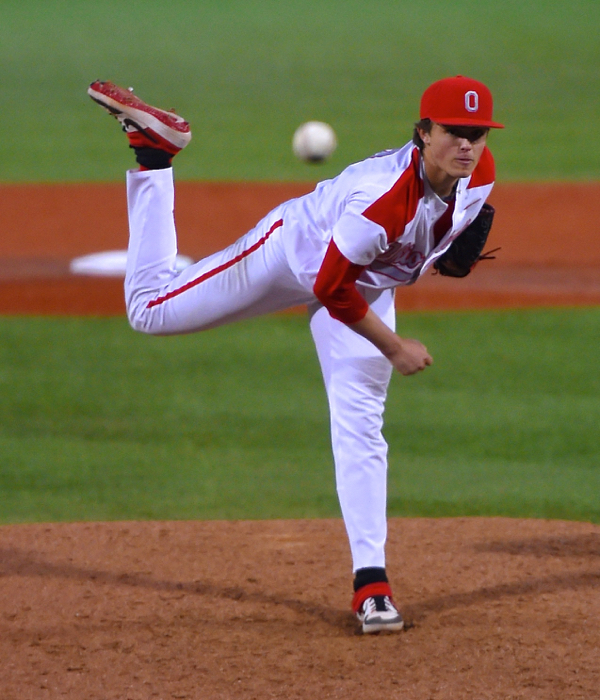 The relief work or freshmen TJ Brock (above) and Mitch Milheim gave the Buckeyes opportunity for a late comeback. (Press Pros Feature Photos by Julie Wright)