Tipp City – If the Sidney Yellow Jackets batters wondered what was going on Monday at Clawson Field, all they had to do was check the date.

The calendar said April 1. And Tippecanoe High School senior pitcher Kenten Egbert had the Yellow Jackets fooled with a fastball flirting with 89 mph and a curve that saw a couple Sidney batters bail out only to have the pitch bend back over the plate.

The 6-foot-2, 195-pound right-hander struck out 16 batters in Tipp’s 3-0 win on Monday evening, including a stretch of six straight in the third and fourth innings. He also struck out the side in the seventh to cap his two-hit gem.

“He was pretty overpowering today,” Tipp coach Bruce Cahill said. “It was pretty crazy. … We haven’t had too many guys in all the years I’ve coached that I can remember get 16 in a game.

“The nice thing about his fastball is it’s almost at the knees all the time. That’s a tough pitch to hit. He stays down in the zone. … He’s a hard working kid. Both him and Ian (Yunker). They’re great to have.”

“I was really happy with the way he pitched,” Sidney coach Tom Goffena said. “The first inning he had a couple walks that turned into a couple runs. A couple bloopers here and there. A couple balls just under gloves. All around he pitched really well and kept us in the ball game.”

Tipp sophomore Jack Cleckner and junior Cade Beam both drew one-out walks in the bottom of the first. Junior Nolan Mader and Egbert followed with RBI singles. Yunker, a senior, singled to load the bases before Larger induced a pop out to second and 6-4 grounder. 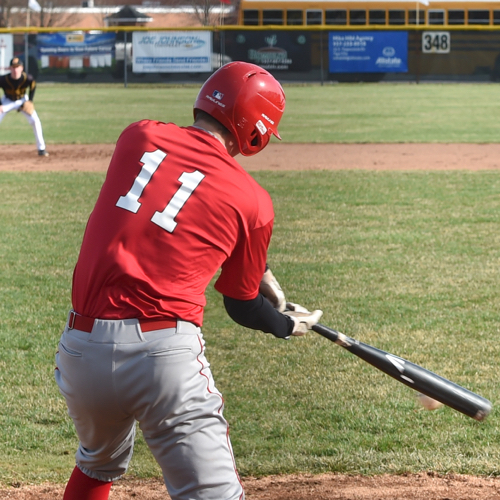 Tippecanoe’s Kenten Egbert helped his cause with a pair of singles in Tipp’s 3-0 win against Sidney.

Tipp made it 3-0 in the third. Egbert singled, Yunker walked and freshman Matt Salmon singled to load the bases with one out. Junior Eli Hadden walked to score Egbert. Larger again escaped further damage fielding a squeeze bunt right back to him. He tossed the ball home for the second out and junior catcher Ryan Cagle threw to first for the 1-2-3 double play.

Tipp scattered hits against Sidney but couldn’t come up with that big ht to break open the game. The Red Devils left eight runners on base. They had one caught stealing and they hit into two double plays.

“We really didn’t hit the ball hard. I think that’s what I’m most disappointed about is our offensive approach at the plate,” Cahill said. “We’re not good enough this year to do the things we’ve done in the past or gotten away with. We’re not experienced enough. That’s the way we’re going to have to do things, steal once in a while and squeeze things.”

“We’re headed in the right direction,” Goffena said. “We’ve been down the last four or five years. We’re starting to slowly climb our way back up. The kids are good kids and they’re responding.”

In his first start this season, which came in Florida, Egbert struck out five in 4.1 innings in a 10-0 loss to New Albany. Only one of the six runs scored against Egbert was earned. The Red Devils went 2-3 in Florida and in two of those games they made six errors in both. 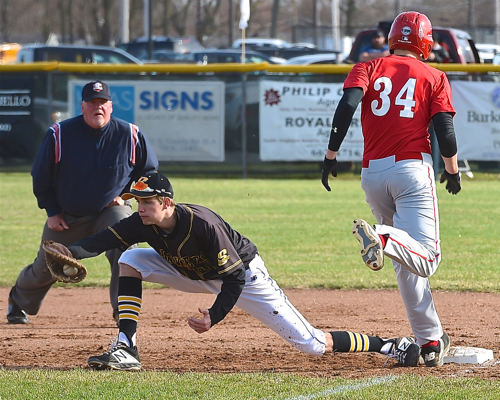 “Defensively when Egbert and Yunker are throwing they’re going to get a lot of double digit strikeouts,” Cahill said. “There are only so many balls put in play so we have to make those plays. … But those guys give us a chance to win every time they go.”

Egbert, who was battling the sniffles Monday, didn’t seem to mind the return to Ohio’s cooler temperatures. He worked fast enough Monday to even finish before the softball game one field over, not something easily accomplished in the typically quicker fastpitch games.

“The fastball was definitely a plus pitch today and so was the curve,” Egbert said. “I felt like the curve had good bite to it and the fastball had good run. Up in the zone it was missing (bat) barrels.”

The two teams meet again today at Sidney. The Red Devils are expected to throw Salmon, who is 1-0 with a complete game in Florida. Yunker (1-1 with 17 strikeouts in 11.1 innings pitched) started last Friday and could be available for relief if needed. 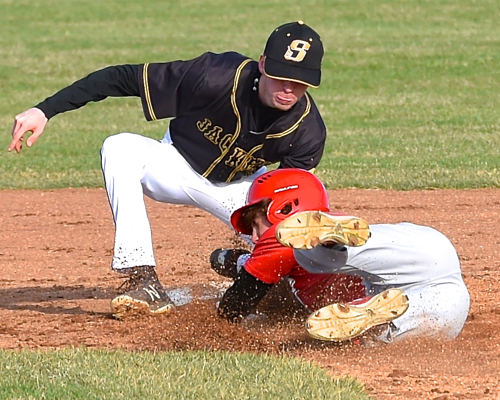 Second baseman tags a Tipp runner and get the out for Sidney.

Egbert, a Miami of Ohio recruit, has 21 strikeouts in 11.1 innings. Yunker, headed to Morehead State, has 17. It’s too too early to mention – but just for fun – Nick Otte holds the Red Devils’ record for strikeouts in a season with 111 in 1997.

“(Egbert) was just on today. I think he’s on a lot,” Goffena said. “But today he was especially on. He had a lot of strikeouts and in the back of my mind I was hoping that would raise his pitch count. He’s just a real fine player. There’s a reason he’s going to Miami. The only good news is he can’t pitch two good days in a row.”

Following Monday’s game Cahill picked up a rake and worked the dirt between second and third base. That’s about all the raking he’ll allow himself to do these days, but he does wonder what it’d be like to get in the batting cage against staff aces Egbert and Yunker.

“I haven’t picked up a bat in years,” Cahill said, laughing. “It’s funny because there are so many times I would love to get in there and see what I can do, just to hit. I’d probably embarrass myself so that’s why I choose not to. I tell them stuff like that all the time: ‘I betcha I can hit you.’ They say come on coach but it’s all right.”

Cahill, after all, knows what can happen when you face Egbert on April 1 … or any date. 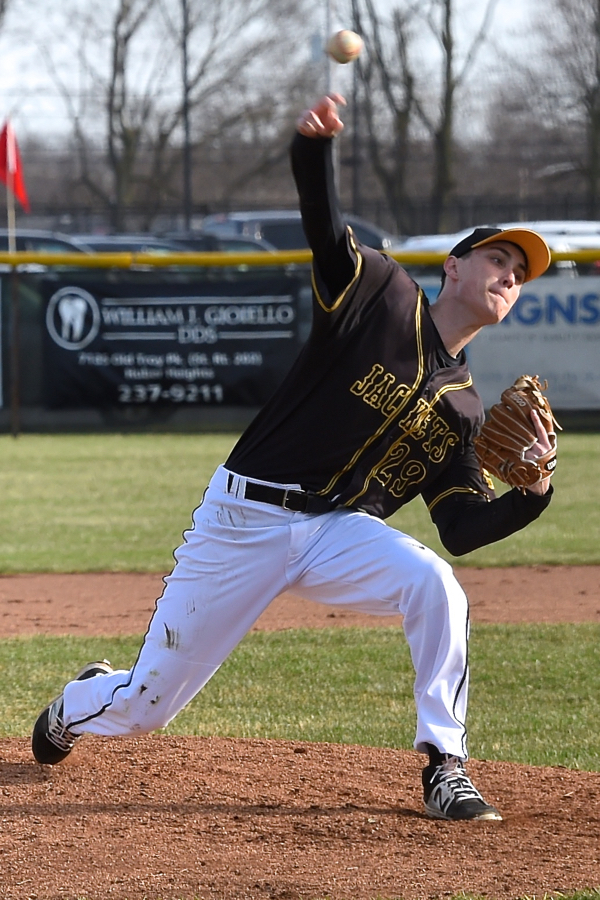 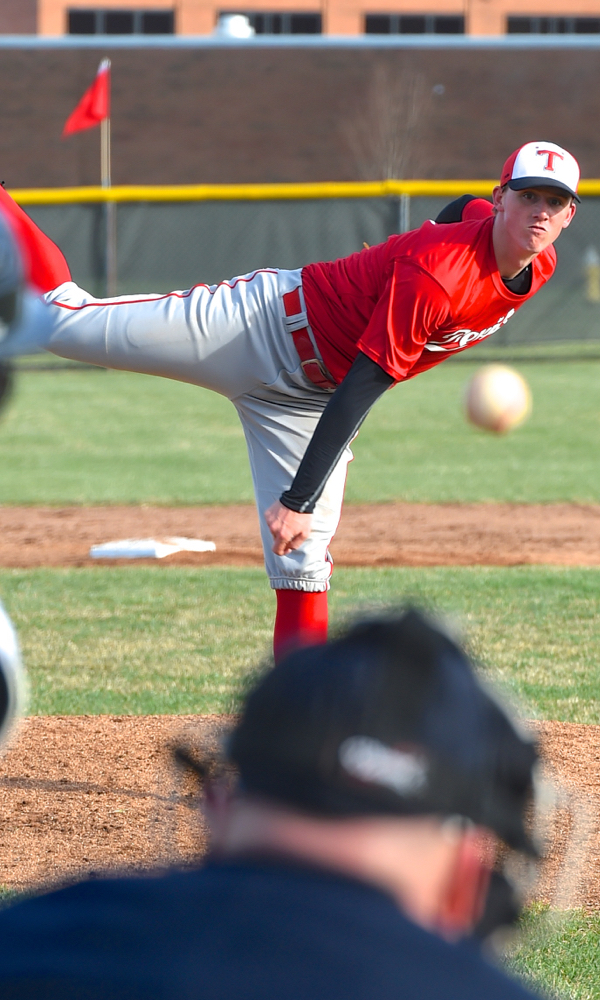