Their five game win streak came to an end in sophomoric fashion, as the Buckeyes pitching came a-learnin’ in a series finale loss to the Hawaii Rainbows.

Columbus – They say the term ‘Aloha’ means either hello or goodbye in Hawaiian.  And the traditional gift of greeting is a necklace of blooms – a ‘lei’.

Well the Hawaii Rainbow Warriors said goodbye with emphasis in the finale game of this four-game series on Sunday afternoon at Bill Davis Stadium, and ‘lei’d’ one on Ohio State pitching by pounding out 19 hits, scoring 15 runs, and laying wreck to a few earned run averages.

The Buckeyes took an early 1-0 lead in the first on a Dom Canzone walk, a stolen base, and an RBI single by second baseman Matt Carpenter.  And this followed a perfect, and efficient, top of the first by freshman Will Pfennig, making his first start, in which he retired the side in order on just eight pitches.

But then the wheels fell off.

Pfennig came out a completely different pitcher for the top of the second, surrendering four runs on four hits while throwing 25 pitches to retire three outs.  He would not come out for the third.

Instead, another freshman, Mitch Milheim did, inheriting a 4-1 deficit, but entirely manageable given the Buckeyes’ offense of late and for the fact of a mild breeze blowing out to left field.  Milheim had issues of his own, giving up a pair of runs immediately in the third…and reprised the shock of that Hawaiian greeting by giving up four more in the top of the fourth, the big blow coming on a three-run homer by Warrior third baseman Ethan Lopez.  Before you could say ‘Aloha’ they were down 10-1, and the team in green (Hawaii) was fighting at the bat rack in a feeding frenzy to get up to home plate. 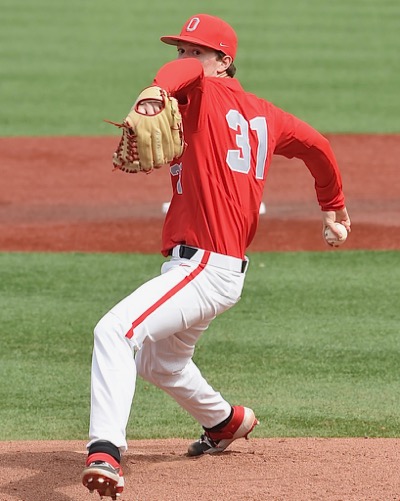 Another freshman, TJ Brock, came out for the fifth and fared no better, surrendering four runs on eight hits over the next 2.2 innings before giving the ball to junior Jake Vance, who retired the final out in the top of the seventh.  By that time the score was 14-2, and hopes of a comeback were about as remote as a whale sighting in the Olentangy River.

Hawaii starter Logan Pouelsen pretty much guaranteed as much by limiting the Buckeye bats to just two runs on four hits over the first seven innings, and Pouelsen (a UCLA transfer) had been anything but that good through his team’s first 23 games.  Control had been his nemesis, but Sunday he struck out four and walked just one in recording his first win of the year.

The Buckeyes did add a run in the sixth on singles by Nick Erwin and Canzone, and subsequently a Brady Cherry SAC fly to center field.  And in the bottom of the ninth they dented the plate again when Conner Pohl walked and later scored on an Andrew Fishel SAC fly.  That was it.

In his remarks following Saturdays 7-5 win Greg Beals spoke of how this young team (in pitching, principally) was still learning through on-the-job training…despite the benefits of a five-game win streak and having won six of their last seven.  And Sunday the comeuppance suffered by three of those pitchers was a lesson in large, bold type:  too many ‘bad’ strikes, too many fastballs up in the zone, and too many fastballs right down the chute with 0-2 and 1-2 counts.  Hawaii hitters, so frustrated over the previous three days, were eager and waiting.

“Today was all Hawaii,”  said Beals following Sunday’s loss.  “We had a good first three games against them, and today was all Hawaii.  17 hits by our three freshmen pitchers was a lot of hits and they learned that pitch quality has to be better.  Hawaii did a good job hitting, but I also think they got good pitches to hit.  We need to be in better counts, you can’t be up in the zone like we were today, and we were behind in the count too often.  That usually leads to the other team hitting.  Someone asked last night about how good Hawaii is?  Maybe they answered that question somewhat today.

“Those three freshman pitchers have to take something away from the way they pitched.  Part of the game plan was to split it up and give each of them two or three innings, depending on pitch counts, for them to get that experience.  We’re a week away from conference so the more times we can get ’em out there the better for them.  Hopefully they did learn from today.” 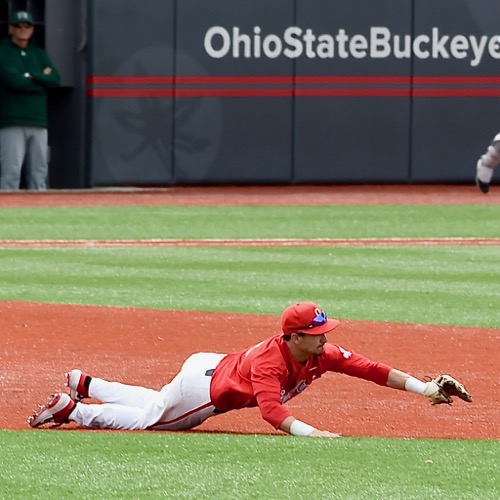 Nothing went well for the Buckeyes…this run-scoring single just out of the reach of second baseman Matt Carpenter in Hawaii’s four-run second.

“It really was a matter of execution,”  added Buckeye catcher Brent Todys, who handled the duties behind the plate Sunday.  “I thought Will was ready, he was excited to be out there, and I think it was good for him (and Milheim and Brock) to get this experience because they were ‘the guys’ today.  But the execution just wasn’t crisp.  When we wanted to go in we went out, and when we wanted to go out the pitch was in.  Just better determination on execution and focus.”

But, you don’t throw the baby out with the bath water and Sunday’s loss also goes down as one of those inexplicable days in baseball.  The previous work by Pfennig, Milheim, and Brock, by comparison, made their Sunday outings stand out as an aberration.

“And that’s what I told the team after the game,”  said Beals.  “Nothing really went our way, but you have to try and make things go your way.  Now we have the last game of the homestand on Wednesday (with Toledo), we need to bounce back, then roll with that confidence into conference play next weekend.”

For the sake of perspective, Hawaii did not leave happy, or with a trail or flowers on the way to the airport and an eight-hour flight home.  For the series they scored 29 runs on 28 hits…and still lost three of four.

Sunday marked Will Pfennig’s first collegiate start.  His record drops to 0-2, and his earned run a average now for 19.1 innings pitched is a respectable 3.72, despite giving up four runs in the loss.

The Buckeyes next play Toledo on Wednesday in a 6:35 pm start.  Junior Jake Vance (1-1, 5.11 era) gets the start.  “And these are important starts for Jake because he’s the leading candidate to be the ‘next’ starter behind our weekend rotation,”  said Beals.  “But we need to continue to develop Jake because those mid-week games are critical for momentum, for record, for RPI ranking, and it’s important for him to become ready in case we need help within the rotation.” 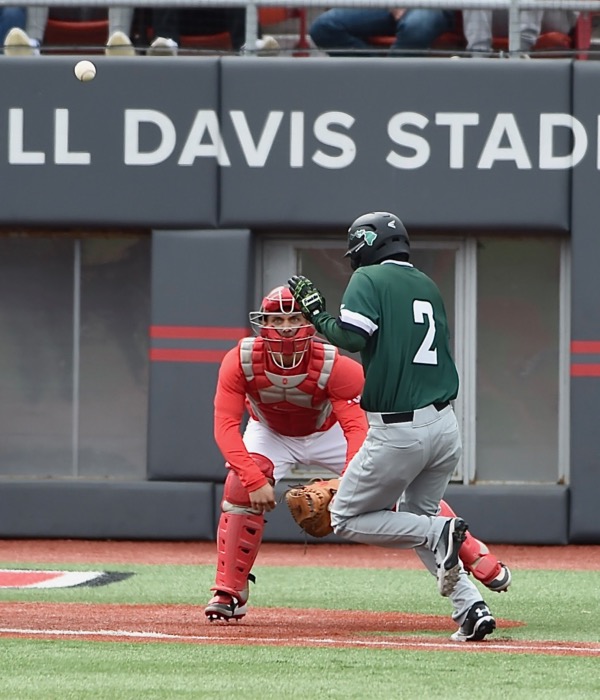 Rainbow eruption...Hawaii took three days frustration out on Buckeye pitching, scoring 4 in the second, 2 in the third, 4 in the fourth, and 2 in the fifth to ensure a successful getaway. (Press Pros Feature Photos)