Once again they got good pitching and the big guns in the middle of the order came through.  The Buckeyes beat Hawaii Saturday afternoon for their fifth straight win.

Columbus – The way Abner Doubleday wrote it up originally…it went something like this.  If you want to win at baseball you get solid starting pitching, you field and throw the ball behind that pitching with consistency, and your best hitters deliver in timely situations.

For the fifth time in five days Saturday (and the sixth in their last seven games) the Ohio State Buckeyes followed the script, pounding out 13 hits, highlighted by Brady Cherry’s sixth home run, and beat the University of Hawaii for the third straight day, 7-5.

And as good as that sounds, perhaps the best part of the blueprint was the starting effort by redshirt freshman pitcher Seth Lonsway, who threw the first six innings surrendering 3 runs (1 earned) struck out 9, and walked 3.  He threw 102 pitches and dropped his earned run average under 5, to 4.91.

“It felt good,”  said Lonsway.  “I was just locating the fastball and curve for strikes when I needed to.  The curveball was definitely working for me today and that makes it easier to pitch.  Overall, I was very happy with it (the start).”

But the overall that really counts is the one that belongs to Greg Beals.

“It always starts on the mound and we got another quality start from Seth Lonsway,”  said Beals.  “He helped us weather things because they started their closer today, who’s very good, and we were able to weather through for the first three innings and finally get to him in the fourth and fifth innings.

“But we did a lot that I liked today.  We made some good plays on defense – we didn’t make some that I would have liked – and the play that Conner Pohl made in the ninth inning (on a ball hit down the line) was a big-time play.  That’s a double down the line if he doesn’t make that play and he helped his team win a ballgame with it.  Offensively we moved the ball, moved runners with the bunt a couple of times, we had our share of extra base hits, and the home run that Cherry hit over the batter’s eye in center was a bomb.  It gives you an idea of just how strong he is and that’s fun to watch.  But we left some guys on base and we had opportunities to get more.  But it’s great to learn from today because it’s easier to talk about it and learn when you win.” 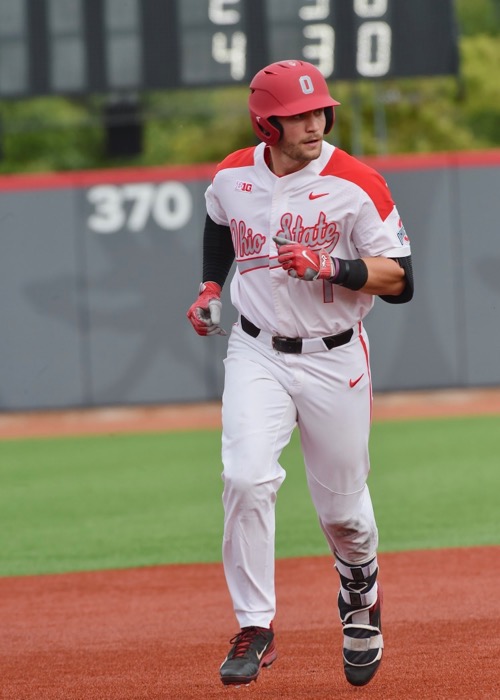 Brady Cherry got the Bucks on the board with his 6th homer, a mammoth shot that cleared the batter’s eye in dead center.

Cherry got things started in the fourth when he launched an absolute cannon shot to center off Hawaii starter Dylan Thomas.  Two outs later freshman centerfielder Nolan Clegg drove in two more with a single to center that increased the lead to 3-0.

But Hawaii is a resilient bunch and they came right back in the top of the fifth to score a pair of runs, aided by the Buckeyes’ only error of the game, on a groundout to first baseball and a wild pitch, one of Lonsway’s only really miscues of the day.

But an inning later the Buckeyes struck with more thunder and lightning.  They scored four runs on five hits and an error – a double by Canzone, a bunt single by Matt Carpenter, an RBI single by Cherry, another by Pohl, another bunt single by Dezenzo that scored a run, and Dillon Dingler reached on an error, scoring Conner Pohl from third base.  It stretched the lead to 7-2.

From that point the game rested on the bullpen, and not without some anxious moments.  Joe Gahm entered in the seventh and quickly gave up a pair of runs on two hits and a walk before Thomas Waning relieved him to record the final out of the inning, and then pitched a scoreless eighth.  Andrew Magno came out in the ninth to face four batters and record his team-leading fourth save of the season. 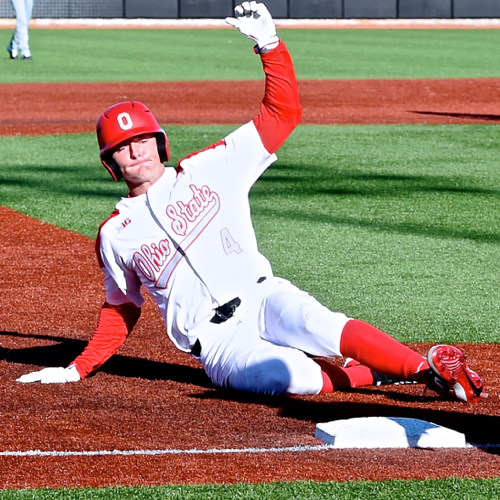 They got their share of extra base hits…Zach Dezenzo slides into third with his second triple of the year.

“It’s a big win four us because it gives us a chance to sweep tomorrow and have some real momentum when we get to league play next week,”  added Beals.  “I think Hawaii is a solid ballclub and we’re going to know over the next two weeks.  I hope it’s a really good team we’re beating because it’s a measuring stick for us.  They’ve pitched the ball fairly well, they’ve taken good swings, so I think they’re solid, but only time will tell.”

On a down note, the insertion of Zach Dezenzo at shortstop is now a permanent move with the news that Noah West will miss the rest of the season with surgery to repair a torn ACL, his second knee injury in four years. 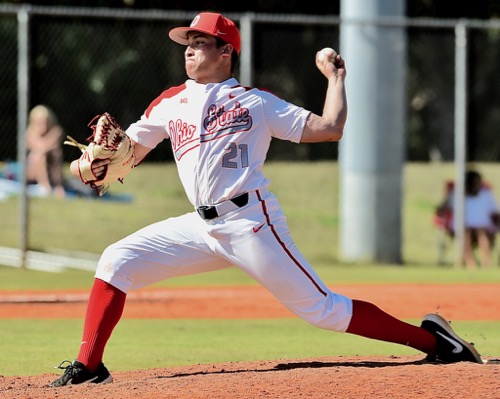 Andrew Magno pitched a scoreless ninth to record his team-leading fourth save.

“Noah West has played so well, but shortstop is Zach’s natural position and we’re very confident in his ability to step in and help us.  Now third base, for the time being, becomes a platoon situation with Marcus Ernst and Nick Erwin.  It gives us a chance to see more of these guys and we’ve liked what we’ve seen so far.”

They wrap up their four-game series with the Rainbow Warriors tomorrow, assumably with junior righthander Jake Vance getting the start.  First pitch is slated for 1:05 pm.

Beals and his coaches are cautiously holding their breath that the hitting holds out.  Over the past seven games they’re hitting .335 as a starting unit and Saturday the core members did not to hurt that consistency.  Brady Cherry went 2 for 3 (.400), Conner Pohl went 2 for 5 (.317), Dom Canzone went 2 for 4 (.299), and Zach Dezenzo continued to raise average with a 2 for 4 day (.288).

To Beals’ comment about feeling badly for Noah West, the junior from Westerville was off to his best start as a Buckeye.  In 19 games he had hit .284 with 6 doubles, a triple, and a home run with 9 runs batted in.  As to his replacement(s), Nick Erwin is hitting just .111, but with only 9 at bats (1 hit), but Marcus Ernst, with additional playing time is hitting .313 (10 for 32) with 3 RBIs. 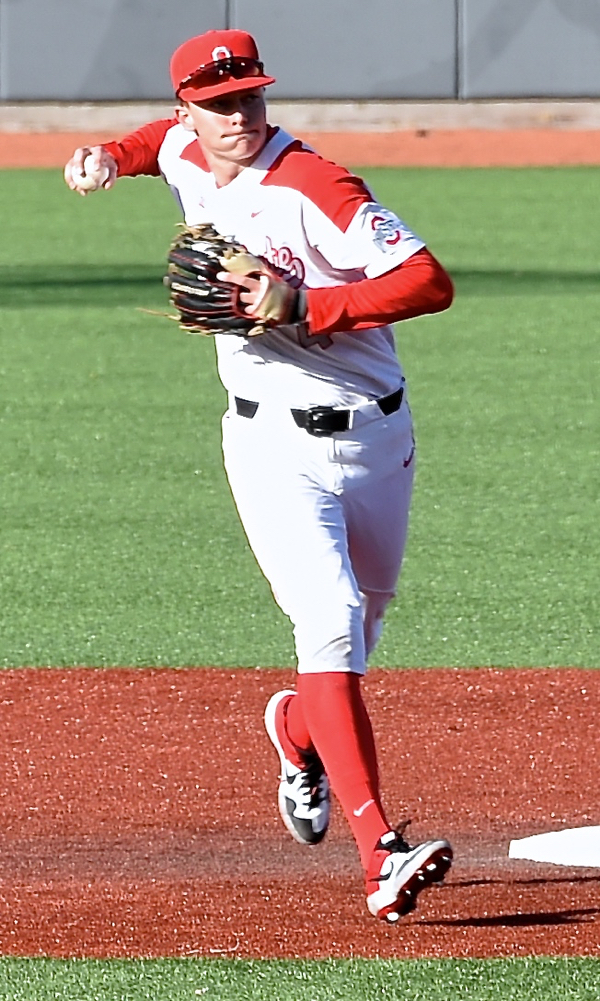 The move's now permanent...Zach Dezenzo has been moved to shortstop on a permanent basis with the news that Noah West is out for the year due to a knee injury.