They say you gotta’ be good, and you gotta’ be lucky to win a state championship.  St. Henry came up just a bit short on both ends in Friday’s loss to Berlin Hiland.

Columbus – It’ll go down as one of those days when you wish you had a mulligan.  That’s right, a do-over, perhaps – because in basketball, as in life, things have a way of evening themselves out.  Maybe, on another, different day…..

St. Henry fell to Berlin Hiland in Friday’s D-IV semi-final at the state tournament, 57-50, but not for a lack of effort, or preparation, or for just sheer will.  To a man the ‘Skins (24-4) wanted to win that basketball game in the worst possible way.  And for a while early in the second quarter it appeared that they might. 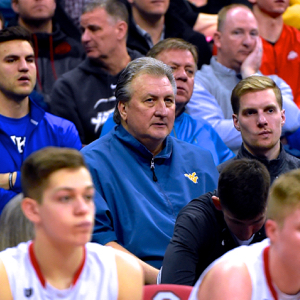 Leading 11-10 at the end of the first quarter they extended that lead in the second, going on a 7-0 run to increase their margin to 18-10.

But Berlin Hiland is a lot more basketball-wise than what meets the eye.  Not particularly tall, or physical, they’re a team of gifted shooters that’s expertly prepared by coach Mark Schlabach and they went on a run of their own – a 9-0 run that saw St. Henry go four minutes and six consecutive painful possessions without scoring.

“We got some really good shots during that run (of Berlin’s),”  said Eric Rosenbeck afterwards.  “We got Caden (Niekamp) some really good touches, and got some other good looks, but they didn’t go down.  And as a result they got some long rebounds off 3’s, shots we wanted to take, but it gave them transition opportunities.  It came down to us not making shots.”

And, it came down to a 22-20 halftime deficit and a feeling that as hard as St. Henry was to play on defense – and they did for 32 minutes – the ultimate outcome would come down to which team could steal momentum by making big shots at critical times.  The numbers at the end would not lie.

St. Henry came out in the third quarter and hit 6 of 8 from the floor, marginally better than Berlin Hiland, who hit 5 of 11.  As a result the Redskins inched just one point closer by the end of 24 minutes, trailing 37-36 after three. 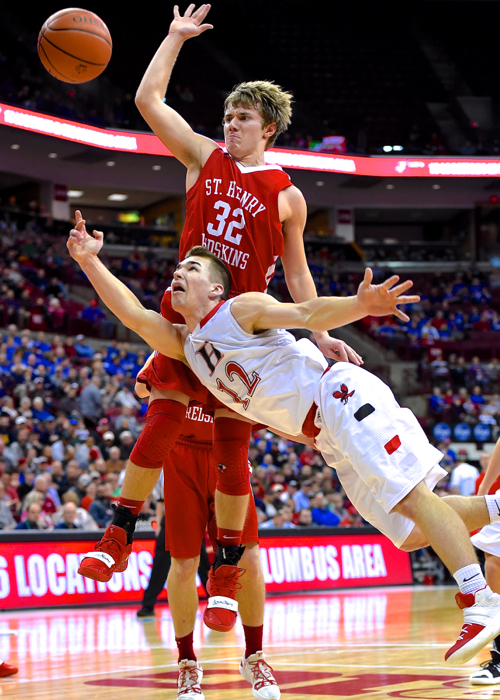 They were getting those ‘good looks’ about which Rosenbeck spoke.  Jay Knapke, who fought his heart out, would finish with 17 points.  Zach Niekamp complemented with 12 points of his own.  And the big man, Caden Niekamp, fought through double and triple-teams all game long to finally collect 13 points of his own.

But basketball is a matter of runs, as we spoke about, and timing.

And, it’s about luck, as all championships hinge upon to one degree or another.  In the fourth quarter, St. Henry had neither.

In capsule, Berlin Hiland made shots in the final eight minutes, and St. Henry didn’t.  Hiland, a gifted three-point shooting team throughout the year, hadn’t done much from behind the arc up until then, but they made up for it in those final eight minutes.  Kendall Hochstetler, their best shooter, later admitted that he had his pants on backwards in the first half, and when he discovered it at halftime it seemed to make a difference in the second half.  But how they got some of their opportunities hedged once again…on the matter of luck.

You cannot play without officials, and you cannot account for their judgment.  But two critical calls hurt St. Henry in the second half – a flop on a player control foul called on Jay Knapke, and a jump ball called when Hiland tied up Caden Niekamp midway through the fourth quarter…a delayed call that followed a lot of contact on the baseline as Niekamp tried to shoot.  After both change of possessions Hiland went down to their end…and scored on ‘dagger’ three-pointers.  Luck was no lady, in both cases, to the Redskins.

“I had no issues with the officiating,”  said Rosebeck afterwards.  “I thought they were fine.  But to the matter of luck…the 5o-50 balls, the deflections, a stolen pass by Riley Link, and a couple of rebounds…all those balls went to them.  Balls on the front of the rim that went in for them didn’t go in on our end.  There’s a half dozen things that I’ll replay in my mind that just didn’t go our way.” 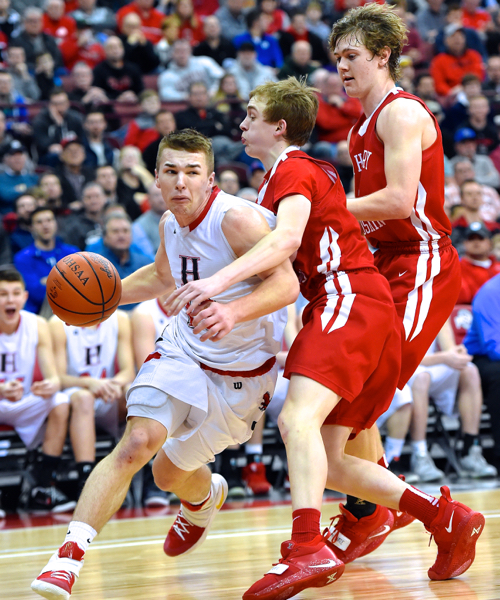 Berlin Hiland’s Andy Miller drives the baseline for two of his 14 points.

Hiland ran out to a 9-point lead of their own with four minutes remaining in the game.  Then, as if to tantalize, at the 3:39 mark of the quarter Zach Niekamp canned a long three from the wing.  One possession later, Caden Niekamp boldly fired one up from the same spot, with the same result.  49-40 was suddenly 49-47.

But Hiland is good for a reason.  The #1-team in the state called a timeout, spread the floor, deflated the ball and made the Redskins come after them…and foul.  And to that end they hit 1o of 14 attempts from the line in the fourth quarter by itself – 17 of 24 for the game.  St. Henry would never come closer than five points in the game’s final two minutes, despite having opportunities in the lane and on the line. 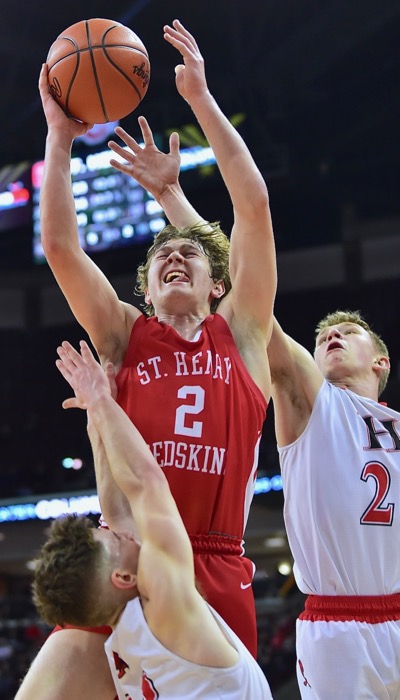 Jay Knapke fights through a pair of Hiland defenders to get two of his team-high 17 points.

But they simply had no luck, or at least…luck at the right times.

“St. Henry was the most physical team we had played all year, and we knew it would be that way,”  said Mark Schlabach in his post-game comments.  “Knowing that, we had three of our hardest practices this week – the most physical practices – to prepare for today.”

But the style of play between the two teams was similar enough to where the bumping and the banging evened itself out.

“Can’t fault our effort or how hard we played,”  Rosenbeck told me afterwards, disappointed that their run together, and with a competitive group of seniors, had finally come to an end.  “But for whatever reason with basketball, it just didn’t go our way…and I guess that’s life.”

Life, and legacy, as more than one great basketball coach on this same stage has maintained for years.  You have to be good to get here, of course…….

“But you gotta’ be a little bit lucky,”  added Rosenbeck as he left to be with his team. 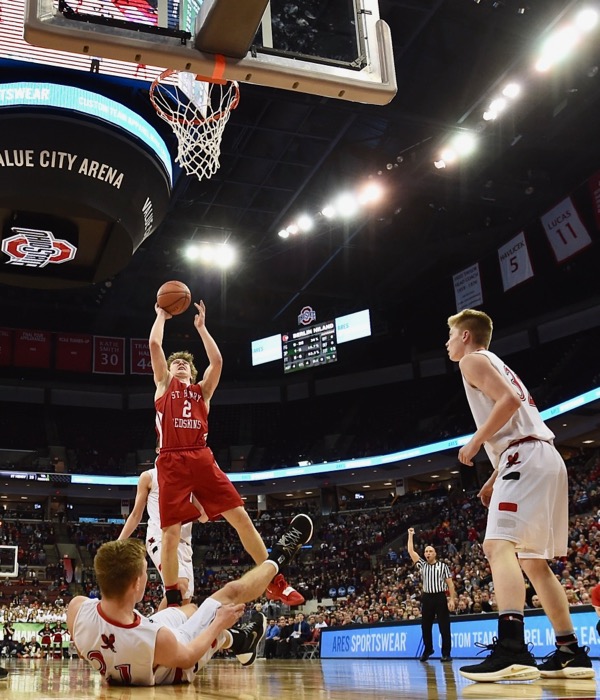 No Luck….Critical charging call on ‘Skins Jay Knapke in the fourth quarter negated a bucket and resulted in a made ‘three’ on the other end.

“The Spot” Restaurant, in Sidney, congratulates the St. Henry Redskins for their appearance in the 2019 OHSAA State Basketball Tournament. 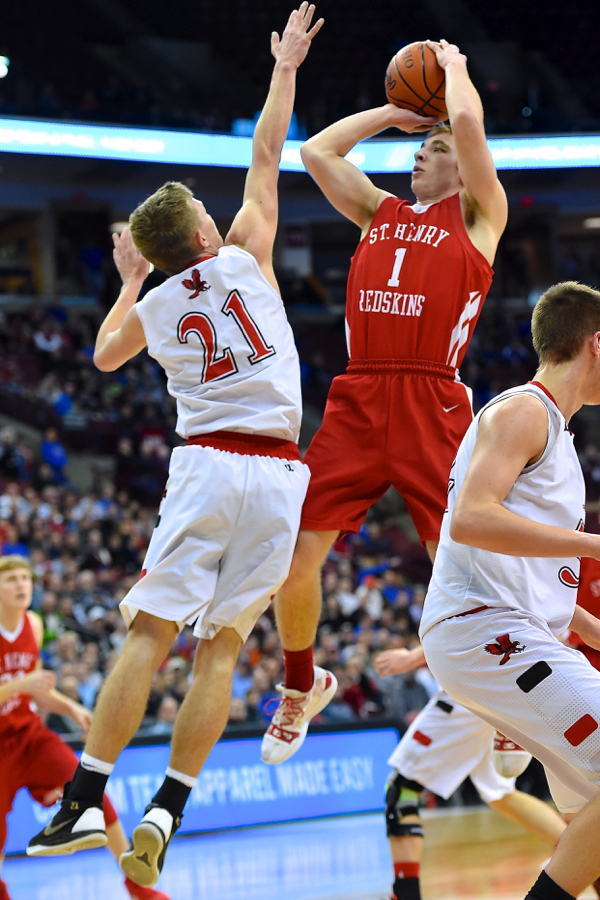