Buckeyes Defeat Hawaii 6-5 With A Bit Of Everything

Two homers by Dom Canzone, one homer by Brady Cherry, and a slick relief appearance by Root leads to Buckeyes’ 4th straight victory.

Columbus – If Ohio State’s game highlights had aired on ESPN Sports Center on Friday night, they would have started with Dominic Canzone leading off the first and third innings with home runs and putting a match to the winning rally in the seventh by leading off with a double.

Then the cameras would focus on Brady Cherry hitting two singles and a solo home run, the latter pretty much brought to you by Mother Nature because of a hard wind blowing to right field.

Finally, there was the sacrifice fly by Conner Pohl and run-scoring single by Zach Dezenzo in the seventh that delivered the Buckeyes a come-from-behind 6-5 victory over Hawaii at Bill Davis Stadium.

But there was so much more to Ohio State (12-10) continuing to build momentum with a four-game winning streak and taking five of the first six games on this nine-game home stand.

“We’re righting the ship, so to say,’’ coach Greg Beals said. “I think it’s critical that we won a one-run ballgame.’’

The players whooped it up in the clubhouse afterward, but, no, forget the bodacious proclamations at this point.

“We’re starting to feel it a little bit,’’ Canzone said.

There was another freshman, Will Pfennig, striking out pinch-hitter Logan Pouelsen with a nasty breaking ball around the ankles to end the game with the tying run on third.

There was third baseman Marcus Ernst gloving a ball hit to the hole in the seventh with a runner on third, performing a 360-degree spin and throwing a dart to first to end the inning.

And, finally, there was Pohl starting a double play in the eighth by catching a low shot at first and throwing perfectly to second for the tag out. 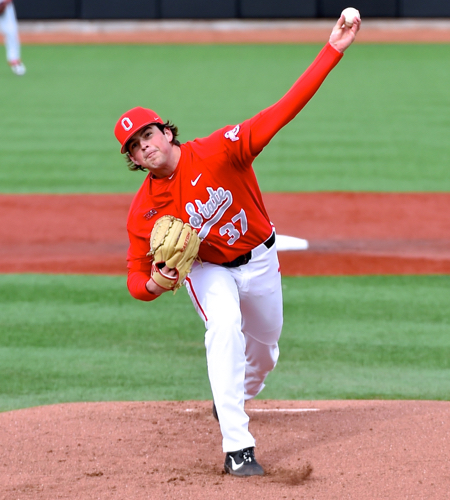 Griffan Smith cruised through the first four innings, but ran aground in the fifth.

Just like that, the pain and angst of losing all four games at The First Pitch Invitational in South Carolina seems like it was left in a trash can in an interstate restroom on the way home.

All of this has been accomplishment playing in weather that simulates standing on the deck of a ship in rough waters in the North Atlantic.

“If I start sweating it’s because I have so many clothes on,’’ Beals said at the press conference.

Canzone has been a ringleader in the rise. He began the game batting .269, but is beginning to show why he’s the team’s best all-around batter. The first home run came on a 2-and-2 pitch and went to dead center. The second was on the first pitch and went to right.

“I’ve just been grinding it out a little bit, hitting some balls hard at people,’’ he said. “At the same time, my teammates have had my back all year. I struggled a little bit at first, but I’m starting to get into the groove a little bit. It’s a lot easier when guys are hitting the ball all over the place.’’

When the game was on the line, Canzone hit the first pitch he saw into the right field corner for the stand-up double in the seventh.

Matt Carpenter tried to bunt Canzone to second, but was safe for a single with a perfectly placed ball up the third base line. Both runners advanced on a wild pitch with Cherry batting.

Pohl drove in the first run with a sacrifice fly to left and Dezenzo the second on a clean single to right. 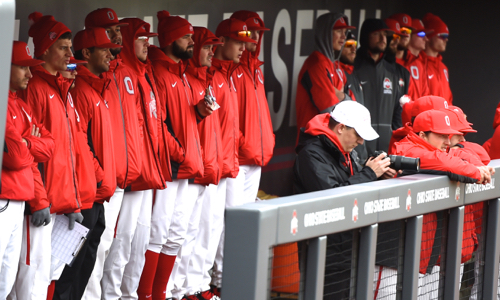 “The offense is working to put great at bats together, hitting the ball hard and good things will happen,’’ Canzone said.

Canzone was 3-for-5 with two runs batted in and three runs scored, and Cherry was 3-for-4. That’s six of the team’s 10 hits by two men.

“Obviously, Canzone and Cherry had big days for us, and we need those guys,’’ Beals said. “Those are the marquee guys in our lineup, and you need your big-time players to play in order to win games.’’

Cherry isn’t about to rehash the team’s struggles, especially at The First Pitch Invitational, but said the Buckeyes will be better for it in the long run.

“Having those early games, win or lose, was big for us to get the younger guys experience so they have it later in the season for games that really matter,’’ he said.

The fourth straight win, though, came in grinding fashion.

For four innings, it looked as though sophomore left-hander Griffan Smith would be a handful for Hawaii. Between the second and fourth, he allowed only a single to right.

But in the fifth Smith gave up a leadoff single to Dallas Duarte and walked Tyler Murray on a full count before getting the first out. 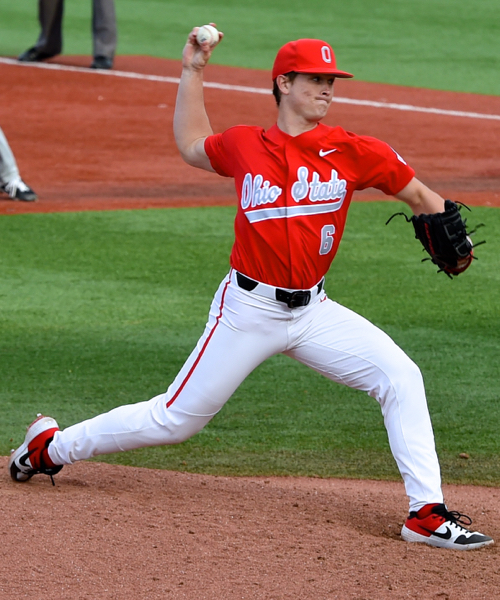 Bayden Root came on in the sixth to record his second win of the week.

His problems continued when Scotty Scott drove in a run with a single to right. Everything mushroomed when Daylen Calicdan singled to center for the second run and a third scored when the ball bounced off Dillon Dingler’s chest and about 12 feet to his right for an error.

Smith walked Alex Baeza, gave up a sacrifice fly to Ethan Lopez and walked Max Crabbe before Root came on.

“Griffan just came really fast on us,’’ Beals said. “He was cruising there the first four innings. He just wore down a little bit. He was getting underneath the ball a little bit.’’

Root thought his time wouldn’t come until way later, and was in the clubhouse stretching.

“I was in here rolling out because I was a little stiff,’’ Root said. Coach DeLucia came in here and said, ‘Root, get going. I said, Okay, here we go.’ I took off my sweatshirt and took off my jacket and was throwing down there in long sleeves.’’

The long sleeves came off because they were too constricting. So there he was, barely warmed up and standing on the mound in the middle of chaos.

Root got Maaki Yamazaki on a grounder to shortstop and continued to roll. 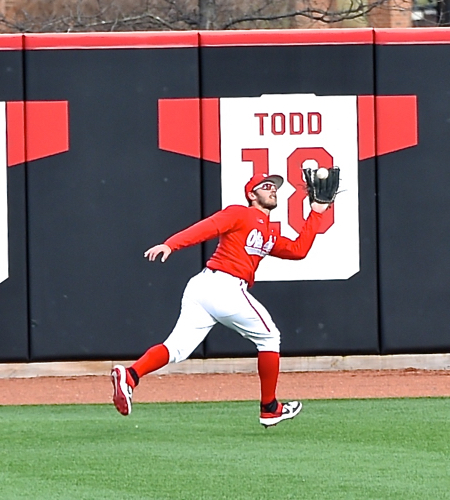 “I was getting ahead with my fastball and tried to throw my slider for strike two,’’ he said. “Once I got that No. 2 pitch mixed in I was pretty hard to hit. I was getting some roll over contact early in the count and throwing my fastball on the outer half and at the bottom of the zone. I was establishing a lot of weak contact. I started feeling good and got into a good rhythm.’’

His only difficulty came in the eighth when he walked Max Crabbe to lead off the inning.

Pohl started the double play, but Duarte and Murray singled to start trouble again before Root struck out Tyler Best.

“When you have guys like that behind you picking it, that just gives you so much confidence as a pitcher,’’ Root said.

Recent bad history with the bullpen screamed that Beals should have started to sweat in the ninth underneath all that cold weather gear.

Pfennig did give up a leadoff single and walk, and both runners advanced on a sacrifice bunt by Baeza. But he buckled down to get Lopez on a grounder to second and struck out Poulsen.

“We’re forging ourselves in fire,’’ Beals said. “These young pitchers are getting out there – Will Pfennig in a closing situation – and succeeding. That was good to see.’’ 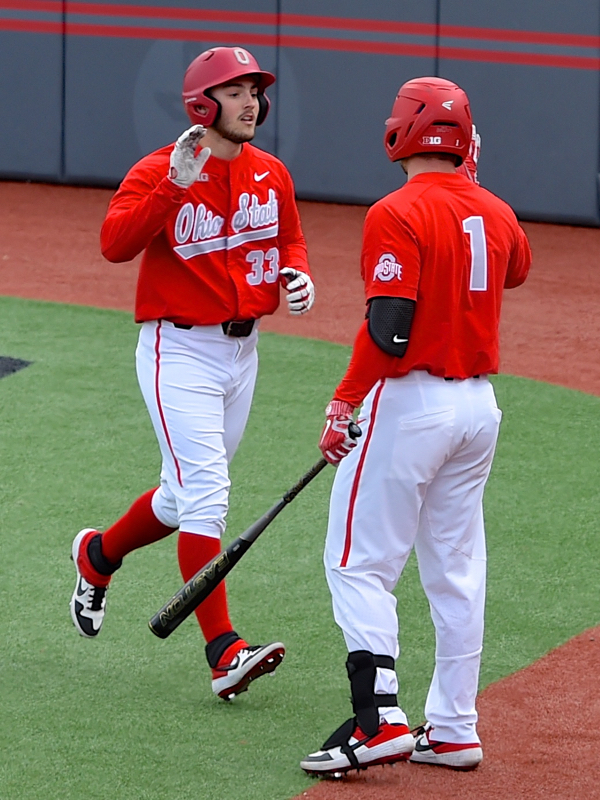 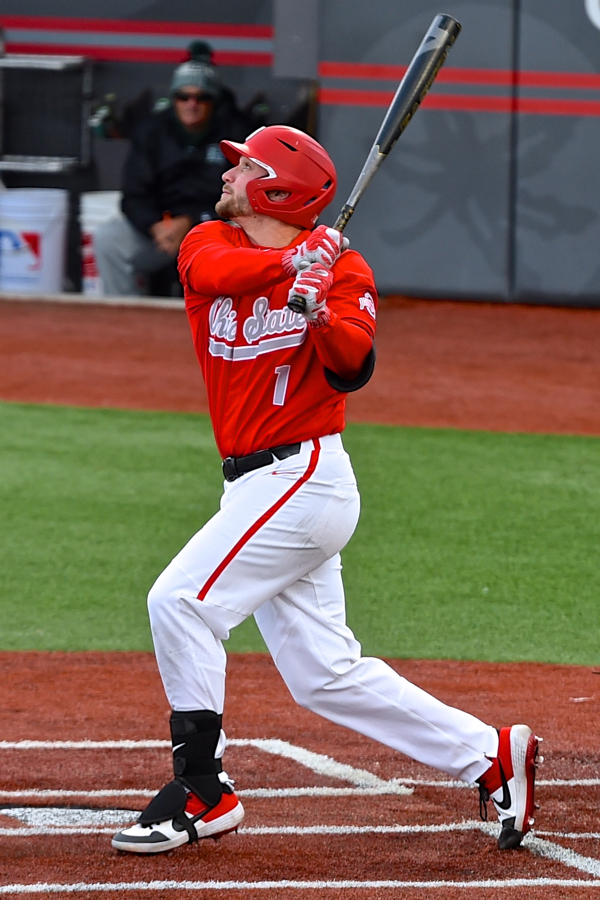