They hit their customary century mark in scoring, and left a trail of exhausted bodies in their wake.  #1 Trotwood wins convincingly over Akron Buchtel to advance to Saturday’s championship round.

Columbus – There were a lot of people (10, 843) and one majority reason for most of those people to show up Thursday night to watch #1-ranked Trotwood play Akron Buchtel in the D-II semi-final.

That being…they wanted to see if Trotwood could hang a hundred points on a Final Four opponent at the state tournament, and the Rams did not disappoint.  Leading 76 to 46 at the end of three, Trotwood blasted through to a 26-point fourth quarter to win 102 to 72, the thirteenth time this year they’ve hit the century mark.

In addition, their 102 points marked the fourth time in tournament history that a team had broke the century mark.

And they did it the way coach Rocky Rockhold planned it.  They kept the pace at a frantic pace, they swarmed on defense, and they simply made Buchtel into a turnover machine.  It times it resembled a NASCAR race, but that’s how Rockhold and Trotwood like it.  Turnovers and points off turnovers.  They don’t take many jump shots, because they don’t have to.

“Tonight I think we came out and executed,”  said Rockhold, in his eighth year at Trotwood.  “We preached pace, we practice pace, and this is how we want to play.”

And the stats bear out how Trotwood-Madison averages a hundred points a game, and leaves teams and fans alike breathless in their attempts to describe, or defend, it.

They turned Buchtel over 30 times Thursday, and scored 44 points off those turnovers. 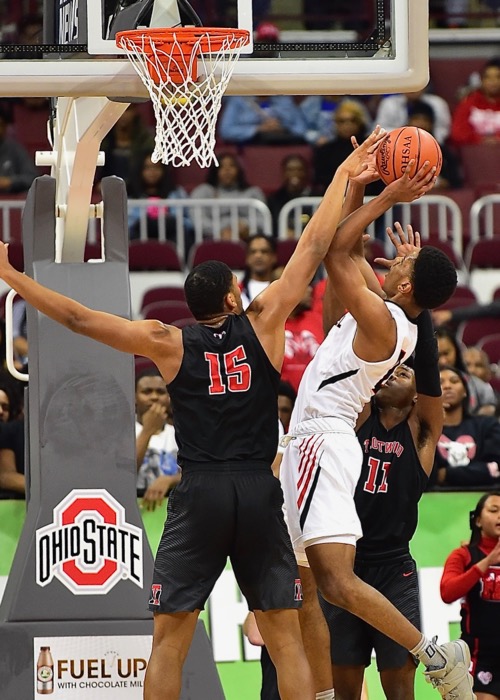 They scored 31 points off fast breaks, to Buchtel’s 9.

And, they hit the boards with a vengeance, scoring 19 second-chance points to Buchtel’s 7.

It’s hard to draw up, or imagine, a more convincing win.  And if you weren’t convinced by the scoreboard, you got the idea when Trotwood left much of its core lineup in the game until the game’s final minute.  The last five subs on the bench came in with 59 seconds remaining.

“I’m happy with the way we played tonight, especially our intensity and how we played defense,”  added Rockhold.

Akron actually came back from a 10-point first half deficit to tie the game at 27-27 midway through the second quarter.  But Trotwood used that lapse, as Rockhold would later call it, to go on a 10-0 run and extend their margin back to a 50-37 lead at the break.

“This is as much like Trotwood as we’ve played in the semi-finals,”  said Rockhold.  “And our defense was responsible for that.  We work hard, we practice hard, and tomorrow we’ll be back in the gym practicing for Saturday.  There’s no such thing as a walk-through for us.  It’s hard, these guys know it’s going to be hard, and they’re accustomed to it.” 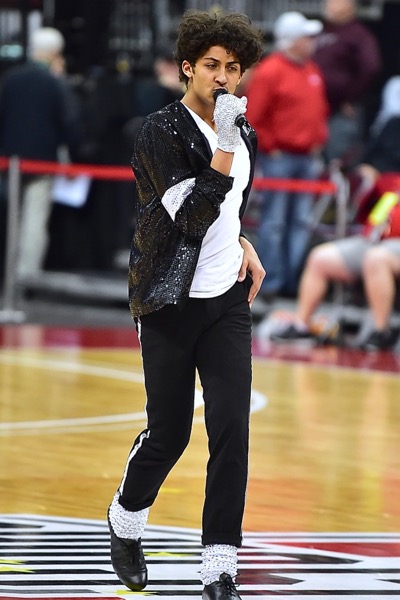 They never had this at St. John Arena…Michael Jackson impersonator entertains during halftime of the Trotwood-Akron Buchtel game.

It also sets up an anticipated Division II final on Saturday with Columbus South, ranked #2 in the state, and entering the game with a 27-1 record – their only loss coming to Columbus Walnut Ridge, back in January.  Unlike Trotwood, South has yet to score a hundred this year, but plays with the same kind of toughness and defensive intensity.

“Their guards are very good,”  added Rockhold, whose Rams beat South last year in the regional round.  “They capable of handling the ball against pressure and in an atmosphere like this.”

“I’m excited to play,”  said Amari Davis, who led Trotwood and all scorers with 33 points.  Carl Blanton added 21, Sammy Anderson had 15, and Keon’te Huguely had 11 – four to score in double figures.

“This is my last year and we’ve prepared for this all year.  The target’s been on us.”

“But,”  added Rockhold, “we want to flip things and put the pressure on the team we’re playing.”  That’s how Trotwood plays.

No argument from Akron Buchtel, who finished its year with a 20-8 record. 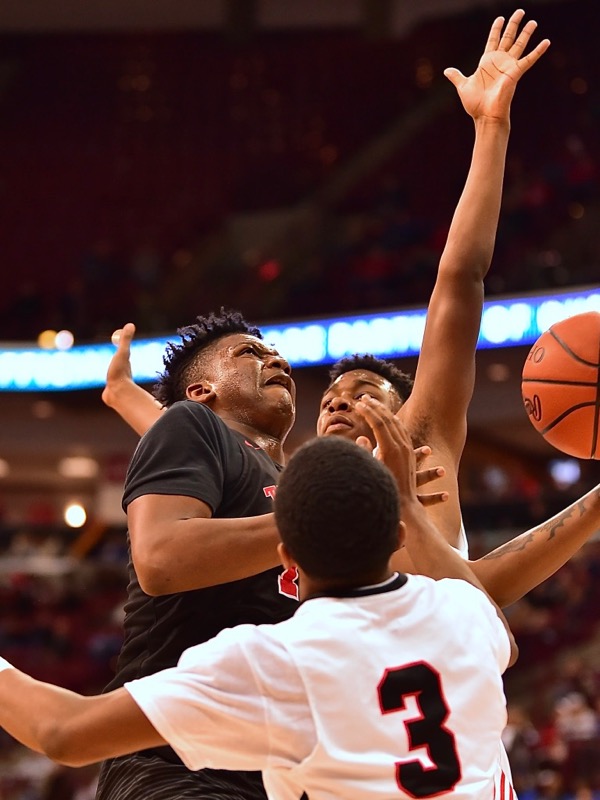