How I Got Taken To School…By ‘Ol Ben

It was the summer of my greatest lesson in life.  That is, don’t count your chickens before they hatch;  and never underestimate the value of experience.  I learned that old eyes, and old habits, go down hard.

(Ed Note:  After nearly a year’s absence from Press Pros, we’re happy to welcome the return of free lance writer Tom Cappell, whose style and reminiscences of hunting, fishing, and the outdooors has been a popular addition to the Press Pros pages for the past five years.  One of the country’s best story tellers of days afield, enjoy one of his latest…sponsored by our friends at Olde English Outfitters, in Tipp City.)

It had been talked about for months, as it was every year.

The big ‘money’ shoot at the fairgrounds, where the best shotgunners in the county, far and wide, made their way to the county seat for a crack at a $500 purse, and the pride of being king of the hill for at least a year.

It was the annual clay bird shoot during Frontier Days each summer.  It was 1964, and this was going to be my year – the year when practice and purpose would pay off handsomely, and maybe – just maybe – satisfy my ambition for braggin’ rights, once and for all, as the best shot in the county.

I had practiced.  Oh my, how I had practiced.  Box after box of targets behind Uncle Mel’s barn.  Box after box of Winchester shells at a time when no one had the extra money to waste on shootin’.  And the time?  Who had time for the frivolousness of a shooting clay birds with a shotgun, when one should be working to pay bills, for school, and to have a few dollars in the bank.  But $500 was a lot of money in 1964.  A twenty dollar bill was like a fifty nowadays – a hundred spent like a thousand.

But more, it was just important to win and prove that it was me, not Finn Doubleday, that was king of the hill in Boone County with a shotgun.  Finn was three years older than me, you see, and some say that he did nothing but shoot, supported by the advertising budget of a local car dealer who proudly advertised that whatever it took to win your business, thinking you were bound to remember a trick shot artist like Finn as a reminder when it came time to buy.

In truth, it was that dealer who put up the prize money, and some had questioned if the thing hadn’t been rigged for the past three years, as Finn would walk up to the stand and claim the $500 while proudly thumbing through the stack of $50 dollar bills.  You see, Finn, and Murty Donnelly, the Chevy dealer, were all about display.  Murty, for instance, was known for sticking an extra $50 in the shirt pocket of the scorekeeper before the shoot…just to “keep things honest”.  And nothing was questioned more than whether Donnelly, or Doubleday, was actually on the up and up!

I was shooting Uncle Mel’s Winchester Model 12 pump, a gun he’d proudly bought one year in the early 50s to celebrate a good crop year on the farm.  Uncle Mel was a hunter, and a fine shot in his own right.  He was my mom’s oldest brother and he had taken me under his wing at an early age to show me the fun and lessons to be learned from nature and the outdoors.  I claimed my first rabbit with Uncle Mel, caught my first catfish, and when I was old enough he took me out behind the barn and taught me the trick of shooting clay targets – of making a thrown disc disintegrate with a puff of smoke when you centered it with a pattern of small buckshot.

I got good at it, and I got good fast.  And Uncle Mel would laugh and slap his thigh as one after another I made those clay targets disappear on hot Missouri evenings.  I entered my first contest when I was 16, and was beaten badly by the older guys, the veterans who knew not only how to shoot, but how to compete, as well.  You shot 50 targets and highest score won, of course.  And usually there was a shoot-off to break a tie.  The competition was always tense, interesting, and it drew a large crowd to the grandstand at the local fairgrounds.  The participants would stand on the dirt race track in front of the stands and God forbid how they would call your name over the loudspeaker if, and when, you missed.  It was a long walk behind the line of shooters to the gate and out of the competition, and in front of all those people and the catcalls.

But let me get to the story. By now I was 20 and it had been the best year of my life.  I was a student in the University of Missouri school of business, I had become engaged, and I was making some money working around school for a local retailer.  And on evenings after work, I was shooting up a box of clay birds behind Mel’s barn and benefiting from the tips he could offer.  I was good, and I was ready for Frontier Days.

“You know that Finn and the others are going to be watching you,”  he’d say.  “Best thing to do is center the target.  Don’t ‘chip’ it with the edge of your pattern.  Break the damn thing hard.  ‘Smoke’ your targets and put the pressure on them.  Let them see just how focused and confident you are.”

The day of the shoot came bright and sunny, but hot.  Man, was it hot.  And one by one the participants lined up on the track with their guns and boxes of shells.  The starter called to the crowd for any last shooters – last call – but no one was expected outside of the 30 or so already lined up, each with a ‘second’ standing beside him.

But then…an old man came through the gate, waving his hand, and asking for an extra minute to make his way to the line.  “It’s Ol’ Ben Ruffner,”  Uncle Mel whispered to me, as he watched him slowly make his way down to the end of the line.  “Haven’t seen him for years.  Can’t believe he can still shoulder a shotgun.  He used to win this thing…ten straight years.” 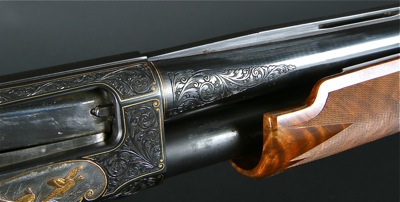 But apparently he could, and for whatever reason he had chosen this year to make his reappearance.  He was ninety if he was a day, a war veteran from WWI.  And they say he was an Army sharpshooter in France, and one of the best in the whole US Army with his Springfield Model ’03.  As his second (the person who handed him shells and claimed the empty after he shot), his daughter was there to lend her support.  His shotgun looked older than him – and old Remington Model 31 with a broken stock, reinforced by electrician’s tape.  No one really took him seriously anymore, but like Uncle Mel, there were those who remembered;  and no one who did took him lightly, either.

The competition was fast, and intense.  One by one shooters would eventually miss a target thrown by the mechanical thrower placed about 25 yards in front of the line.  It came down to six, then five, then four, including me, Finn…and Ol’ Ben.  I did what Uncle Mel had told me to do.  I centered every target, tried to break them with a puff of black smoke – tried to intimidate.  It might have worked, or not.  Finn shot just as well, and Ol’ Ben, though slightly stooped, seemed to break his targets with an ease that made the rest of us uncomfortable – like he was incapable of missing.

And then there was the three of us.  We had all broken fifty straight, then another twenty five, and on the 90th target Finn shockingly missed a straightaway that seemed to dip in the breeze at the second he fired.  He was fuming, embarrassed, and called for a ‘challenge’, where a second set of eyes could confirm or deny the original call of a legal target by the scorekeeper.  It was confirmed that he had missed, and he walked slowly through the gate and quickly disappeared into the crowd.

It left Ol’ Ben and me.  By now we had each broken a hundred straight and they paused to reload the machine and bring more shells to the track.  Ben’s daughter brought him a cool drink and an umbrella to shield him from the blazing sun during a short break.  He’d occasionally look my way and smile, but he never said a word during the entire afternoon.  He just kept smoking those targets, one after another, and then he’d watch me intently as I tried to match.

The pressure was mounting.  Me, 20 years of age, shooting against an old man four times my age, who while a bit bent at the waist and withered from the years, was proving he was capable of turning back time.  I could hear them talking behind me.  Surely the kid with the young eyes and reflexes would eventually win.  He’s bound to wear him down.  But youth be damned, this old man could shoot.

We each broke the next twenty five, but on the 126th bird…I missed – a hard angle to the right.  Ol’ Ben got the last shot, and he got the identical target by the luck of the machine. You could have heard a pin drop as the crowd hushed behind us.  He paused for a moment, as if for effect, before calling for the target.  And as it rose against the sky it seemed in slow motion as the gun cracked and the target simply vanished, so pure was his aim there was hardly ANY smoke!

He turned to me and smiled, offering his hand.  Then, he turned and slowly walked away, his daughter supporting his arm while carrying that old Remington shotgun.

“Let that be a lesson to you,”  said Uncle Mel with a chuckle.

“Well, you’ve got a lot of time left to shoot,”  he offered.  “And never take it for granted.  Never quit learning.  You just got took to school…by Ol’ Ben.” 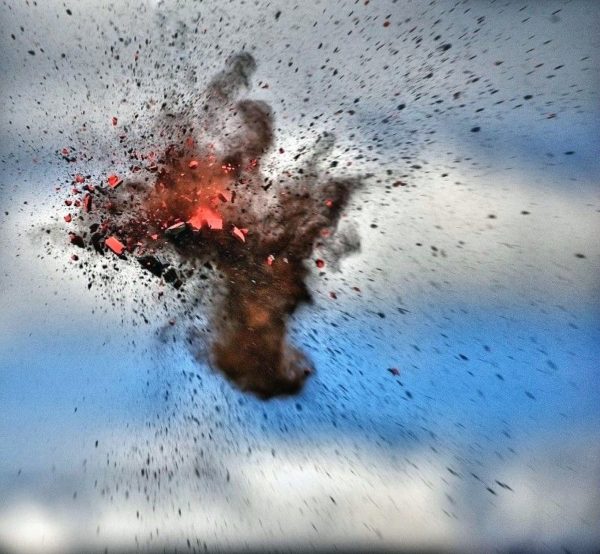 "Center your target," Uncle Mel advised. " 'Smoke' your targets and put the pressure on them. Let them see just how focus and accurate you are." (Photo Supplied By The Author)