The further you go, the more it hurts when it ends. Anna’s sensational season comes to a sour end as Purcell Marian rolls in the Regional Final.

Unfortunately for the Rockets, that was the highlight of the night.

Anna went 4 minutes and 40 seconds without a point in the second quarter as the Cavaliers took control, then went without a field goal for the first 5 minutes and 20 seconds of the third quarter. The two droughts spelled doom for the Shelby County League champions, who fell by a final of 67-56. 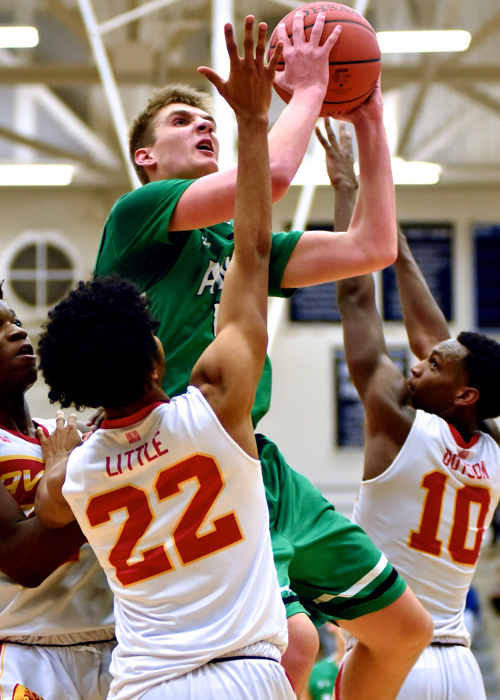 Griffen Doseck saw his Rockets career come to a disappointing end in the regional finals.

“This is really tough,” said Anna coach Nate Barhorst when he finally emerged from the locker room. “With everything we do, it’s year-round anymore. To lose those two guys (seniors Griffin Doseck and Carter Elliott) who have given everything they have to our program the last four years, it’s really emotional. You try to hold it in, and then it all comes out in there because it’s over.”

The game went back and forth in the first period. Elliott hit three free throws after being fouled on a trey attempt, to tie the game at ten. After the Cavaliers scored 4 quick points, Anna went on a 7-0 run, capped by a Bart Bixler three-point play, for a 17-14 lead.

Purcell Marian led 23-21 early in the second quarter when the Rockets offense suddenly disappeared. The Cavaliers scored 11 unanswered points before Bixler scored right before the half, sending the Rockets to the locker room down 34-23.

Things started to go bad for the Rockets even before the offense dried up. Purcell’s Michael Little shot a wide open three off the side of the backboard, and the ball caromed to an open Javonta Lyons, who was minding his own business in the middle of the lane. He scored easily.

The Cavaliers also scored after the officials missed an obvious double dribble right in front of the Anna bench, which almost sent Barhorst into cardiac arrest.

“The second quarter really hurt us,” Barhorst continued. “They got some long rebounds, we didn’t hit shots we normally hit, and it seemed like our ball movement wasn’t what it usually is. That goes to Purcell Marian. They are long, they are athletic, they get in the passing lanes, they are intense on defense, and it rattled us a few times.”

Anna was just 3 of 10 from the floor while being outscored 18-6 in the second quarter, and things got worse offensively after the break. Anna’s only two points for the first 5 plus minutes of the third quarter was a pair of free throws from Doseck. Isaac Lininger finally broke the spell with a basket, but by then the Cavaliers had a 17-point lead. 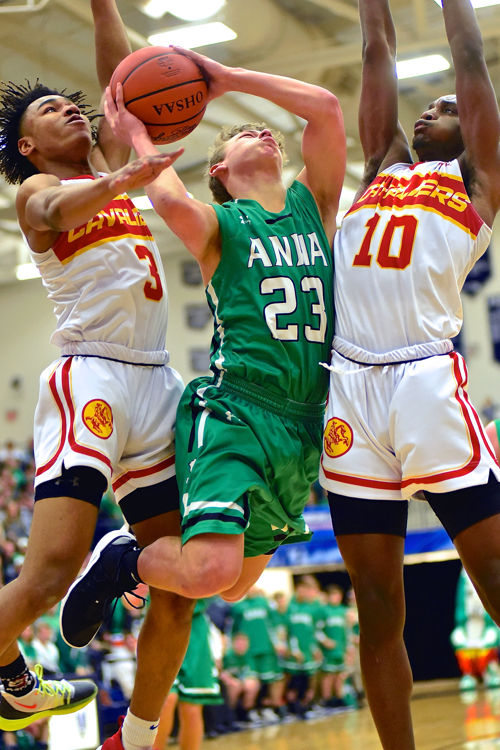 “We tried to go zone a couple of times, and they made us pay,” Barhorst acknowledged. “We knew they would be more disciplined against the zone. We knew man was going be our main staple, and they played very well when we went zone, so we had to go back to man. That’s a very good team.”

The Rockets had one chance to make a fourth quarter push. Doseck scored on a slam to cut the margin to 14, and Anna quickly forced a turnover. With the big Anna crowd on its feet thinking a comeback was possible, Riley Huelskamp’s three pointer bounced off the iron, Purcell Marian got the rebound and scored at the other end, and the Rockets never threatened again.

“We are usually pretty good about getting back into things, but we could never get that one run to change things around,” sighed Barhorst. “We could just never get to that one point. Then they sealed the deal the last 3-4 minutes at the foul line.

“They got some calls that went their way. I am not saying the game was poorly called, but we just couldn’t get a break when we needed it.”

Offensively, the Rockets had their best quarter of the night in the fourth, pouring in 26 points. The Cavaliers refused to cooperate, however, making 19 of 24 free throws in the final 8 minutes to keep the Rockets at bay. 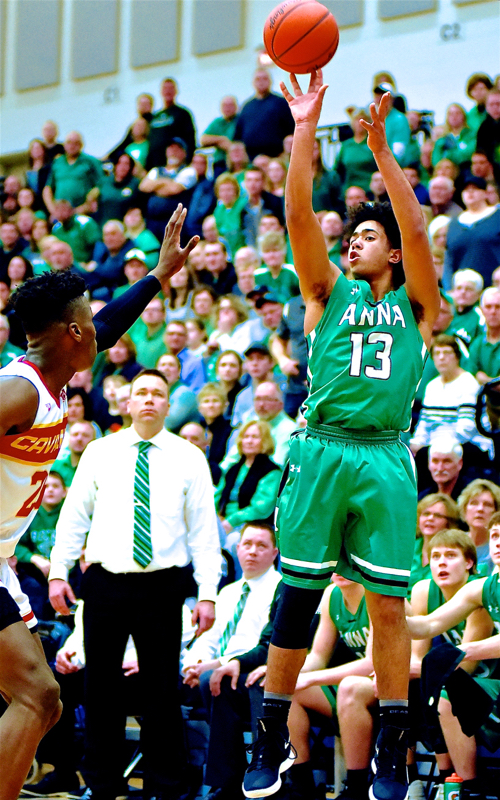 Kam Steward shoots in front of the watchful eye of coach Nate Barhorst.

Doseck closed out his sensational career with a team-high 18 points, 12 in the second half. Bixler finished with 15, Huelskamp had 8, and Kamren Steward contributed 5 off the bench. Elliott, plagued by foul trouble all night, managed just those three first quarter free throws and fouled out with 6:11 left in the fourth quarter.

Purcell Marian, which improved to 23-5 on the season, got a game high 20 points from Bryan Warah, who for some reason didn’t start. When he did get on the floor, he was unstoppable, making 6 of 7 shots from the floor and 8 of 10 from the line. Javonta Lyons added 14, Alex Dotson had 9 and Michael Little added 8.

The Cavaliers had a significant 32-21 advantage on the glass, including 9-6 on the offensive end. They had a 12-4 advantage in second chance points and, thanks to Warah, a 28-8 advantage in bench scoring. The Cavs had 13 turnovers to Anna’s 11.

“It’s tough to get here,” Barhorst said of the Rockets first regional appearance since 2010. “You have to have talent, which we did, and you have to have a little luck for the ball to bounce your way. Tonight, we didn’t get some of the bounces we had gotten all year. If we knock down a couple of more shots, maybe it’s a different story, especially in that second quarter.”

Despite the ending, Barhorst said the Rockets had much to be proud of.

“We had great accomplishments this season. Tied for the most wins in Anna basketball history, great senior leadership from Griffin and Carter, and underclassmen who understood what it took to step up and almost play like seniors. Just really proud of these boys. That’s the bottom line. They gave 110% every step of the way this season. It’s just unfortunate that it had to end tonight.” 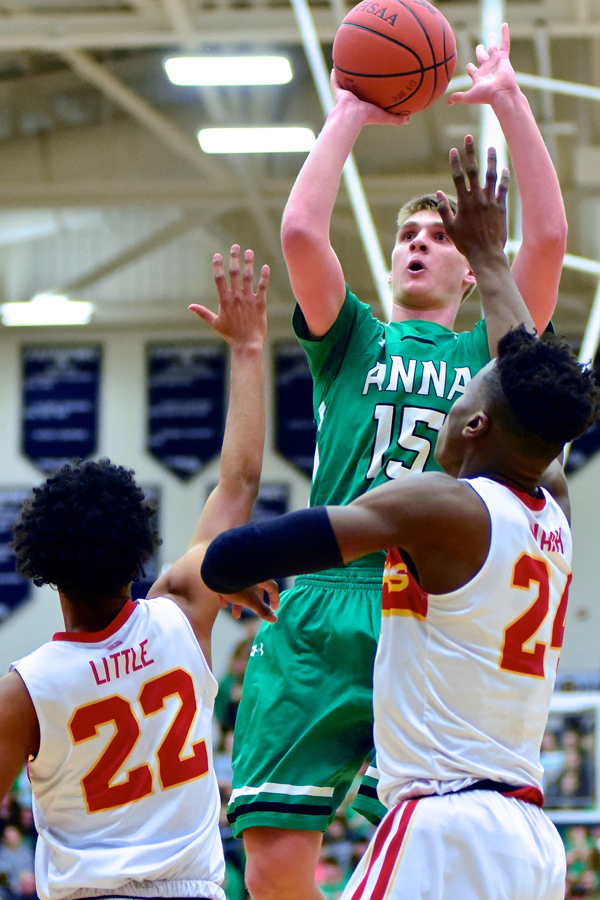 Griffen Doseck rises to shoot over a pair of Purcell Marian defenders. 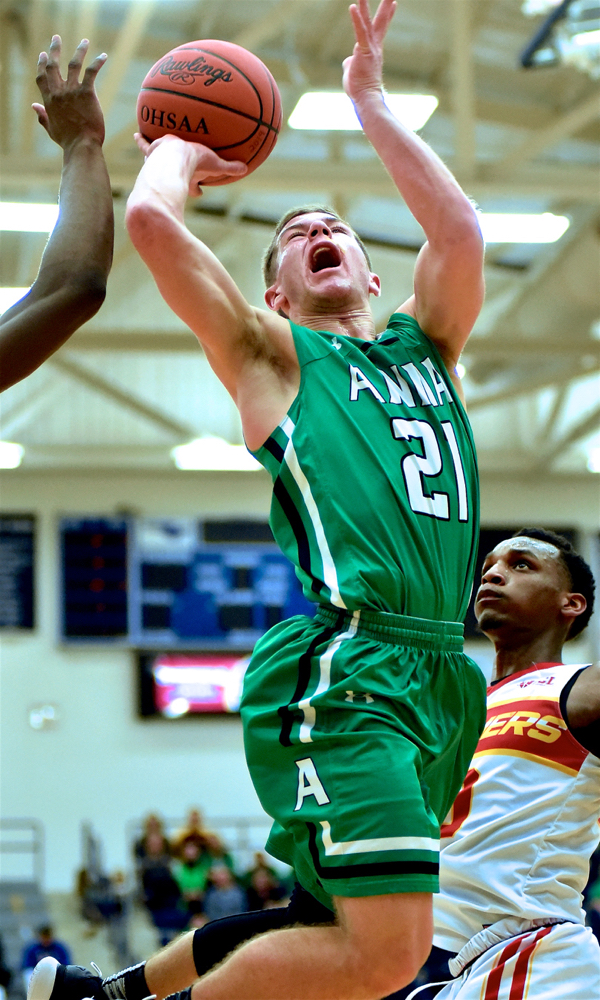 Anna's Riley Huelskamp fights to get to the rim during the Rockets' scoreless drought in the third quarter. (Press Pros Feature Photos By Dale Barger)